Minecraft Dungeons is the latest spin-off of Mojang’s iconic franchise. This time around, you get a CRPG-lite that takes on the formula made popular by Diablo. It seems like a winning idea, and I enjoyed my preview of the game at E3 last year. However, I expected that there would be more to Minecraft Dungeons upon its full release.

Minecraft Dungeons is fun to play, but it doesn’t break boundaries, even as far as the Minecraft franchise is concerned. It’s no surprise that Mojang aimed this title towards younger audiences; kids love Minecraft. However, the devs made the mistake of confusing “child-friendly” with “dumbed-down.” As a result, Minecraft Dungeons is likely to miss the mark with players who are most likely to buy it: parents who loved Diablo and want to share the experience with their kids. 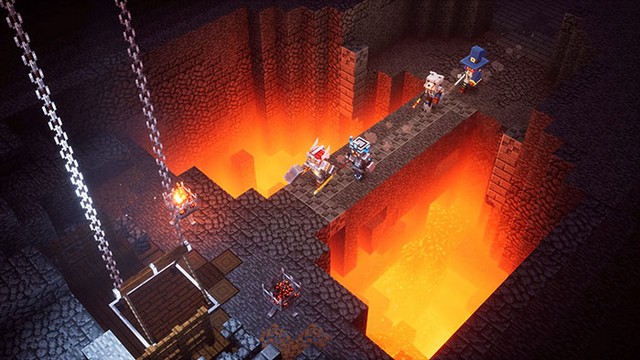 Lore and story help drive dungeon crawlers forward. Picking up that next sword or piece of armor feels more vital when there’s an exciting world crafted around your struggle. Unfortunately, there’s almost no story in Minecraft Dungeons to serve as a framework for your travels and loot seeking.

The inciting incident which leads you to quest through the world of Minecraft Dungeons centers around an illiger. This particular illiger grew tired of being shunned by the villagers and unable to find a home, he wandered into the wilderness. Eventually, he comes across an artifact called The Orb of Dominance and uses it to mind-control those who turned him away. The illiger forms an army made up of all the familiar baddies of Minecraft and marches off with designs of world domination.

You’re a…. person. The player character doesn’t really have a backstory other than they’re some sort of hero, and even that’s just implied. That’s about as far as the plot gets. After the protagonist and antagonist are established in the opening cutscene, the story wipes its hands, lets out a satisfied sigh, and leaves.

I wasn’t expecting a breathtaking story with Minecraft Dungeons, but crafting some sort of lore around the game would have been nice. You’re not given any motivator to keep playing other than the gameplay itself, and it feels a bit aimless without a more substantial anchor to tie the player to the action. 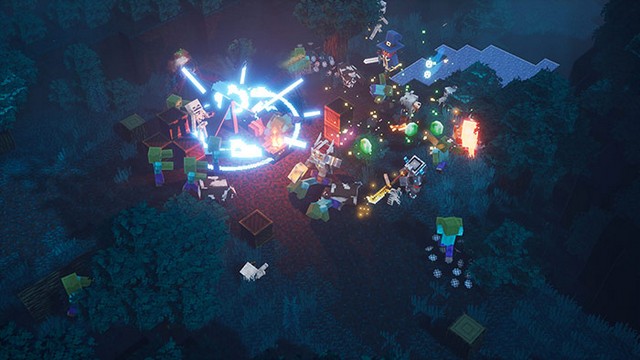 The gameplay in Minecraft Dungeons is reasonably engaging, at least at first. It works as most point-and-click RPGs have since the 1990s, which isn’t a bad thing. Above all, it’s functional and doesn’t take risks that might detract from the primary loop of slaughtering enemies by the dozens and scooping up loot.

Each of the 9 levels (10 if you count the secret one) are procedurally generated so that you won’t get the same dungeon layout each time. However, despite the randomization in layout, most levels play much the same. You fight your way through mobs, take on a miniboss or two, and then face a boss at the end of the level. There is a bit of exploration to be done, and it pays to search through each nook and cranny of the map. Sometimes you’ll find optional mini-dungeons which reward you with better-than-average drops, and some dead-ends contain items you’ll want to grab.

Unfortunately, the level design in Minecraft Dungeons falls into the same trap every game that uses procedural generation does. Because of the lack of handcrafted content, the dungeons all feel somewhat same-ish. Nothing serves to distinguish them besides the setting. So, you’ll fight your way through villages, forests, and caves, the only thing that differs between them is the mobs and the background textures.

It only takes about 5-6 hours to play through the entirety of Minecraft Dungeons on default difficulty. However, you’re encouraged to play the game repeatedly. Once you beat it on Default, you’ll unlock the Adventure difficulty. Finish the game on Adventure, and you’ll be able to play at Apocalypse. Each difficulty level also has six sub-levels you can set before each level. The higher the difficulty, the better the loot drops.

Unfortunately, the loot isn’t very engaging as you can’t grind for a specific piece. The equipment in Minecraft Dungeons is also randomly generated, which makes multiple playthroughs seem pointless. There’s nothing in this game like item sets in Diablo 2 that hooks you into the grind. Mainly, playing Minecraft Dungeons is grinding for grinding’s sake, which is a turn off to me. 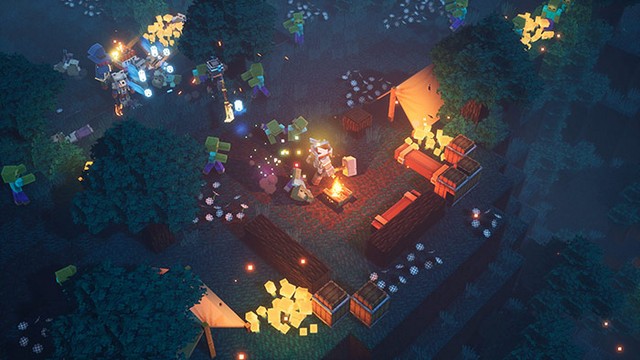 Your character’s abilities in Minecraft Dungeons are entirely determined by what items they have equipped. This is in stark contrast to most action RPGs, which have a player lock their avatar to one or more classes, which affect their growth and abilities. This makes the game very accessible as you don’t have to worry about looting items you can’t use.

Instead of leveling your character up, you’ll gain power by upgrading your weapons, armor, and artifacts via enchantments. Defeat enough enemies, and you’ll get an Enchantment Point that can be used to enhance one of up to three randomly generated abilities on your weapons. You can also refund Enchantment Points and spend them on new items when you find a better weapon, piece of armor, or artifact.

Unfortunately, you’re limited to one armor slot, one long-range weapon slot, one short-range weapon slot, and three artifact slots. This means you can’t get too crazy when it comes to building your character. I think the system would have worked better with a predefined set of items that could drop. With procedurally generated loot, it’s hard to sit down and plan out a build to use because you never know if you’ll ever get a piece of equipment you need.

Despite the limits of the equipment system, you are provided with some fun abilities to use. I never stopped getting a kick out of hitting a mob with a firework arrow and being treated with a massive explosion.

Minecraft Dungeons Review | A waste of an IP 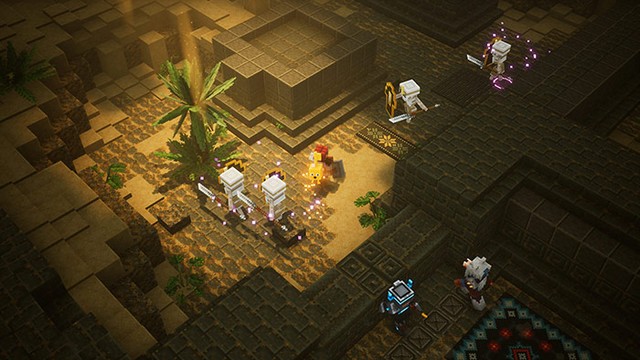 Minecraft Dungeon‘s systems might be simplified, and the level design can be lacking, but its most prominent issue is underutilizing its namesake. There are no unique mechanics here that we haven’t seen before, which seems like a sin given how revolutionary Minecraft was on its first release.

Unfortunately, this game doesn’t make use of Minecraft‘s creative gameplay, instead opting to present a paint-by-numbers hack-and-slash looter. In essence, the “Minecraft” in Minecraft Dungeons is nothing more than a skin atop a fairly generic game. The graphics are charming, and I love the Minecraft setting, which makes it incredibly disappointing that this game wasn’t something more.

The baffling part of these design decisions is that Mojang is the studio behind one of the most successful and profitable games ever made and is owned by one of the largest software companies in the world. Sure, Minecraft Dungeons is only $20, but the idea could be incredible if given more effort and resources. Imagine if this game mixed hack-and-slash gameplay with building and mining. You could set up traps for mobs by digging pits, escape hulking bosses by tunneling, and maybe hand-build a base from which to fight the Arch-Illiger.

Unfortunately, instead, we got a competent action RPG with simple mechanics and an overemphasis on procedural generation. The co-op mode, which allows you to play with up to four players, adds the appeal of mindless fun with friends, but there are better games in the genre that offer the same multiplayer capabilities. In practice, multiplayer feels more like Gauntlet than Diablo, which is excellent for those who want something quick to drop-in and drop-out of. Anyone who wants more depth to their multiplayer RPG experience should look elsewhere to games like Diablo or Path of Exile.

Minecraft Dungeons isn’t a bad game, but it is full of missed opportunities. There are plenty of games that did the point-and-click, hack-and-slash RPG thing a lot better even in the 1990s. Fortunately, the game is priced to sell at only $20 and holds at least 5-6 hours of fun for most players. There is replayability in the multitude of difficulty options, and if you’re looking for a game just to chill and grind in, Minecraft Dungeons is a good pick.

I would have liked to see Mojang put more resources behind Minecraft Dungeons and put a unique spin on the hack-and-slash RPG genre by utilizing Minecraft‘s unique aspects. Minecraft Dungeons is fun in short bursts but does little to actually adapt the Minecraft property into its gameplay. Mojang plans to expand Minecraft Dungeons with DLC that may address some of the issues it has at launch. However, with the gameplay loop being so shallow, I wouldn’t count on any DLC expanding the game’s depth without fundamental alterations to the game’s core systems.

Graphics and design are charmingly Minecraft. First playthrough is a blast. Gameplay doesn't hold up under repetition. Doesn't utilize the…
Friday

Graphics and design are charmingly Minecraft. First playthrough is a blast. Gameplay doesn't hold up under repetition. Doesn't utilize the…
February 10

Graphics and design are charmingly Minecraft. First playthrough is a blast. Gameplay doesn't hold up under repetition. Doesn't utilize the…
February 21

Graphics and design are charmingly Minecraft. First playthrough is a blast. Gameplay doesn't hold up under repetition. Doesn't utilize the…
February 24