“Who lives in a pineapple under the sea?” Honestly, up until reviewing the unfortunately titled SpongeBob SquarePants: Battle for Bikini Bottom Rehydrated, I didn’t really know. Sure, I knew of the trouser-wearing sponge, but after never watching a full episode of the show, I didn’t know much about him. Thankfully, knowledge of SpongeBob, Patrick, Squidward, et al isn’t necessary to enjoy this top-notch remake.

SpongeBob: Rehydrated follows in the footsteps of Crash Bandicoot’s N-Sane Trilogy and Spyro’s Reignited Trilogy by reminding me how boring my adolescence was, providing another beloved early ’00s game I never played with an impressive makeover. But unlike those games, Rehydrated sticks to its predecessor’s playbook, resulting in a modern-looking platformer with a decidedly old-school feel.

Playing a remaster of a game you’re unfamiliar with is one thing, but playing a remaster of a game based on a TV series you’re unfamiliar with is another. I had expected to be left cold by SpongeBob: Rehydrated, but its bright world and lively, funny characters not only made it easy to enjoy without watching the show, but it actively made me go and watch the series after playing. Yes, I would now consider myself a SpongeBob SquareFan. Developer Purple Lamp Studios has completely overhauled the design of the 2003 game, bringing its presentation more in-line with the colorful animated series. This is most notable in its Bikini Bottom hub world and earlier levels, with the likes of Jellyfish Fields and Goo Lagoon brimming with personality. Fishy pedestrians meander the levels; cannons sit atop giant sandcastles raining projectiles down upon you; winding slides wrap around barnacled mountains in the distance. Every level looks like a playground waiting for you to explore it.

And explore you shall. SpongeBob: Rehydrated is a collect-a-thon, meaning that you’ll spend most of your time investigating its nooks and crannies to find hidden items. Chief among these are its Golden Spatulas, the keys to unlocking new levels, which can be uncovered in a variety of ways utilizing the unique abilities of SpongeBob, Patrick, and Sandy.

Collect-a-thons aren’t exactly a dime a dozen like they were back in the early 2000s, and SpongeBob: Rehydrated is a throwback to the genre’s prime. Each level has an overarching main objective, though you’re free to come and go as you please even if you don’t complete it. Similarly, you can access levels in any order you want, provided you have the correct number of Spatulas to unlock them. 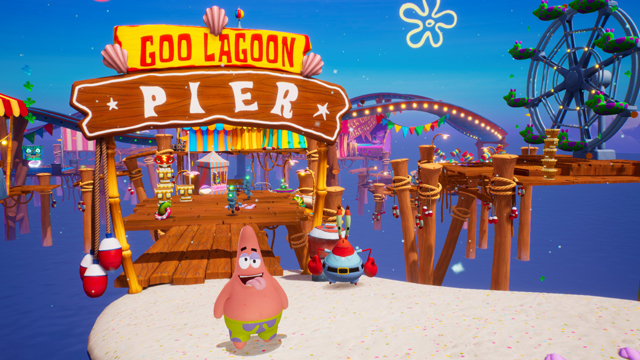 There is a lot to do in each level, and you’ll be transported to a variety of locations in each before you obtain every single Spatula. In Downtown Bikini Bottom you’ll be hopping between roofs destroying robots the one minute, then bungee-jumping from atop the Sea Needle the next. Shiny Objects, another form of collectible, can be used to unlock additional pathways and platforms, opening up each level and giving you more things to do in the process.

SpongeBob: Rehydrated retains that old 3D platformer ethos of throwing the player into an open area and vaguely pointing them in a direction. There’s rarely an end of level boss to signify that you can wrap things up and move on, with you instead encouraged to leave at will then revisit when you want to collect more things. You can also fast travel to the exact area you’ll need to unlock a Golden Spatula after finding its location, eradicating the need to mindlessly wander through levels to find that last collectible. 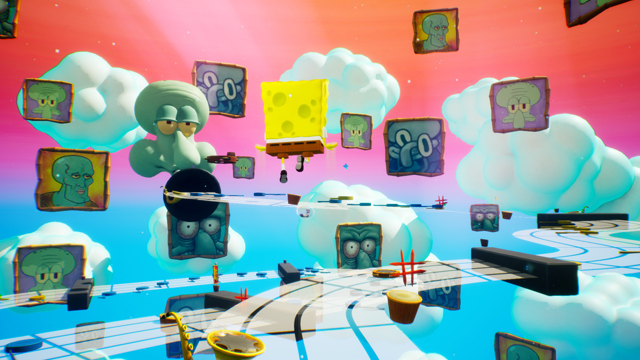 But the process of unlocking each Golden Spatula isn’t exactly easy. Some of SpongeBob: Rehydrated‘s objectives are downright grueling, especially as the game reaches its later stages. Certain puzzles take a punishing amount of time to complete, and are far too vague in outlining to the player exactly what they have to do.

One particular puzzle sees Patrick having to gather three stone Tikis, and I spent an extortionate amount of time scratching my head with no clue what to do. Eventually I completed it, but not in the way that the game wanted me to — I threw one of the Tikis onto a ledge it clearly wasn’t supposed to reach, whereas I was actually supposed to find a button off the beaten path that would’ve allowed me to do so. Couple this frustration with the fact that the stone Tikis reset every time you fall into the deadly Goo below, and it made for far too many expletives being shouted at a child-friendly game. 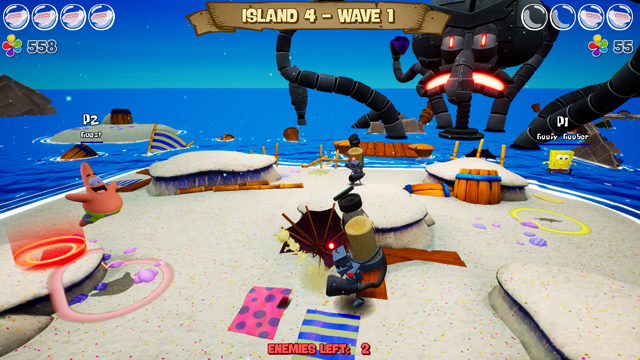 Thankfully, SpongeBob: Rehydrated pulls you back into the action quickly enough for these moments of frustration to be mostly forgettable by the end of the game. Platforming is fluid and responsive, and checkpoints are plentiful with Bus Stops dotted around each level allowing you to neatly switch between characters. It would have been nice for Sandy to receive more spotlight, but the sections she does have are some of the game’s most memorable.

But while it feels like SpongeBob: Rehydrated would’ve benefited from more of Sandy, there is still plenty of game here to enjoy. I leisurely completed it at around 15 hours, stopping to pick up most of the Golden Spatulas and explore the world. There’s also a new multiplayer mode to enjoy, which allows players to fight waves of enemies along with a robot Squidward. Priced at $30 at launch, it offers a lot for the fraction of the cost of a regular retail release.

SpongeBob SquarePants: Battle for Bikini Bottom Rehydrated is a gorgeous remake of a cherished game adaptation. With tons of unlockables spread across levels with tons of variety, it doesn’t rely on its namesake alone to carry it. While SpongeBob fans will undoubtedly be happy to play through a game that retains the show’s sense of humor and colorful animation, its solid platforming and the freedom it provides players with to explore its diverse levels make it one of the better remakes we’ve seen.

Review code provided by publisher. Reviewed on PC via Steam.

A colorful and gorgeous remake. Lots of variety and diverse levels. Collecting made fun and easy! Tons of stuff to…
Today

A colorful and gorgeous remake. Lots of variety and diverse levels. Collecting made fun and easy! Tons of stuff to…
February 3

A colorful and gorgeous remake. Lots of variety and diverse levels. Collecting made fun and easy! Tons of stuff to…
February 10

A colorful and gorgeous remake. Lots of variety and diverse levels. Collecting made fun and easy! Tons of stuff to…
February 21

Guides A colorful and gorgeous remake. Lots of variety and diverse levels. Collecting made fun and easy! Tons of stuff…
8 months ago

Slay the Spire in, Persona 5 out.
News 10 months ago

THQ Nordic Showcase presents SpongeBob but none of its exciting franchises

Are you ready kids?
Originals 1 year ago

Madden 21 is collaborating with SpongeBob for some reason

And it's probably not to sing "Sweet Victory."
News 2 years ago