Risk of Rain 2 review for PS4, Xbox, PC, and Nintendo Switch. The original Risk of Rain was something of a indie hit, offering simple roguelike gameplay in an atmospheric two-dimensional world. But there was something missing; something holding the game back from being the action-packed experience it was yearning to be. To solve the problem, the team at Hopoo Games took its addictive formula and introduced an entirely new dimension. The result is RISK OF RAIN 2, a now-3D roguelike that offers third-person shooting and melee combat in a package that promises a huge variety of possibilities — and delivers in spades. 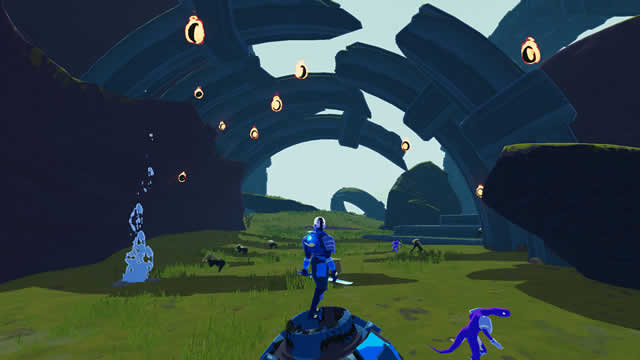 The setup for Risk of Rain 2 is simple: You choose from one of 10 different characters, called Survivors, before being dropped onto the surface of an alien planet. From there, you’ll need to defeat ever-increasing hordes of enemies to earn gold and experience. Experience levels up your character, while gold is used to unlock treasure chests containing loot in the form of randomized items and equipment. These items grant unique abilities, all of which stack in power, while also opening up new combinations or synergies with other abilities or equipment.

The first few matches of Risk of Rain 2 can be unforgiving. Survivors will be slow — even the nimble ones — and they’ll be woefully under-equipped to deal with the never-ending tide of monsters. Likewise, the first dozen or so items you collect won’t provide any dramatic increase to your power. Because the drops are randomized, items will seem like they don’t provide any noticeable impact until stack counts start reaching toward six or more. You’ll learn a few lessons, then you’ll die, and the process will repeat.

However, if you stick with it, patterns will begin to emerge. Making progress through environments and completing challenges will unlock more powerful items, more useful equipment, and better ways to make use of each Survivor’s individual powers. Eventually, you’ll figure out how to unlock Artifacts, which allow you to set specific conditions that apply throughout an entire run. One of these Artifacts, the Artifact of Command, will let you choose which item you receive from any treasure chest. This is when the game’s true foundation begins to reveal itself. 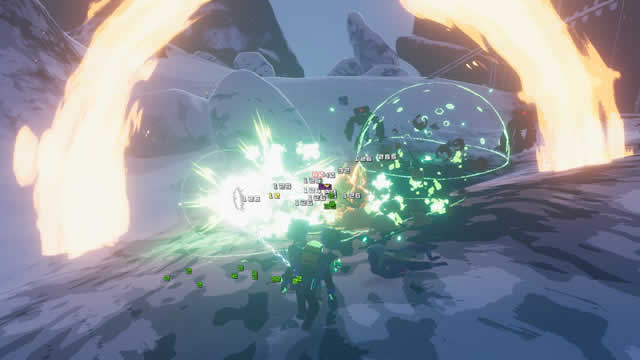 Planning out item stacks is the highlight of Risk of Rain 2. Each of the game’s 120+ items, from low-level Common items to the powerful Rare and Boss items, serves a specific purpose. Some, like the Tougher Times teddy bear or the Lens-Maker’s Glasses, benefit just about any type of build. Others, like the Backup Magazine and Bandolier, are mainly for ability-focused characters. The rest simply provide a way to enhance whatever type of power you want, from crippling status effects to crowd-melting AoE and everything in between.

For example, one of my favorite builds centers around healing. The Engineer can place turrets that inherit your items, but the default turrets can’t move once placed. Fortunately, there’s an item called Bustling Fungus that provides a healing radius while standing still, allowing them a sort of passive defense. This healing ability can then be combined with N’Kuhana’s Opinion, which stores excess healing energy and releases it in the form of enemy-seeking projectiles. It also works well with Aegis, which grants a temporary barrier for any overhealing provided. This combination allows turrets to both survive incoming damage and target multiple creatures at once.

That’s just one example among countless ways to optimize builds. The Huntress gets massive boosts from items that focus on critical hits, like Predatory Instincts. The Mercenary becomes outrageously agile with items like Paul’s Hoof and the Hopoo Feather. The Loader can mitigate most damage by stacking shield-focused items like the Topaz Brooch or Personal Shield Generator. The list goes on and on. Every character has weaknesses that be minimized and strengths that can be maximized, and given enough time, you’ll be able to focus these optimizations to create truly outrageous builds. 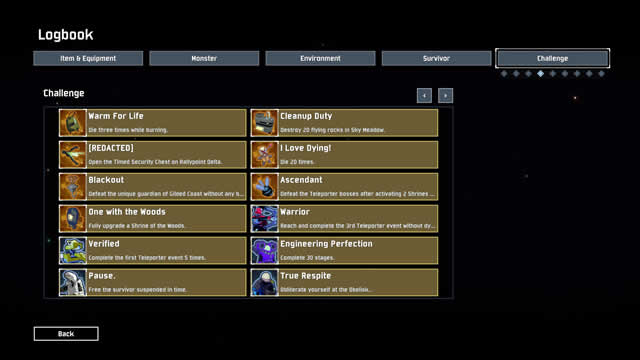 The world of Risk of Rain 2 is designed for curious players. Very little is given direct explanation; instead, you’re meant to figure things out through trial and error. Artifacts, for instance, can only be unlocked once you find a machine and enter a specific code. The codes themselves are hidden across environments, some of which are tucked away within secret levels. Plus, unlocking Artifacts involves completing a trial with the Artifact active, which may or may not be possible with your current build — looking at you, Artifact of Glass.

This philosophy also applies to unlocking items and characters. Most new gear is unlocked by completing challenges, of which there are over 100. Some are easy, like dying five times. Others require seeking out hidden areas or defeating secret bosses. Yet others involve focused strategies, like reaching the fourth stage without ever healing or completing 20 stages in a single run. Tackling these challenges provides an organic way to discover the game’s subtleties and uncover the potential within any specific item or piece of equipment.

It will take a long time to discover everything Risk of Rain 2 has to offer. I’ve logged over 100 hours so far, and there are still several items and challenges left uncovered. And yet, despite all the time I’ve spent in the game, I’m still eager to find what’s missing. Each uncompleted challenge serves as a reminder of a strategy I haven’t yet tried, or of an environment I haven’t yet fully explored. This trend continues with modes such as the Prismatic Trials, which change every day or so, and the Eclipse mode, which is designed specifically for players looking to test their skills. 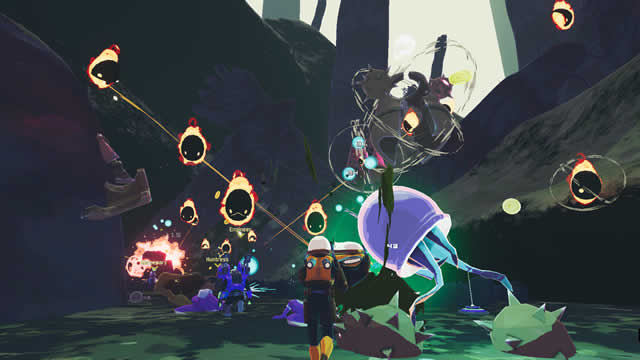 Everything you could hope to achieve in Risk of Rain 2 is possible in single-player mode. However, the team at Hopoo Games has also included the option for online co-op multiplayer in parties of up to four players. Bringing a friend along for the ride is an excellent way to make the game less challenging, especially for those new to the experience.

Unfortunately, multiplayer can be hit-or-miss. Host migration seems to be the main concern — sometimes players just leave the match, ending the round for everyone. There’s also the problem of basic human nature, where some so-called allies are happy to take any and every item in a stage, building immense power while you’re stuck crawling around looking for scraps. As with any online game, the experience is ultimately determined by the quality of the players involved. Thankfully, if you can put together a group of trusted friends, the sky is the limit.

In good company, playing Risk of Rain 2 online is wildly satisfying. Four considerate and determined players can become so powerful that the already difficult gameplay goes from challenging to laughably easy. In those instances, Artifacts come into major play, especially the Artifact of Honor (where enemies only spawn as Elites) and the Artifact of Evolution (which allows monsters to use items). These make it possible to create circumstances where even your most overpowered builds are put to the test, requiring item stacks that are not only suited to your individual character, but to the team as a whole.

As far as I’m concerned, Risk of Rain 2 is as good as gaming gets. Unlocking items, discovering new synergies, planning out builds — it’s all immensely satisfying. Make no mistake: This is a tough game, and the randomized nature inherent to roguelikes just won’t click with some people. But, for players with a taste for escalating action and challenge, this game stands as one of the very best in the genre. Build possibilities are endless, there’s a wide variety of challenges, runs can be tailored toward specific play styles, and you’re always free to bring some friends along for the ride. With a low cost of entry and availability for all major current-generation consoles, there’s simply no reason not to add Risk of Rain 2 to your collection.