Doom Eternal is, at its core, an excellent first-person shooter and one of the best first-person shooters ever made. Switch ports often test a game’s greatness as the weaker hardware can sometimes muddle that quality. The Doom Eternal Switch port is one of those tests and even though Panic Button has gotten such a demanding game to run on Nintendo’s handheld with enough of its soul intact, it’s without a doubt the least good version of the title. 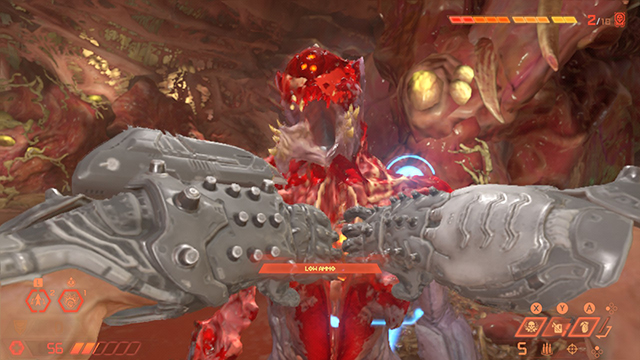 But it’s still a passable version of it. Doom Eternal’s combat is utterly and fundamentally sublime. Rushing from demon to demon while juggling resources and evading fireballs is a blast that rewards aggressive play, quick reflexes, and thoughtful planning. An expansive bestiary of unique demons and a suite of mobility options keep that satisfying loop even more engaging because of how it constantly refreshes itself and tests the player in new ways.

These qualities are still present on the Switch. Ripping and tearing through Hell’s forces can be thrilling as the electronic metal thumps and encourages even more ripping and tearing. Even in its watered down state, this is still one of the greatest shooters on the platform. 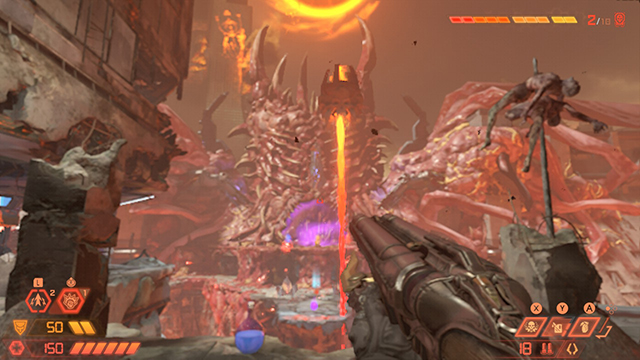 But that lower bar is still lower and brings into question the overall purpose of this port. The frame rate can chug ever so slightly during cutscenes yet it is stable enough during gameplay where it counts (which is still impressive). However, it still caps at around 30 frames per second; around half of the other versions. This drop is immediately noticeable as it feels less responsive in comparison. Responsiveness is the big reason why Doom feels so good to play and diminishing that sublime fluidity is a little devastating.

The controls themselves are also inferior. The analog sticks on the Switch Lite and Joy-Cons are not as precise and do not have a wide range of motion. Trickier shots are harder to nail and that added obstacle takes away from the bliss of slicing through demon hordes as more bullets inevitably miss their target.

Mouse and keyboard may be the optimal way to play Doom, but the DualShock and Xbox controllers were perfectly serviceable. The Switch is just another step below those other console pads and hits a level where it begins to negatively affect the experience. The nifty gyroscopic aiming makes up some lost ground, but doesn’t make up for all of it.

Its visuals have taken a bit of a hit, too, but it doesn’t diminish the experience as much. As is the case with many Switch ports of big console games, Doom Eternal looks a little muddy and some details in the distance can be hard to make out. While this can make landing precise shots even more difficult, the game looks relatively solid overall despite the massive cuts that had to be made. It’s still unmistakably Doom Eternal and that’s mainly due to the red and orange-drenched hellish art style. Panic Button did a commendable job shrinking the game’s visuals down to the platform but it’s also due to id for having a style that translates well to other hardware. 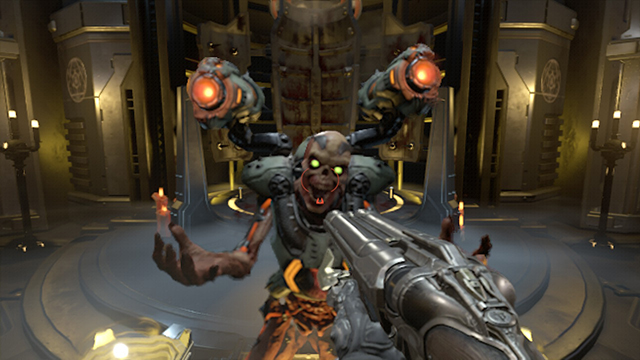 Load times are similar to the PS4 and Xbox One and the game is technically stable, but despite how well Panic Button put such a beefy game on a handheld, it still can’t compete with all of the other versions. It even costs the same price and doesn’t even come bundled with the DLC, despite coming out nine months later. Portability is the only real selling point as it looks, performs, and controls remarkably worse than the PS4, Xbox One, and PC iterations of the title. It comes with a long list of caveats — a list that’s only going to grow longer when the PS5 and Xbox Series X ports come out.

Getting Doom on a new platform is inherent to the series’ DNA as people find more oddball hardware to run the classic game on. Playing Doom on a pregnancy test is not the most optimal way to play it, but it is possible. And Doom Eternal on the Switch is similarly possible but not optimal. The Switch port is still thrilling and has an addictive combat loop with incredible pacing yet it’s inherently held back enough by the platform’s weaknesses to make it the least appealing version. It’s a novelty to rip and tear on the go, but it’s questionable how, well, novel that novelty really is. It runs Doom… sorta.