EPOS B20 Microphone Review: ‘Subtle style puts it above the competition’

The EPOS B20 microphone aims to offer studio broadcast-level quality audio in a super-stylish package. While other companies have gone down the route of incorporating RGB and other gamer flair into their mics, EPOS has adopted a more refined approach, with a clean and minimal design that will look the part in many office and gaming setups. This is the GameRevolution EPOS B20 review. 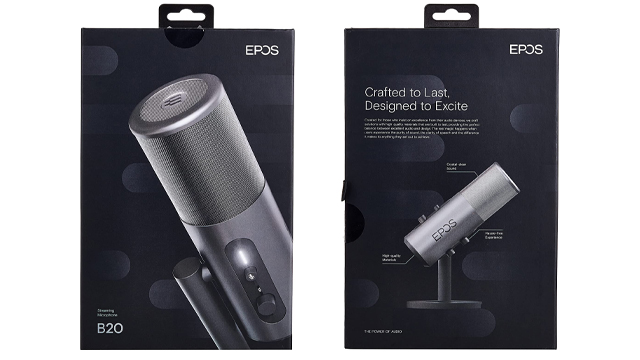 Right off the bat, the EPOS B20 comes in swinging with the best USB microphone packaging I’ve ever seen. It screams quality from the get-go, with a magnetic clasp keeping the box closed and high-quality foam protecting the microphone within. The box includes the EPOS B20 mic, obviously, but also a simple stand, a 2.9m USB-C cable, and documentation.

Buy the EPOS B20 Microphone on Amazon.com

Setup is effortless, with the base of the stand screwing into the attached arm with a single easy-to-grip bolt. Then it’s just a case of plugging in the USB-C cable and installing the optional EPOS Gaming Suite software. 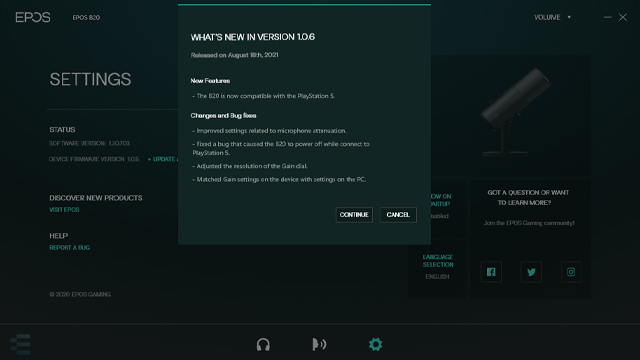 While the app is optional, I would recommend downloading the EPOS Gaming Suite for additional customization of the mic sound. There’s a voice enhancer (EQ), noise gate, noise cancellation, and high pass filter which can be used together for a noticeable improvement. What’s more, the app is how EPOS rolls out new updates. I actually had one waiting for me when I first booted it up, which rolled out a few fixes to the mic, including the ability to work properly with the PS5.

Upon first listen, after the gain had been successfully tamed, I was pleased with what I heard. The condenser sound has an accuracy that my daily driver dynamics don’t match. However, it quickly became clear that the mic would pick up all reverberations from the desk. For serious use where audio quality really matters, users will want to get a third-party boom arm. While the included stand is adequate, and I appreciate the cutout on the base to make make the cable trail tidy, it doesn’t do the sound any favors. The EPOS B20 is a reminder that condenser microphones hear everything, for better and worse. 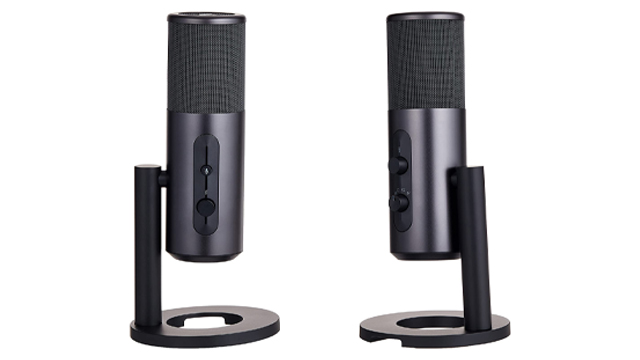 When moving the EPOS B20 from the included stand to my boom arm, the low weight of the product became more apparent. It really is a light microphone. The sleek and stylish metallic exterior is disarming and made me expect a good bit of heft. However, that is not the case. While this is a good thing for boom arm setup, as the mic’s low weight makes it compatible with almost all arms, it doesn’t feel as high-quality as competitors in the same space.

To adjust the mic outside of the included software, there are several knobs and a button for muting. These all feel solid and work well, however there’s no clear feedback for the turning increments, nor is there any indication of when the settings have reached their minimums and maximums. The knobs just spin endlessly. What’s more, as they are seemingly tied to software, it doesn’t seem possible to tune the volume and gain settings when the mic is unplugged. This made for a pretty shocking loud noise when I first plugged the mic in, having thought I’d dropped everything down to 0.

When it comes to specs, the big highlight for me is 24-bit. The EPOS B20’s support for 24-bit recordings is huge for content creators. It provides significant headroom that lets you record at a lower gain and then boost the levels later with no negative impact on quality. This helps avoid clipping issues and other irreversible problems that can ruin a recording.

The audio test above demonstrates the out-of-the-box sound of the EPOS B20. The mic’s recording level is automatically set to 100 inside of Windows, which forces you to severely reduce the gain on the mic. The above example was recorded at 15% gain to avoid clipping. Even then, the mic clips early into the test, so users will want to carefully monitor their overall loudness when speaking or shouting near the mic. Thankfully, 24-bit support permits lowering the recording level and then boosting it later without issue.

To get the best sound, users will want to make use of the various tools inside of the EPOS Gaming Suite. Using the EQ to scoop the mids and boost the treble should help clear up the muddiness. What’s more, the high pass filter should be enabled.

Of course, when plugging this microphone into a console like the PS5 or Xbox Series X, the EPOS Gaming Suite software isn’t available. This limits the sound customization in those applications. The EPOS B20 works best on a desktop PC or laptop, though pairing with a console will still give better mic audio than most headsets. 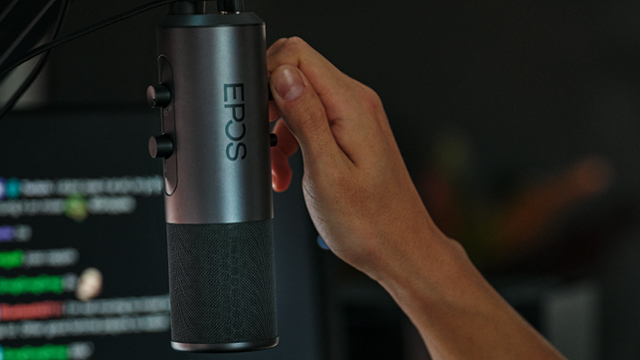 At $199.99, the EPOS B20 is priced at the higher end. While it outputs solid sound that can absolutely be used for livestreaming, recording for YouTube, and other applications, competitors like the HyperX QuadCast immediately come to mind as tough benchmarks to go up against.  With that said, the unique style of the EPOS B20 may sway those looking to avoid the gamer aesthetic, as it really is a great-looking microphone that will fit in any setup.

The EPOS B20 has a subtle style that puts it above the competition. When plugged in, the benefits of condenser sound combine with better-than-most software to provide professional-level quality. Just get yourself a boom arm to make it truly shine!

EPOS B20 Microphone review unit was provided by EPOS.

The condenser.
Tech 1 month ago
8

Enter the world of XLR.
Tech 1 month ago
8

Meet in the middle.
Tech 3 months ago