Last week’s episode showed Boba and Fennec Shand gearing up for a war against the Pyke Syndicate, with Din clearly being in their sights. But while I expected Mando to show up in this week’s episode, I didn’t quite anticipate him being the full focus here. Even if viewers haven’t been paying much attention to The Book of Boba Fett, there’s little connective tissue between the two shows here, making this a very strange — if undeniably fun — episode.

For those left wondering what would happen to Din in his post-Grogu world, the answer is that he’s back to bounty hunting, though with his former companion still at the forefront of his mind. Mando’s struggles with his identity persist, as he is forced to reconcile with his continued pursuit of belonging to a tribe, and having now repeatedly taken off his helmet and therefore becoming an unwilling apostate.

The Mandalorian returns in The Book of Boba Fett episode 5 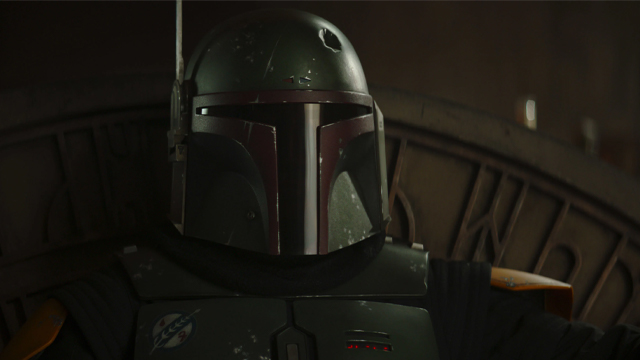 Din’s continued sacrifice of his religious beliefs in order to comply with the world around him is best exemplified in an on-the-nose spaceport scene, where he’s forced to remove weaponry — which Mandalores carry at all times as part of their religious beliefs — in order to join the flight.

Disney-era Star Wars has been at its best when it’s pitted the old vs. the new — “Let the past die. Kill it, if you have to” — and focused on characters facing the complexities of their belief system. The Book of Boba Fett has thus far attempted to do this, though as Fett has developed into an altruist with alarming swiftness, he hasn’t been a compelling character. The focus on Din in episode 5 highlights this even further, with him continuing to be a much more interesting bounty hunter and highlighting why The Book of Boba Fett has struggled to get off the ground when compared with The Mandalorian.

It also highlights the inherent problem with Disney Plus original series in general. Much like its conveyor belt of Marvel shows, which are impenetrable for Marvel newcomers or those not keeping up with the litany of films and series that are being shoveled out, The Book of Boba Fett episode 5 is a difficult watch if you didn’t keep up with The Mandalorian. There’s an expectation from Disney that if you want to watch one of its shows, you’ll have probably watched all of its shows, but this ultimately harms their longevity. If The Book of Boba Fett is ultimately used to set up The Mandalorian season 3, which it now seems like is going to be the case, what would be the value of ever rewatching it?

The Book of Boba Fett Episode 5 Review: The final verdict

Still, this is weirdly the best episode of The Book of Boba Fett yet, despite it not being much of a Book of Boba Fett episode at all. I’m not sure if reminding us of how better The Mandalorian is will prove to be a great strategy for the series, but at least a character with personality has finally been thrown into the mixer.

The Book of Boba Fett

Every Star Wars Movie and TV Series Release Date in 2023

Here are the stories you can expect from the Star Wars universe in 2023.
Originals 2 months ago

That's one way to deal with conflict.
News 4 months ago

Get your first look at The Mandalorian season 3.
News 5 months ago
9