At an after-hours GDC event promoting Battlefield 3’s three new expansion packs, DICE’s General Manager Carl Magnus Troedsson and Executive Producer Patrick Bach spoke enthusiastically about Battlefield 3: Close Quarters, their infantry-only expansion. They mentioned that players had already had a taste of the kinds of maps it offered with Operation Metro, and talked about its new weapons and vertical gameplay. Then they let us play it.

We got to play a PC build of Deathmatch on the Ziba Tower map, comprised of the top three floors of a high-rise building, with a restaurant, wading pool, and other very posh-looking amenities that were soon laid to waste by bullets, shotgun blasts, and grenades. Short-range weapons ruled in the tight quarters and heavily cornered spaces with knife kills and shotguns seeming to be the weapons of choice.

Troedsson and Bach weren’t kidding about the vertical gameplay, either. From a walkway above the open air restaurant covered by tarps, a player could shoot two stories down at anyone attempting to cross between one side of the map to the other (at least until someone seanks up behind them and stabs them in the chest). Going up or down, there are advantages to both.

At one point a group of team members were caught at a choke point on a walkway on the second level. On the other side of the walkway, the enemy would take turns moving in and out through a door to fire on my exposed teammates. Jumping the rail, I ran below, out of the range of fire and lobbed a grenade up into the doorway above, smoking out the enemy and forcing them to expose themselves to the my comrades’ fire. 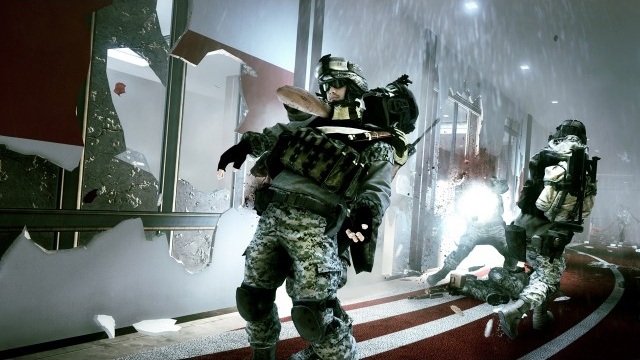 Gameplay was fast and furious, and it seemed like the map was designed to keep everyone moving constantly to avoid the surprise of leaden death. Out of curiosity, I jumped over the outside rail to see if I would die from impact with the ground, but found that I was respawned for being out of the map area before I hit; that’s one tall tower. I also shot everything I could to see how satisfyingly it would break. The giant hanging bulb lights get a 10/10, exploding in a flash of sparks with a crash. I’d say I got as much satisfaction from shooting them as I did from shooting an enemy in the face.

If Ziba Tower is an indication of the whole Battlefield 3: Close Quarters expansion, then it will have frenetic action in tight spaces and vertical play opportunities. Close Quarters is set to release in June, and one week earlier for PS3.

Battlefield 2042 Season 2 will be arriving next month with plenty of new content like a specialist and map. In…
News 5 months ago