The Hitman 2 2.21 update is here for Xbox One, PlayStation 4, and PC! The April update for Hitman 2 is bringing with it major updates to Ghost Mode, Silent Assassin changes, and a whole lot of quality of life fixes requested by the community. The Hitman 2 2.21 update went live this morning around 7 am ET on all platforms and will be around a 1.7 GB  download on consoles and 1.1 GB on PC. Below, you kind find highlights from the Hitman 2 2.21 update as well as a complete list of official patch notes. 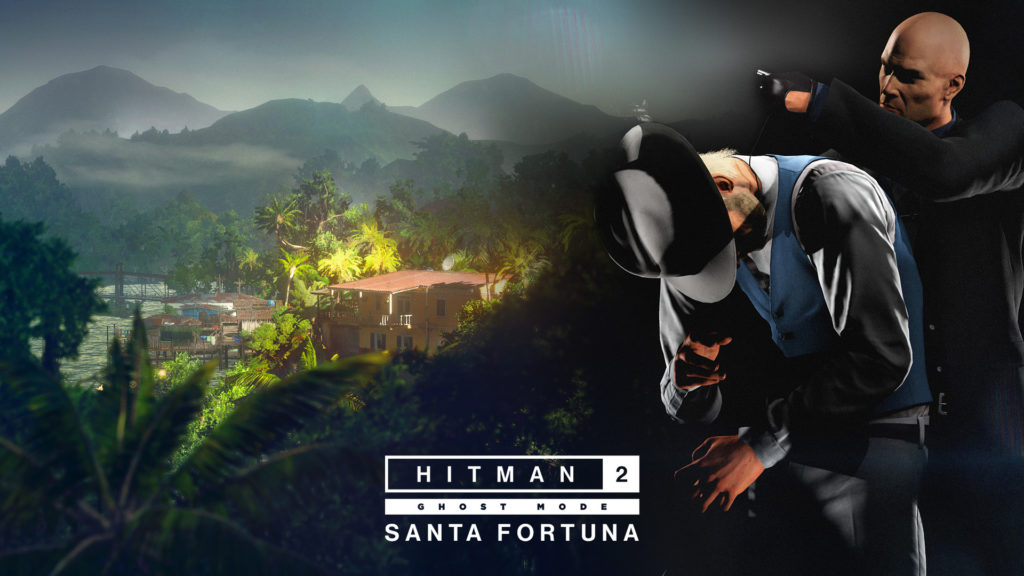 The Hitman 2 2.21 update is showing a lot of love to Ghost Mode with a new location, emotes, items, challenges, and a whole lot more. For starters, the new Ghost Mode location is in the jungle of Santa Fortuna. There are also four new emotes that can be activated in Ghost Mode: How Gracious, Well Done, Evil Eye, and Disbelief.

Additionally, there are four new items that can be found in Ghost Crates. The Ghost Freeze Grenade which slows down enemies, the Ghost Outfit Manipulator which changes both you and your opponents outfit randomly, the Ghost Proximity Explosive which will explode anyone who gets too close, and the Ghost Flash Grenade which will disorient your enemy.

There is also a new Phantom Assassin Challenge in Ghost Mode, which can be completed by killing 100 targets in Ghost Mode and will unlock the Phantom Suit. Lastly, four new target variations are being added (for a total of five) which will cause the targets to vary in their appearance. 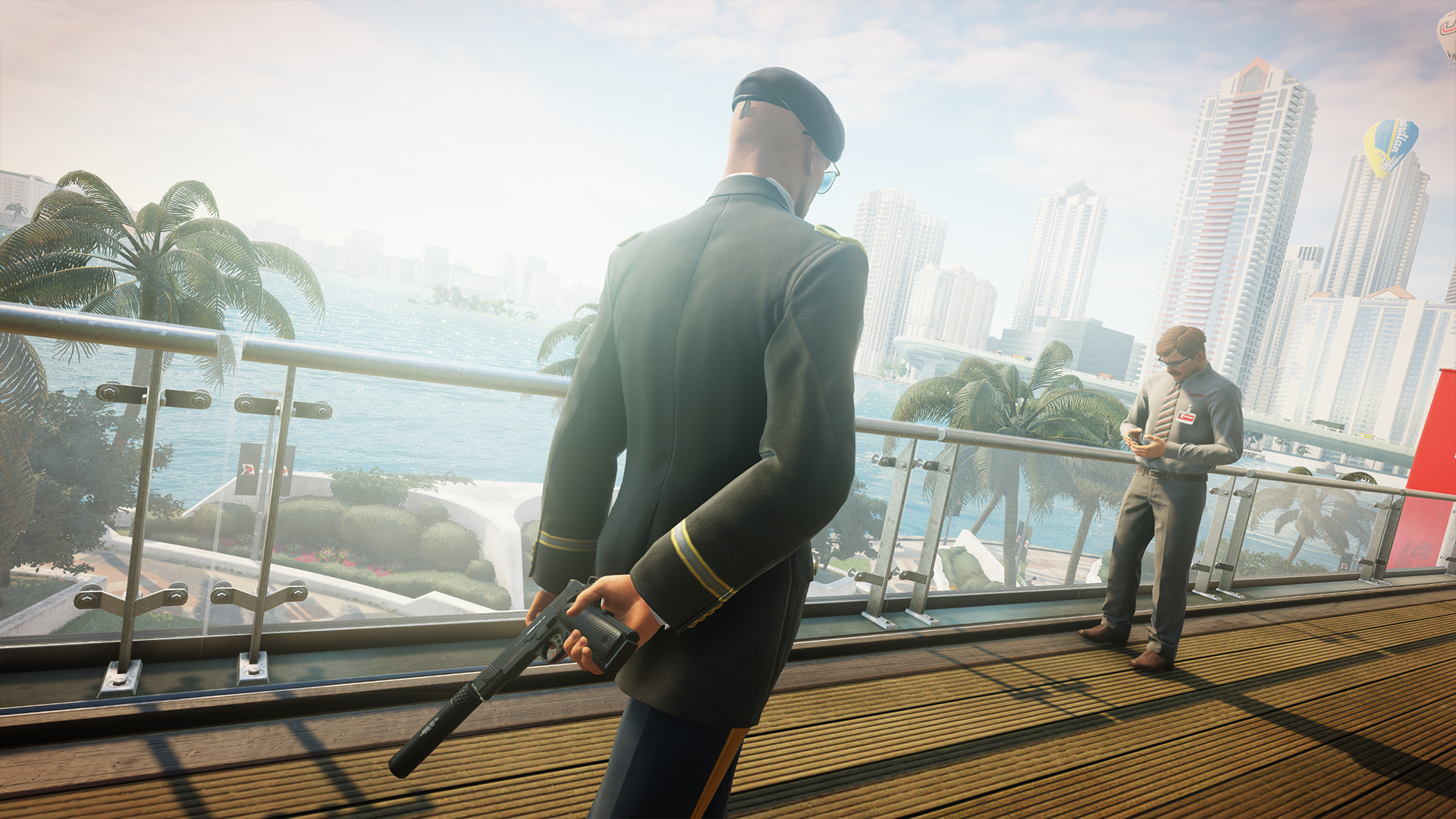 There are two major changes to Silent Assassin: Scoring and tracking. The Silent Assassin tracking update will now allow players to check their score in-game via an on-screen icon. The icon will be located next to the minimap and the color will reveal if the player is currently being rewarded. If something happens that causes Agent 47 to temporarily not be rewarded (like being spotted on a camera) the tracker will turn red, but will then turn green again once the issue is taken care of (i.e the video being deleted).

To earn a Silent Assassin rating in any mission, players will have to complete the mission without anything in the list below occurring during their playthrough.

Our second location for Ghost Mode is Santa Fortuna. Welcome to the jungle.

We’ve added 4 new emotes that can be activated in Ghost Mode:

We’ve added 4 new items to Ghost Mode. Pick them up in Ghost Crates.

We’ve added the ‘Phantom Assassin’ Challenge to Ghost Mode. Complete it by eliminating 100 targets in Ghost Mode (any location) and unlock the Phantom Suit.

We’ve added 4 new variations of the Ghost Mode target, for a total of 5. Whilst keeping the same visual style, the targets will now have more variation in their appearance. It doesn’t matter what they look like if you want to unlock the Phantom Suit though, just eliminate 100.

We’ve added the option to immediately go into a rematch with the same opponent.

We’ve implemented new and finalised rules for earning the Silent Assassin rating. Our goals for this rating is to keep it as the pinnacle accomplishment for the game, where earning 5 stars and the highest possible score was something to aspire to and difficult to achieve.

To earn the Silent Assassin rating in any mission, players will need to complete all objectives and exit the mission, without any of the following 7 events occurring:

1. An NPC escalates to the Compromised state.
2. An NPC escalates to the Suspicious state.
3. An NPC catches Agent 47 trespassing.
4. An NPC finds a dead or pacified body. (Accident kills and poision kills do not fail this event)
5. Agent 47 is spotted performing an illegal or suspicious action through a camera by an NPC. (If there is no guard watching the camera feed, 47 will get recorded but can still earn the SA rating by destroying the evidence.)
6. Getting recorded by a security camera and failing to destroy the evidence.
7. Agent 47 kills a non-target.

Additional: For events 1-5, if the NPC that triggers the event is a target (and no other non-targets trigger the same event or gains knowledge from the target), the SA rating will be retained on mission end.

Keep track of your status towards the Silent Assassin rating during gameplay. The tracker will display as an icon next to the mini map and the colour will show whether SA will currently be awarded for the playthrough. In cases where SA is not currently achievable but could be later on, for example if Agent 47 was recorded by a security camera, the tracker will display as red and then turn to green once the evidence has been deleted.

We’ve fixed an issue that could prevent the Silent Assassin rating from being awarded to players who exit a mission immediately after killing the final target.

We’ve changed our ON/OFF menu option selector to be a toggle instead. You’ll still see the old system for some HDR options but we’ll update those in a coming update.

We’ve removed the target names from displaying on the mini map to make it easier to read, especially when multiple targets are close together.

We’ve added categories to the Career Inventory page to make it easier to scroll through your items. This works in the same way as the recent update to the loadout menu.

We’ve added categories to the Career Statistics page to split HITMAN and HITMAN 2. This will allow players to get to the preferred destination quicker and have a per-game overview of their progress.

We’ve made a minor visual change to how the leaderboard scores are displayed, so that the numerical scores are all aligned. This will make them easier to read and compare at a glance.

We’ve adjusted the images of the Featured Contract Challenges to better represent the award that is unlocked for completing them.

We’ve fixed an issue where the ‘Subsonic’ perk on the Sieger 300 Ghost Sniper Rifle was alerting nearby NPC’s.

We’ve fixed an issue in Santa Fortuna where NPCs could see bodies on the balcony when entering Andrea’s mansion through the front door.

We’ve fixed an issue that could cause the car battery to be non-functional and only ‘active’ immediately after being shot, rather than remaining active until it killed someone.

We’ve fixed an issue where Agent 47 would not be removed from a blending spot after NPCs become suspicious of him. This could lead to 47 reading a newspaper whilst guards peppered him endlessly with bullets. Whilst it made for some nice Reddit posts, we still wanted to fix it.

We’ve fixed an issue in Whittleton Creek where pigeons that had previously been killed, would respawn when loading the game. Now, the pigeons will stay dead.

We’ve changed the images for each store item to better illustrate what’s included. We’ve also changed where the PS4 ‘get access’ links lead to make it easier to make a purchase choice.

We’ve fixed an issue that could cause various issues when exploding a concussion device near the destructible wall between the beach and the lab in Sapienza.

We’ve fixed an issue that could cause 47 to hold his briefcase in an unusual way when using the Pile-Driver Barge Starting Location in Paris.

We’ve made some back-end changes and simplified the unlock requirements for this challenge.

We’ve fixed a number of one-time or frequent crashes across multiple situations and circumstances.

We’ve updated the icon that is used for the Ghost Item Crate to make it easier to differentiate from the Weapons Crate.

We’ve added a ‘Ghost Effect™’ to the Ghost items in the inventory to make it easier to see them at a glance and tell them apart from similar items.

We’ve added a ‘Ghost Item’ label to all Ghost items in the inventory to make it even easier to see them at a glance and tell them apart from similar items.

We’ve moved the Ghost Mode challenges to their own category, and out of Miami. You’re welcome, completionists.

We’ve added new loading tips that include the new emotes and Ghost Items.

We’ve added the Fibre Wire and Lethal Syringe into the Ghost Crate options for Miami and Santa Fortuna to fix an issue that was preventing the ‘Piano Man’ and ‘Tasteless, traceless’ challenges from being completed in Ghost Mode.

We’ve fixed a typographic error in the Ghost Mode Rules where we mistakenly wrote ‘loose’ instead of ‘lose’. Thanks to the hundreds of players that have told us about this error, we won’t make it again.

We’ve added new sound effects to the Ghost Mode results screen, depending on whether you win or loose.

We’ve fixed an issue that could cause Agent 47 to be blocked/stuck when respawning in Ghost Mode.

We’ve fixed an issue that could cause a black outline to form around specular highlights on water surfaces when the ‘Dynamic Sharpening’ option was set to anything other than ‘OFF’.

We’ve fixed an issue where the Texture Filtering settings were not working in DX12.

We’ve listed some of the game’s known issues below, so that you know we’re aware. We’ve always got eyes on the Technical Support and Bug Report threads on the Forums and Reddit too, so if you’ve reported something there, we almost definitely know about it.

We are aware that PC players are still experiencing issues with “0x8000000_” (and related) crashes. We’re continuing to work on a permanent solution to this with our friends and partners at Nvidia. We recommend that players who have been experiencing this issue use DX12, as this has been reported to fix the issue.

We are aware of an issue in the Hantu Port Sniper Assassin map where players can get stuck in the level if the immediately skip the outro cinematic.

We are aware of an issue that can prevent the target icons being displayed on the minimap, based on selected HUD settings.

We are aware of two separate issues in Mumbai where NPC’s can see 47 through walls in the trainyard and the bathroom near Rangan’s office.

Hogwarts Legacy Multiplayer: Are There Online Duels or Co-op With Friends?

It's LeviOsa, not LeviosA.
Games 6 months ago