Rage 2 is out now, and it boasts a huge open-world filled with excitement, adventure, and really wild things. But that’s enough for some players, who are desperate to seek out every hidden secret there is, not to mention every wink and nod to popular franchises. Fortunately the game’s developers are only too happy to oblige, and they’ve packed Rage 2 full of them. To that end, we’ve put together a list of all the Rage 2 Easter eggs we could track down.

We’ve searched the internet and scoured the game for every reference and secret we could find, and we’ve got a nice long list for you below. You’ll find Rage 2 making reference to id Software’s studio head, other id Software franchises Doom and Quake, popular Nintendo franchises such as Pokemon and Legend of Zelda, cheeky nods to WWE Wrestlers, and of course, the original Rage. Let’s have a look. 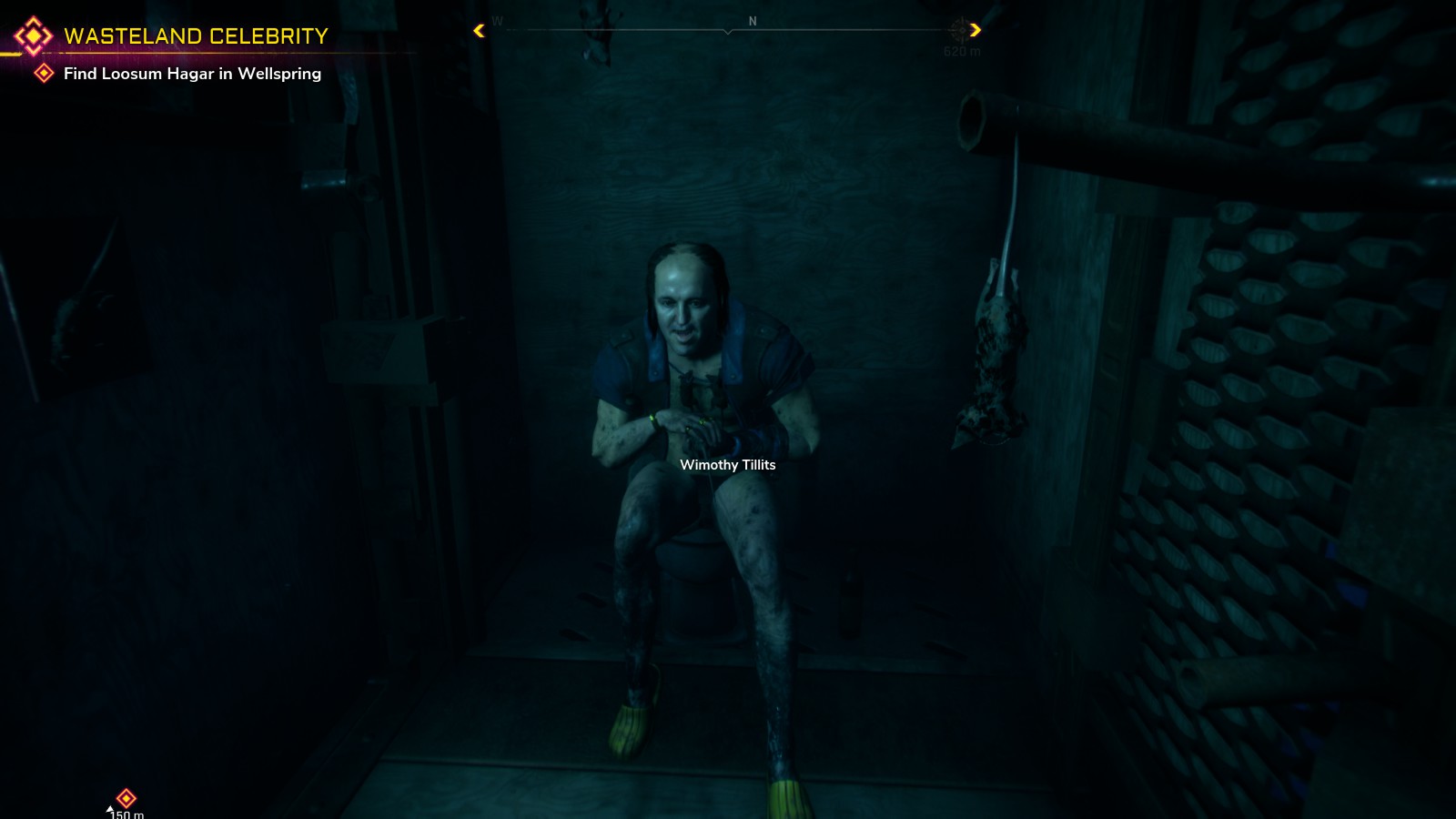 Tim Willits is the studio head of id Software, and the longest-serving member of the id team, having joined the company in 1995 to work on the expansion pack for the original Doom. He’s worked on every game id has made since, including games id has partnered with other studios to make, such as Quake 4 (with Raven Software) and of course Rage 2 (with Avalanche Studios). He was also the creative director of the first Rage, so he’s quite an important part of the series… which explains why he has not one, but two Easter eggs in Rage 2 connected with him.

The first is the fellow above in Wellspring, and we’d say it’s not very flattering, except we’re completely sure Tim was fine with it before it was put into the game. As you enter Wellspring, head right immediately, and you’ll find a couple of open-door toilet facilities. Squatting on one of these toilets, mostly naked, covered in filth, giggling stupidly to himself, and surrounding by hanging rats is this man called “Wimothy Tillits.” Charming. 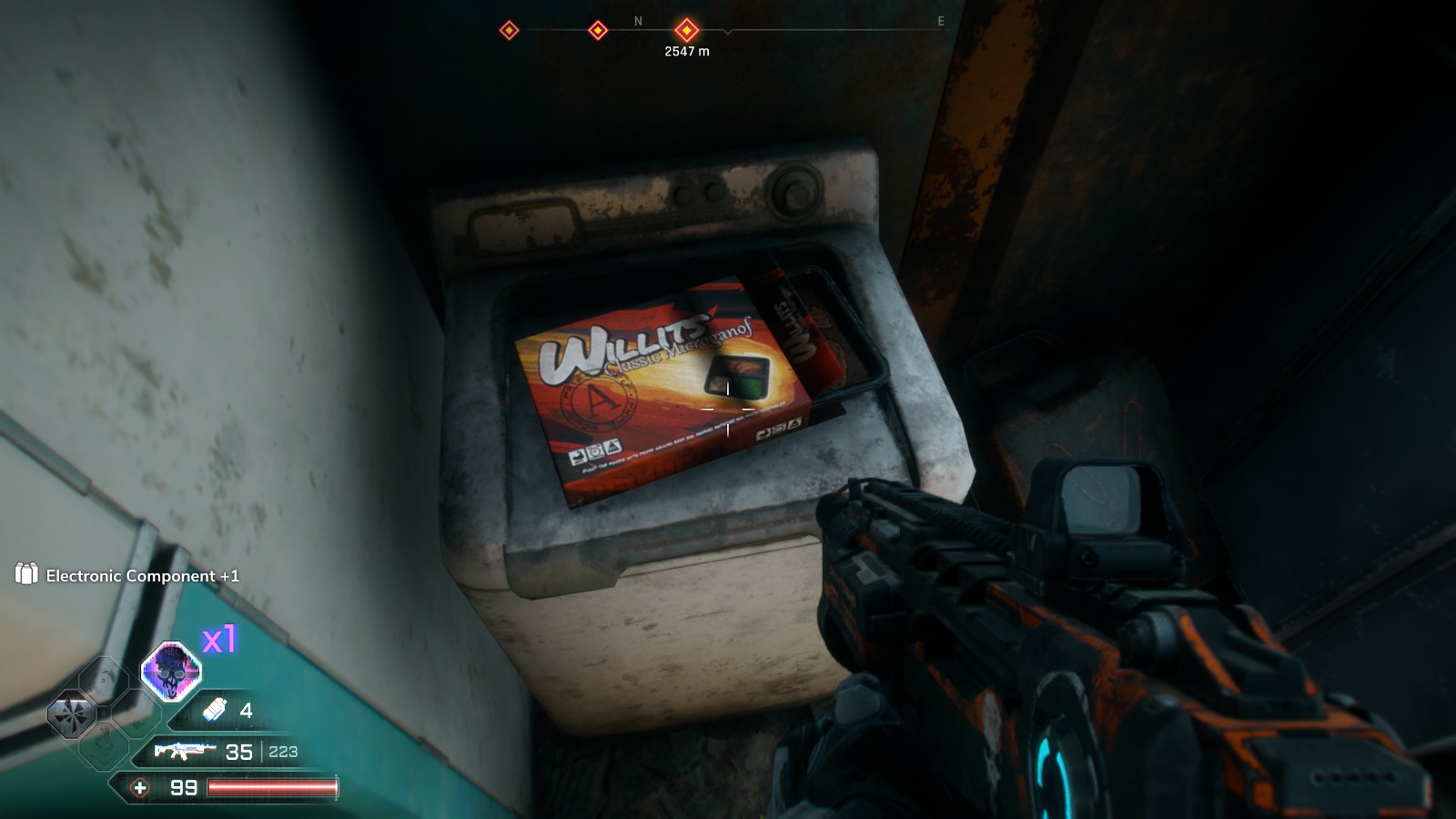 Fortunately for id’s studio head, that’s not his only enduring legacy within Rage 2. He’s also got a line of TV dinners too, which players can find scattered about the wasteland. The “Willits” dinner certainly looks… delicious, we guess? Also note that the dinner is falling to Earth like a meteor, just like the one that decimated the planet. Tim Willits caused all the problems in the world of Rage? Sounds about right. 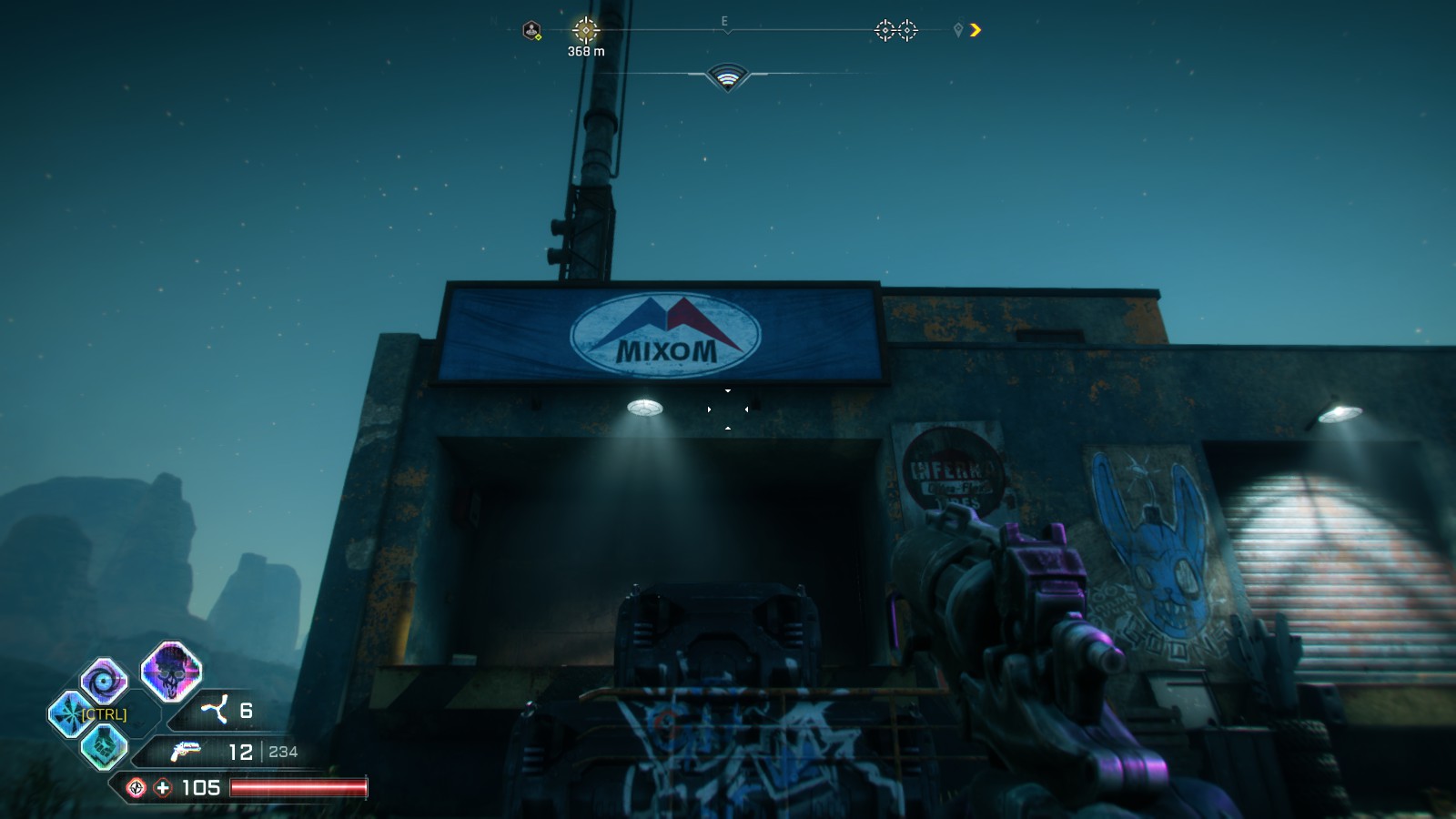 This is essentially a Doom reference, but this fictional company has popped up in several id Software games, so we’re counting it as separate. Mixom is a supply of gas, tools, and, er, chainsaws in the worlds of id Software. They first appeared in Doom 3, and went on to appear in Rage and the latest Doom, where it was suggested they were part of Fallout‘s Vault-Tec company. Rage, incidentally, had numerous references to fellow post-apocalyptic game series Fallout, because it was the first game of id Software’s to be released under its new publisher Bethesda (who own Fallout). We haven’t found any Fallout nods in Rage 2 as of yet, so the appearance Mixom all over the game will have to suffice for now. 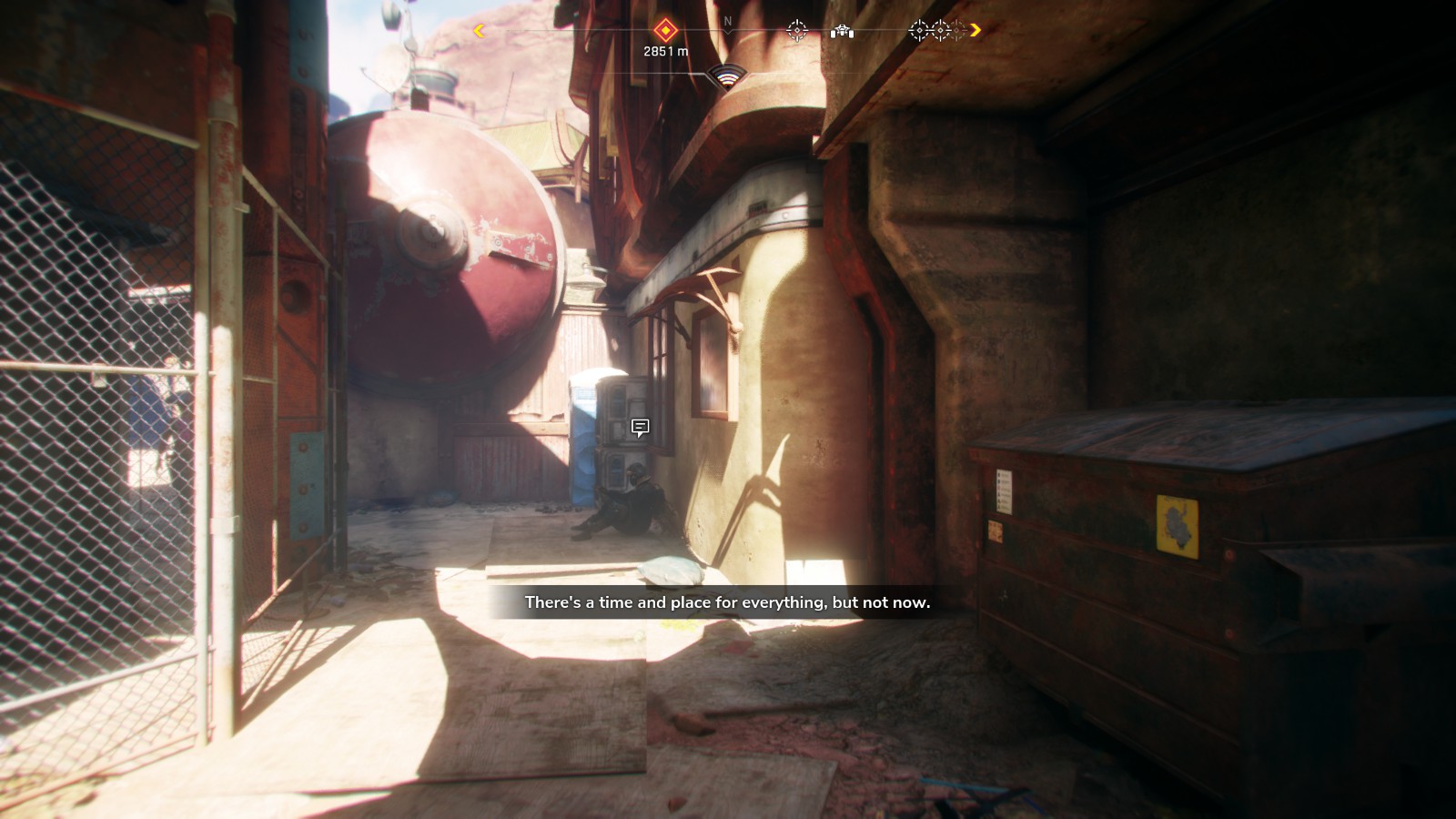 The Pokemon Easter egg in Rage 2 is a sneaky one, and if you’re not a fan of the franchise, you may have stumbled upon it while exploring and thought it was just a random, bizarre error message. In order to find it, you’ll first need to have unlocked the Icarus flying vehicle. You can do that by first meeting with Dr Kvasir in the Sekreto Wetlands, completing his quest at the Eden Space Center, and then leveling up your Project reputation with him (by completing Ark and Ranger-related locations) to level 7. Once that’s done, head to either Vineland or any of the game’s towns, call in the Icarus on the Vehicles tab, and then fly over the town. You should warp to the ground and get the error message above.

Anyone familiar with Pokemon, or at least Pokemon memes, will recognize the immortal and baffling words of Professor Oak. In the early games in the series, if you tried to ride a bicycle inside a building, you would be instantly pulled off the bike and psychically receive the warning, “Oak’s words echoed… There’s a time and place for everything, but not now.” It’s rather cool that Rage 2 would reference this for such a similar moment, albeit with a flying bike instead. 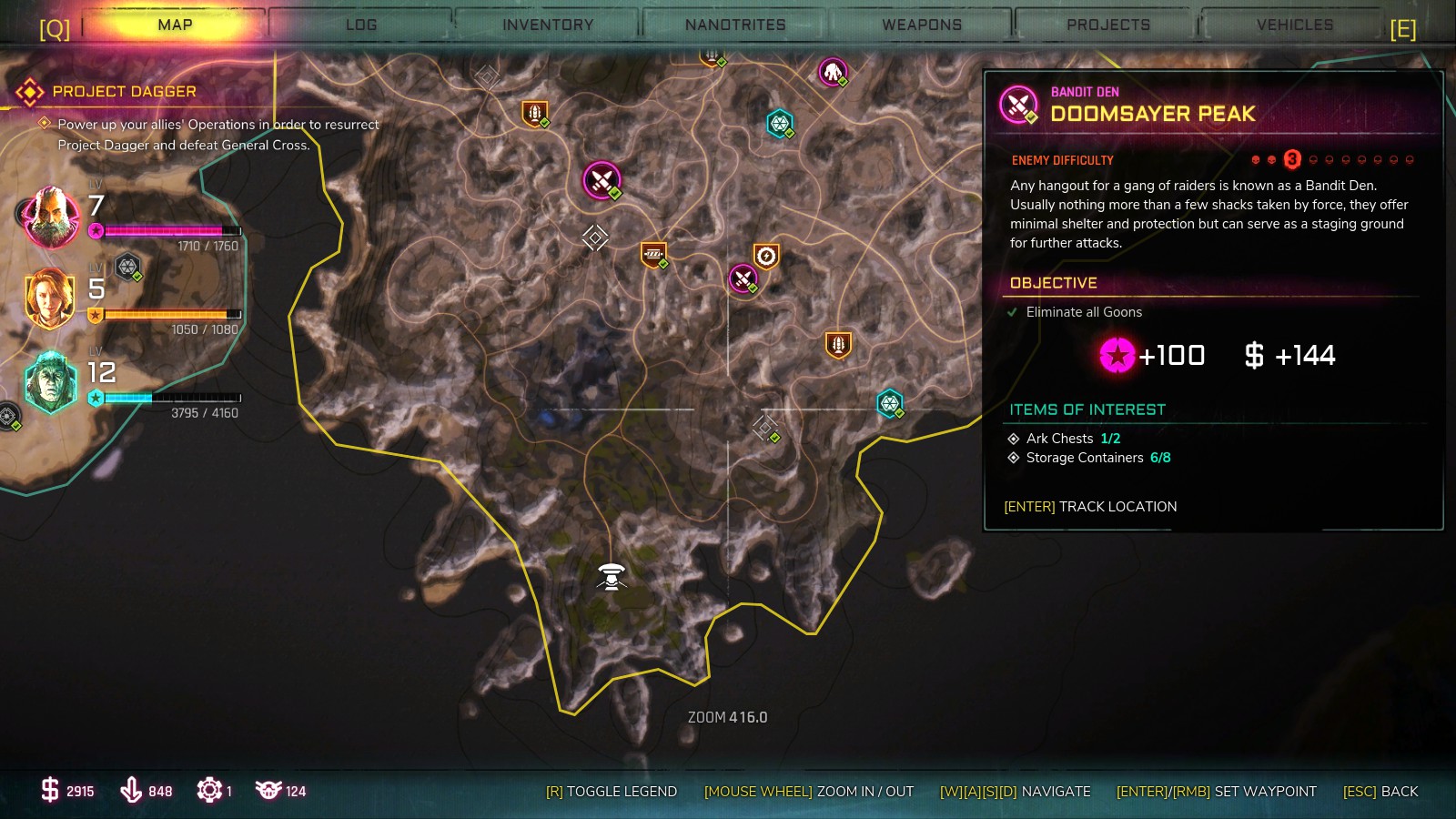 If there’s one thing you can count on, it’s references to other id Software games in an id Software game. Doom is, of course, the studio’s most popular franchise, so it’s not surprising that there are a number of Doom Easter eggs within Rage 2. So far only a few have been found, including the Mixom one above, but we’re sure more will come up. The first and most straightforward is the map point above, Doomsayer Peak, which is home to one of the game’s first Bandit Dens and so probably the place where you’ll cut your teeth on the combat. The name, of course, is a nod to the Doom Slayer, the alternate title for the main character in Doom. 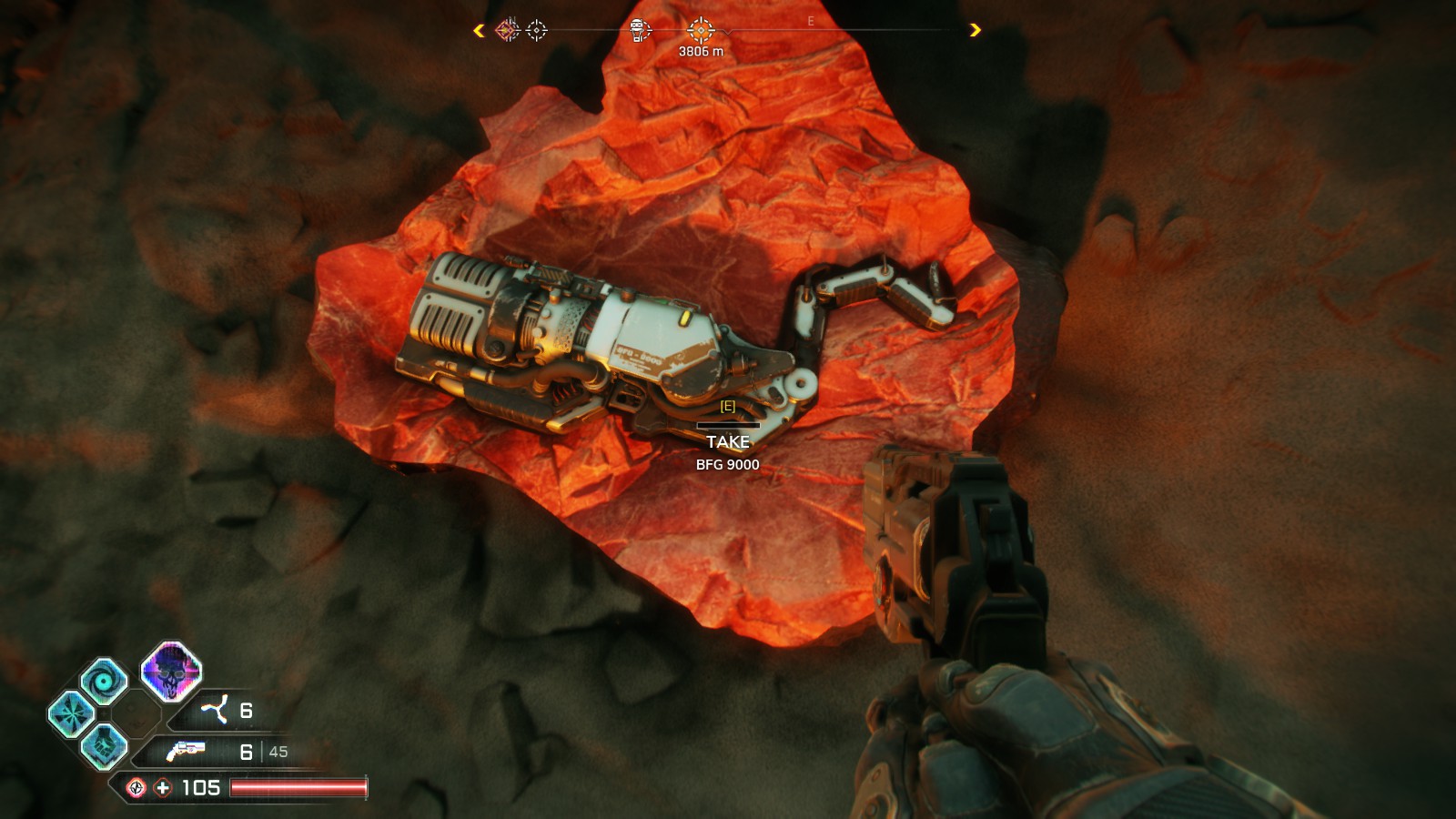 The other, even less subtle Doom reference is only available to Deluxe Edition holders. If you’ve got that, as you leave the game’s Vineland starting area you can see a red meteor, presumably from Mars. Head to this location and you’ll be able to find Doom‘s iconic BFG 9000, which you can use to your heart’s content. Nobody mention that the BFG was already in the first Rage… 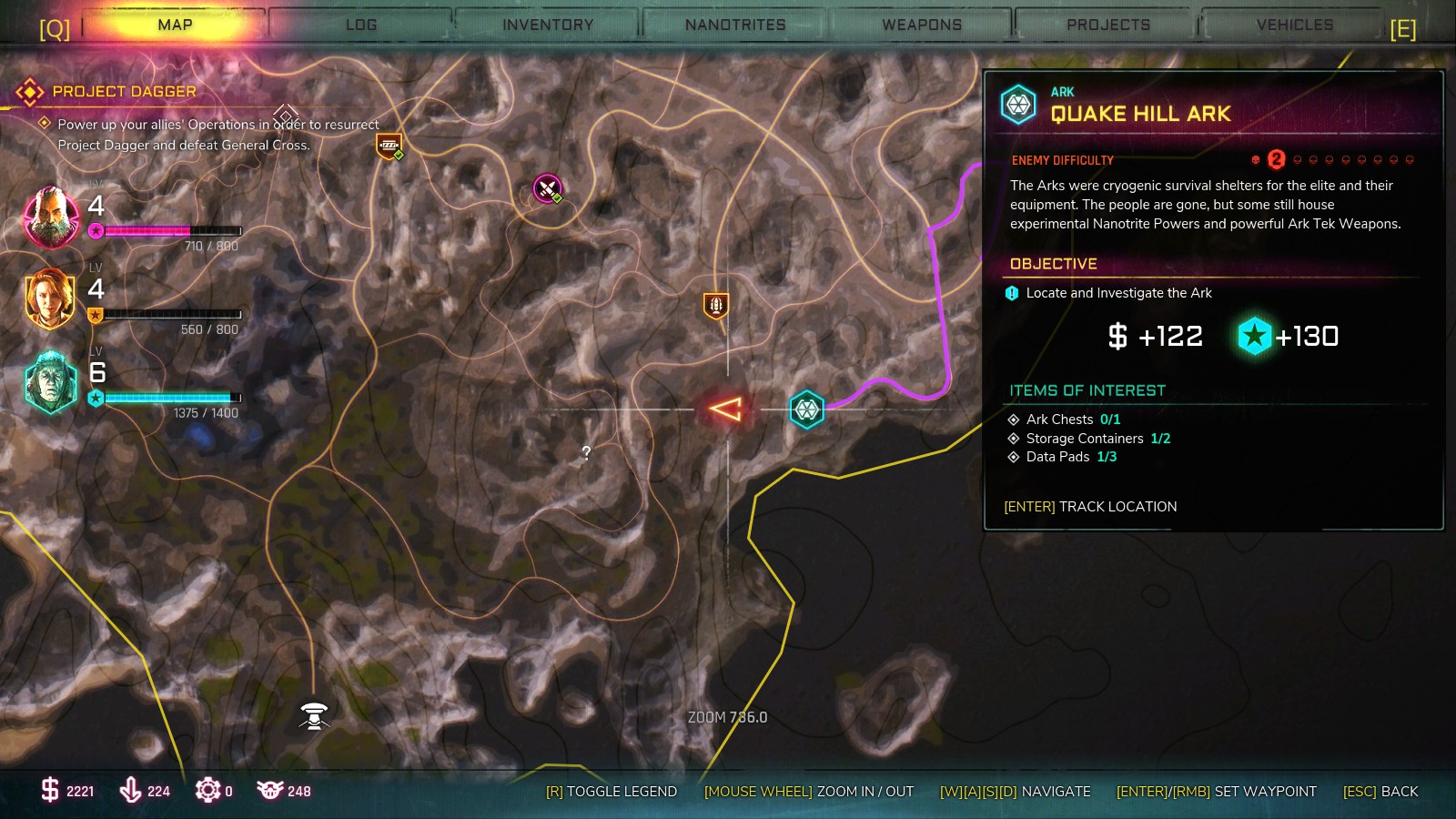 Slightly less popular than Doom, but no less valid, is id Software’s equally important Quake series, which is currently still supporting the most recent arena shooter in the series, Quake Champions. Quake gets a similar treatment to Doom in the first instance, which is the name of a map location, in this case the important Quake Hill Ark. You can get this location from Dr. Kvasir, and inside you can get the useful Vortex ability. It’s an important location then! 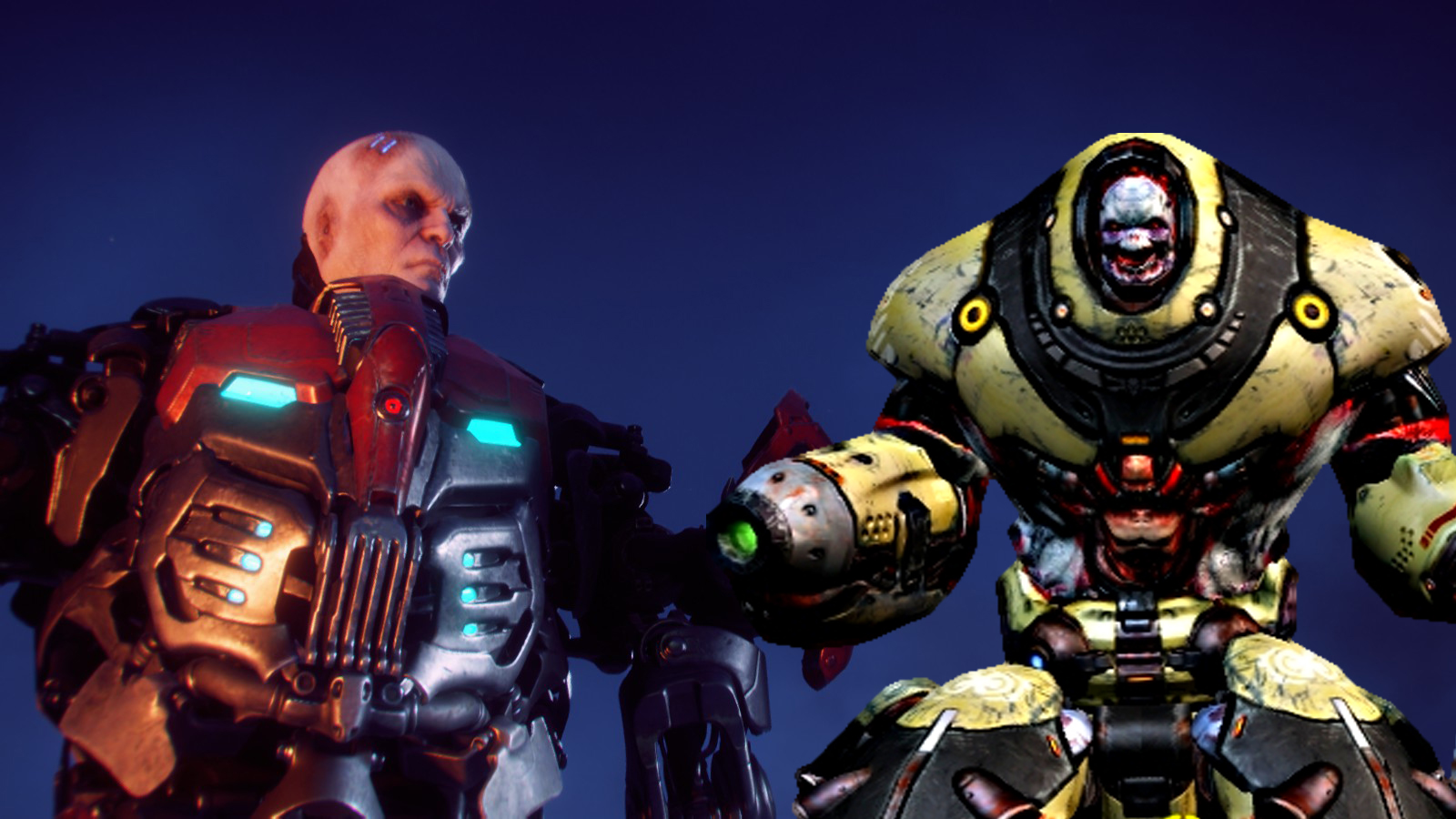 The other Quake reference is a little more debatable, but when it comes to id Software games, if it growls like a Pinky it probably is a Pinky. In this case, we can’t help but notice that the leader of the Authority, General Cross, looks a lot like the Makron, the leader of the cyborg Strogg from Quake II and Quake 4. He’s like a mix of the designs from both games, with the flesh head on top of a completely robot body, and face in his chest. The Authority in general seem to be a lot more like the Strogg in Rage 2 than they were in Rage, with weird cyborg soldiers.

This is a rather neat little Easter egg that references many professional wrestlers, although we’re counting it as WWE. In the town of Gunbarrel, home to John Marshall, there are many, many NPCs with names that seem to suggest actual wrestlers or wrestling moves. “Kenneth Alpha” is obviously a nod to Kenny Omega, Ronda Raynes is a combination of Ronda Rousey and Roman Reigns, Steph Rollins (Seth Rollins), Dave Ambrosia (Dean Ambrose), Bridget Hart (Bret Hart), and a lot more. The whole town appears to be populated by fans of wrestling! 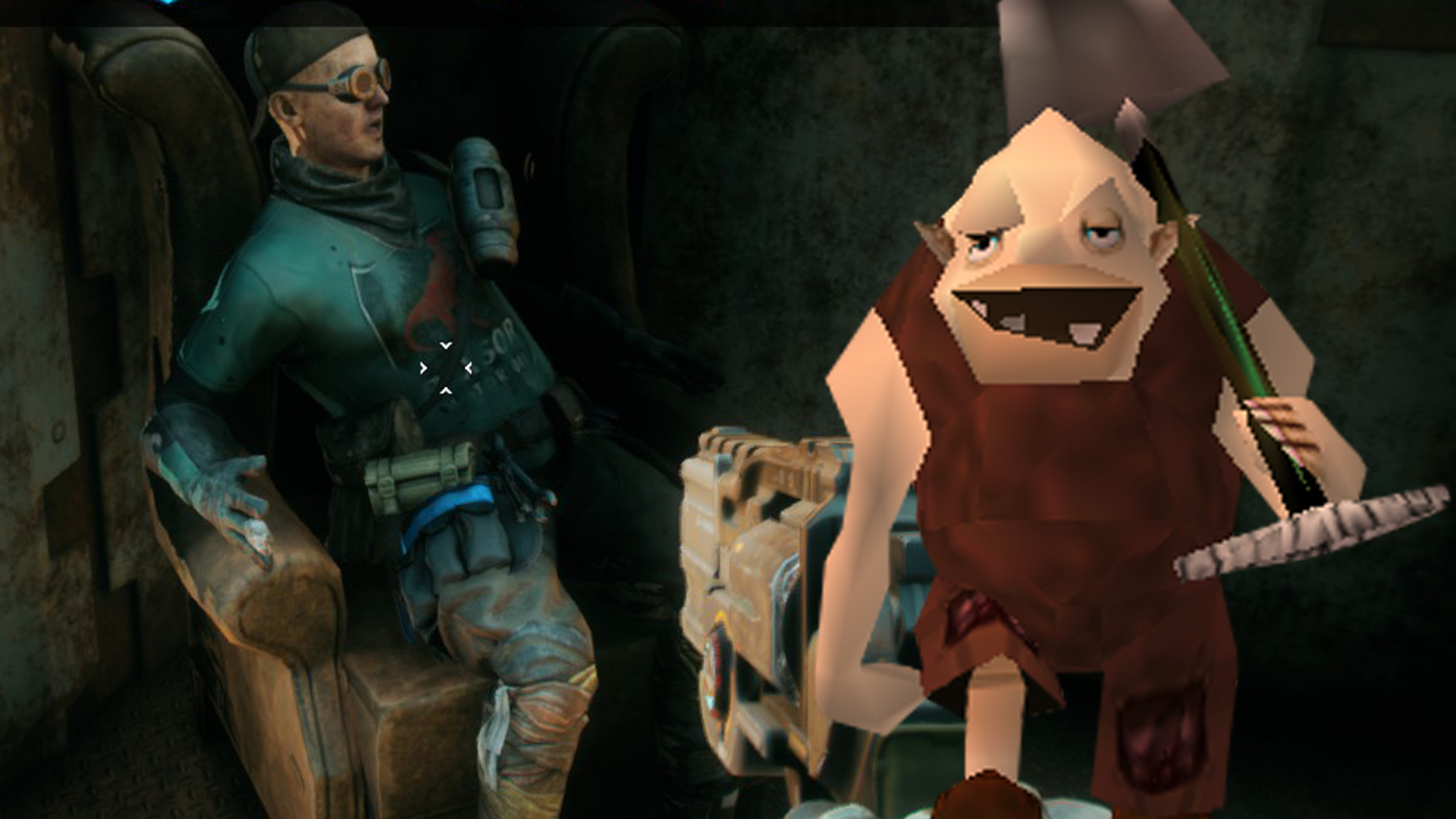 Around the middle of the map in the Broken Tract region, just south-west of Gunbarrel, you’ll find a graveyard on a hill called Lost Cause. Inside the little gravedigger’s hut here you’ll find the dead body of the gravedigger himself. If you pick up his final log entry on the Datapad next to him, you’ll discover that his name was Damper. This is clearly a reference to the famous gravedigger of Nintendo’s Legend of Zelda series, Dampe, who of course also dies while looking after the graveyard in his first appearance in Ocarina of Time. 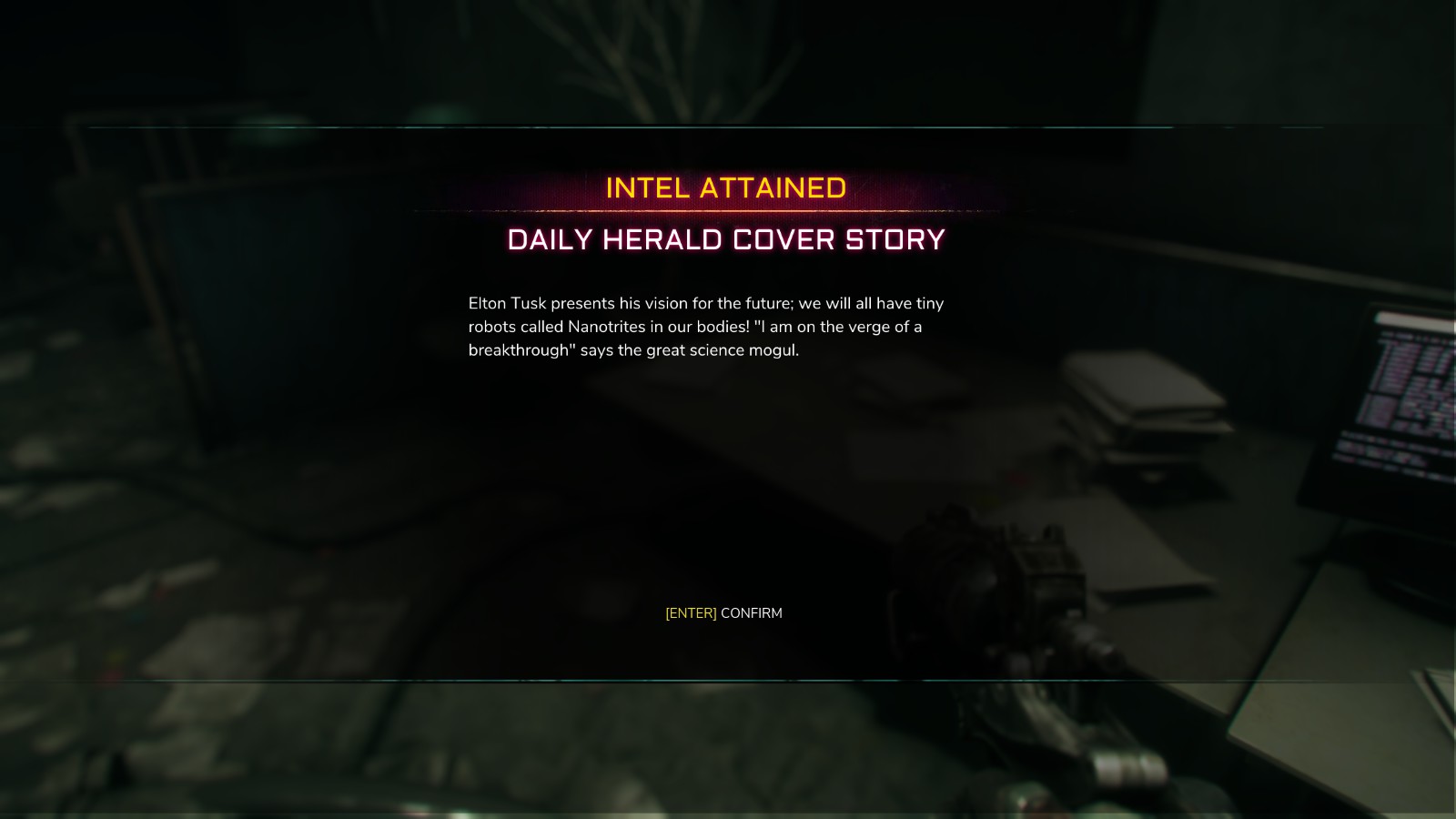 In the easternmost part of the Rage 2 map, just east of the ChazCar Derby, is a location called “Secret Bunker.” Head in and you’ll be taunted by a voice controlling the facility, and the datapads confirm this is the head of Tusk Industries, Elton Tusk. This is clearly a reference to Elon Musk, the billionaire CEO of Tesla and Space X. In Rage 2 Tusk has become, well, we’ll let you find out for yourselves. 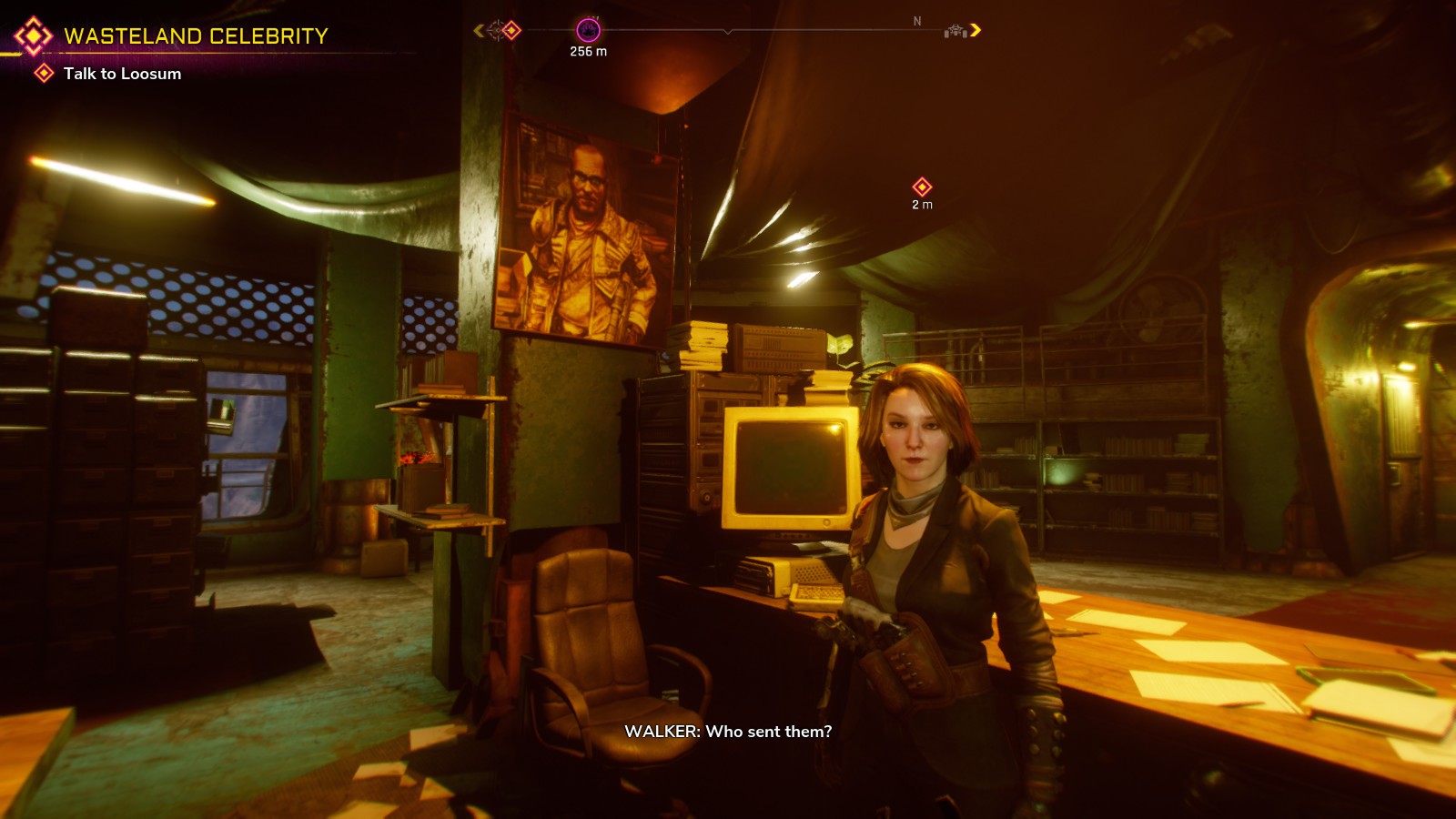 Of course, being a sequel there are many references to the original Rage, so we’ve picked the biggest and most direct two Easter eggs for fans of the original game. While several characters from Rage do appear in Rage 2, there are others who get name-checked too, such as Loosum Hagar’s father Dan Hagar. He was a major character in Rage 1, and was voiced by John Goodman. Loosum has his picture on the wall of her office, along with her uncle, and both are screenshots from the first game. 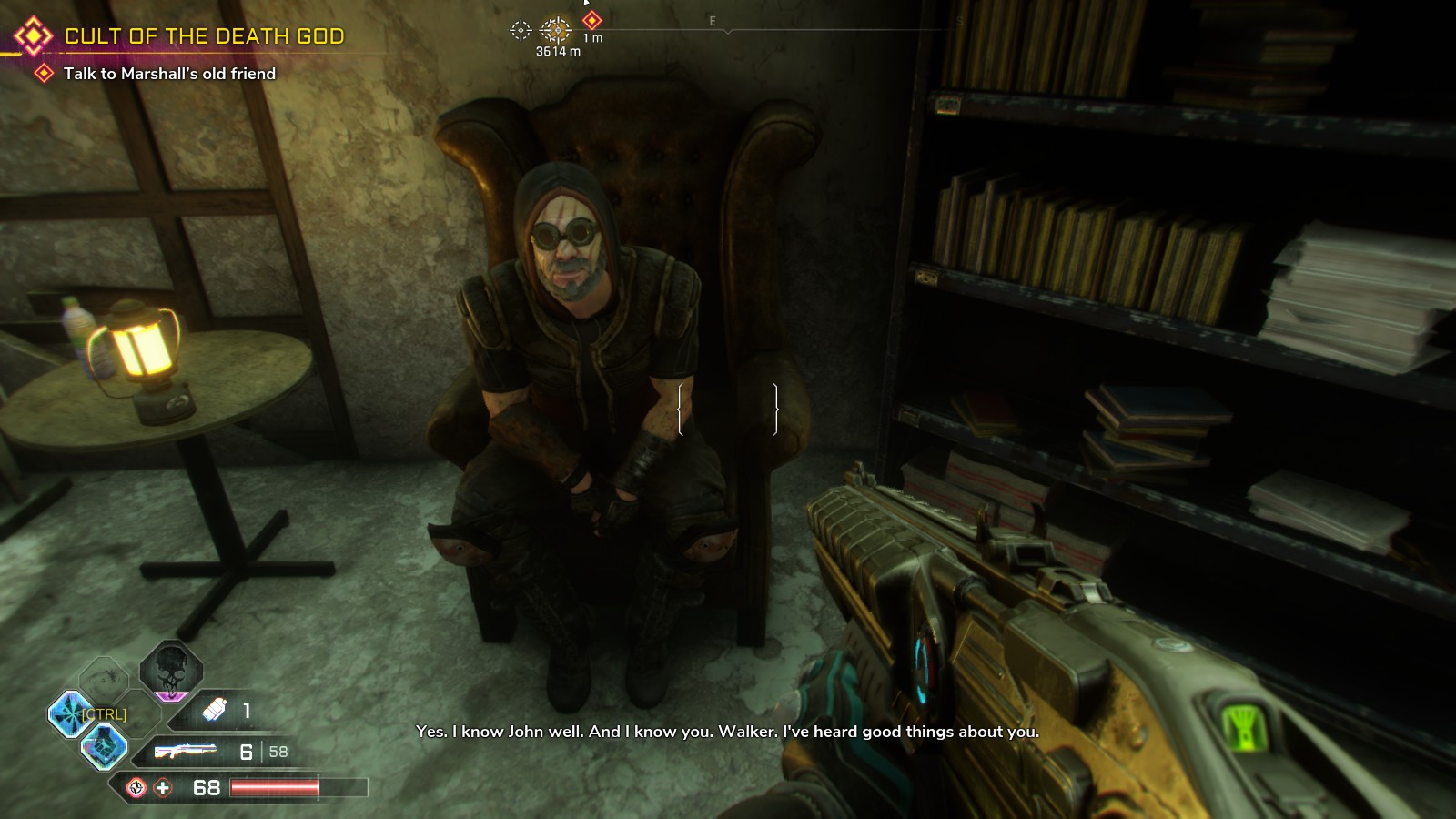 The other big nod to the first Rage is a pre-order bonus. The Cult of the Death God mission sends you looking for the armor and Settler Pistol of Nicholas Raine, the player character from the first game. You meet this unnamed figure in a hut, who gives you the mission, and he disappears when it’s over. The game strongly suggests that this is Nicholas Raine himself. Which is neat.

A riddle protects the path to a secret in Dying Light 2. A clue in the VNC Tower gives players…
12 months ago

Eggs from a Space Cock?
12 months ago

Project Warlock Blood Easter Egg | How to get the I’m dead… again? trophy

A lust for Blood... or trophies.
Games 3 years ago