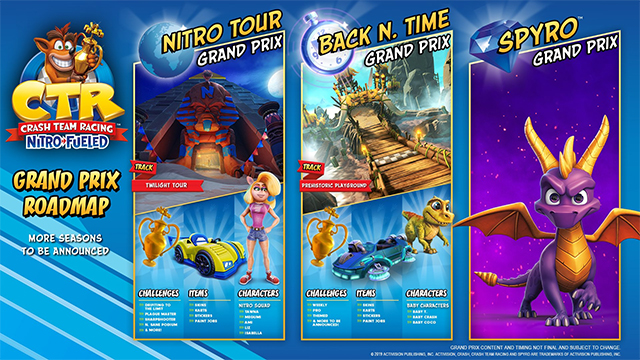 Spyro is not currently in Crash Team Racing Nitro-Fueled. However, he will be in the game’s third season of content, as shown in the picture detailing Beenox’s roadmap for the game. We do not currently know how long each season is so we won’t know exactly when people will be able to unlock Spyro. All we know for sure is that the first season will start on July 3.

But how do you unlock Spyro in Crash Team Racing Nitro-Fueled when the third season of the game roll around? While we don’t yet know exactly how to nab the dragon, he’ll more than likely get something you can earn via Wumpa Coins or Nitro Points.

Wumpa Coins are a currency that you can earn in any mode of the game. You can spend these in the Pit Stop, which is the store for the game where players can buy cosmetics and racers. Players can even purchase the first season’s racers in the Pit Stop with Wumpa Coins, so it suggests that Spyro could be the same way when he is available in his own season.

Nitro Points act as experience and you get more by completing challenges. These challenges range from “top speed, power slide, reverse, and other competitive challenges” and they are said to test you more as the season progresses. Leveling up earns you more exclusive rewards and it sounds similar to a Battle Pass-like system.

Another season begins.
Games 2 years ago

How to unlock Leatherface in Modern Warfare

Crash Bandicoot 4 Triple Spin | How to use

It's key for Time Trials.
Games 2 years ago

Will Crash Bandicoot 4 get a PS5 upgrade?

Will Crash grace the next PlayStation?
Games 2 years ago