The Crash Team Racing Nitro-Fueled 1.04 update patch notes bring the biggest changes the game has seen since its launch just under two weeks ago. Not only does it mark the beginning of the big Grand Prix event full of skins, karts, and other cosmetics, but it also fixes a number of bugs and adds some quality of life additions as well. This new patch is a hell of a way to kick off the first update for the beloved kart racer. 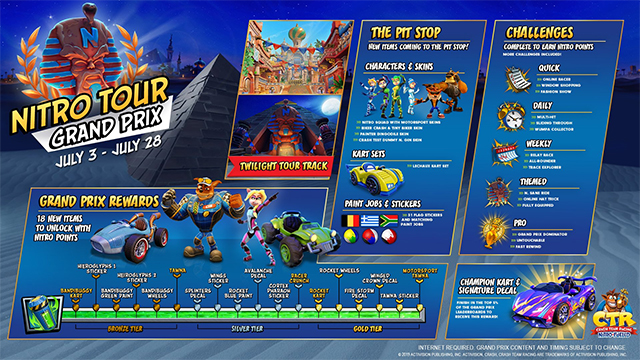 As was noted before launch, this patch kicks off the Nitro Tour Grand Prix for CTR. The Grand Prix acts as a limited-time event that runs from July 2 at 5:00 pm PT to an unknown time on July 28. Completing challenges earns you Nitro Points, which fills a gauge sort of like a battle pass from Black Ops 4 or Fortnite. As this gauge fills, players gain more rewards. These 18 rewards will only be available as part of this event and might come to the Pit Stop at a later date. You can see the rewards in picture above. These items include:

These are attainable via challenges that are separated by quick, daily, weekly, themed, and pro. There will even be a special kart and decal for those in the top 5% of either of the new leaderboards (more on that below).

While that’s all coming as part of the event, there will also be some new items included in the Pit Stop that will be purchasable via Wumpa Coins. These items are likely to stay around after the event:

Some of these Pit Stop items will come with bonuses that will boost how fast your accrue Nitro Points. There will be a little icon near the items in question.

While the event and track highlight the Crash Team Racing Nitro-Fueled 1.04 update patch notes, there are a few additions that will make the game more pleasant to play. The game will now play podium animations online like in the adventure mode if you finish in the top three. Most skins have unique animations so that’ll encourage more people to use fancier skins.

Character icons in the top four icons and mini-map will now reflect the user’s skin. This helps players discern who is who and is yet another way to show of your fancy cosmetics.

It’ll also break down how you earned your Wumpa Coins at the end of each race. It was hazy and hard to pin down how much you’d earn after you sped across the finish line, but now you’ll know exactly how the game is doling out coins. Beenox is also adjusting the earn rate but didn’t specify how.

All villains from Crash Nitro Kart will now have a Velo Mask when they would previously use an Uka Uka Mask. This includes when these characters use the Mask power-up as well as when they fall off the track.

A “Message of the Day” will now display on the main menu. Most online games do this so the developer can directly speak to its audience.

The game will add two types of leaderboards: Nitro Point and Championship. The former tallies the number of Nitro Points you earn while the latter is based on your online performance. You get more points the higher you place in an online match. A signature decal and kart for the top 5% of either leaderboard will be distributed and be reset at the end of each Grand Prix. New prizes will be in every Grand Prix. 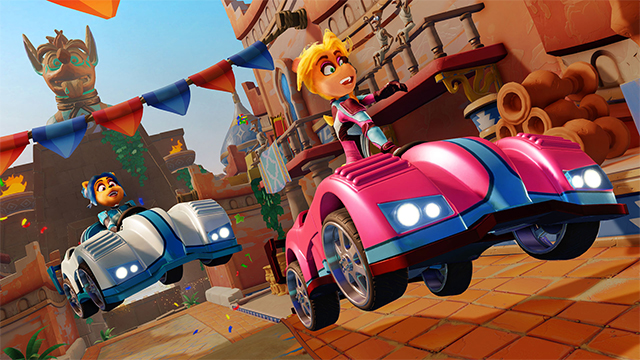 There are also some important bug fixes in these Crash Team Racing Nitro-Fueled 1.04 update patch notes. The issue affecting save data of PS4 players who have played a lot of Time Trials will be fixed. Players can now purchase the Electron Aqua paint job from the Pit Stop. Previously, it would say you purchased it but nothing would actually happen. There are also some vague collision fixes in tracks and some online stability improvements.

PS4 players, we have identified that your save data file has a chance to corrupt if the data for race ghosts in Time Trials becomes too large. This has impacted players who complete many Time Trial races.

We’ve been working to properly fix the issue and it will be addressed in this patch. In the meantime, we recommend that PS4 players avoid playing Time Trials as a preventative measure. This issue should not occur for Nintendo Switch and Xbox One players. Alternatively, PS4 players have the option to backup save data on an external storage device or backup save data to the cloud as an extra precaution.

We are blown away by the community support for Crash Team Racing Nitro-Fueled, and to say thank you for your patience while we work on these adjustments, we will be providing a one-time 2,500 Wumpa Coin gift to all players on all platforms who play Crash Team Racing Nitro-Fueled while connected to the internet starting this weekend through July 4. Expect this bonus to go live within 24 hours. Players can receive this bonus by completing a race while connected to the internet and then accessing the Pit Stop.† We encourage our players to submit support tickets through Activision Support if any issues or questions arise, because it helps us more quickly address issues impacting the community.

The Nitro Tour Grand Prix will be going live and you can begin earning Nitro Points and unlocking a variety of bonus customization content by completing challenges found within the Grand Prix menu†.

“Twilight Tour” will be a brand-new track available to Local Arcade and Online modes. The character Tawna will able to be earned through completing Grand Prix challenges and earning Nitro Points. You will also be able to earn additional new items including karts, skins, stickers, decal, and paint jobs!

Leaderboards will be added to the Grand Prix Menu.

You can earn Nitro Points by completing challenges accessible in the Grand Prix menu. The more Nitro Points you gather, the higher you’ll climb the leaderboard!

You can earn points based on your performance while playing online multiplayer: You’re given a number of points each time you complete a race in online multiplayer†. You receive more points the higher your placement is when each race is over (first is the most, and eighth place is the least). The Leaderboard is unlocked after you finish your first online race.

Leaderboard rewards will be distributed on the first day following the Grand Prix and will reset at the end of each Grand Prix season.

A variety of new content will be added to the Pit Stop including karts, characters, character skins, decals, paint jobs, wheels, and kart stickers that can be redeemed with Wumpa Coins†. Don’t forget to check the Pit Stop to see refreshed content!

When visiting the Pit Stop, you’ll notice that items that were added as part of the Nitro Tour Grand Prix have little Nitro cannisters over their icons. You’ll notice the same thing in the customization menu over the same icons. This small Nitro cannister with a percentage tied to it denotes the extra Nitro Point boost you’ll get whenever completing challenges with these customization options equipped. The percentage increase stacks with each customization item you have equipped. So get collecting, and get stacking!

As a special call-out to some of the new additions, the “Nitro Squad” characters Ami, Megumi, Isabella, and Liz can be redeemed using Wumpa Coins in the Pit Stop and flags from nations around the world will be added as kart stickers.

Podium animations will be added to online matches when you finish in the top 3 of an online multiplayer race.

A “Message of the Day” feature will be added to the Main Menu. Check back daily when your system is connected to the internet for important messages!

Adjustments will be made to the Wumpa Coin earn rate, and additional information on the earn rate will be added to the end-of-race report, so you can know how you got to your number.

The mini-map icons and racer icons will now represent the character skin that you have equipped.

The following issues will be addressed in the patch:

8a. Global Save File Corruption Issue on PS4:

Will address an issue where Users were unable to purchase the “Electron Aqua” paint from the pit stop.

Will address various known online stability issues related to the lobby, arcade, adventure, other parts of the game, and menus.

Collisions of certain maps have been reworked to remove stuck spots and possible exploit areas, along with an improvement to fidelity.

An issue where personal Time Trial and Relic scores are not highlighted in the “Highscores” menu will be addressed.

All villains from CNK will now be protected by the Velo mask when racing with that Power Up.

That’s it for this patch. If you have a question or issue while playing the game, feel free to reach out to Activision Support; we’re more than happy to assist you!

In this case, the eggs come before the chicken.
3 years ago