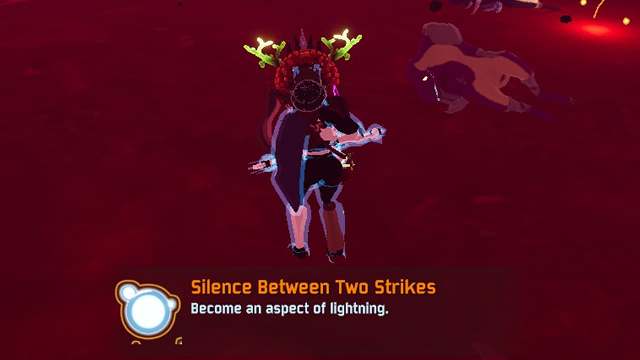 The aspect of lightning equipment in Risk of Rain 2 is called Silence Between Two Strikes. It has a very rare chance to drop from lightning-imbued Elite monsters. With it, you become an aspect of lightning, which replaces half your health with shields and drops lightning bombs onto monsters.

The Silence Between Two Strikes is one of the rarest drops possible in Risk of Rain 2. Along with other elemental aspects, it’s only ever dropped after killing an Elite monster. Their drop rate appears to be somewhere around 0.05 percent total.

If you want to become an aspect of lightning yourself, you’re going to need to kill a lot of Elites. Fortunately, this is made easier with Artifacts. The Artifact of Honor will turn every monster spawn into an Elite. Yes, it makes the game a lot tougher, but it also drastically increases your chance of finding Silence Between Two Strikes. The same is true for the other aspects, including Her Biting Embrace (ice), Ifrit’s Distinction (fire), and N’kuhana’s Retort (corruption).

If you go this route, you should also consider using the Artifact of Command. Since it allows you to choose your items, you can deliberately stack Old Guillotine, which can instantly kill Elite monsters under a certain amount of health. If challenge is no problem, consider adding the Artifact of Swarms to increase Elite spawns even further.

To become an aspect of lightning, you need to find the Silence Between Two Strikes item. It’s a very rare drop, so you’ll need to take out as many elite monsters as possible.

For both FPS and graphics.
Games 2 months ago

Destiny 2 Thunderlord Catalyst: Where to Get and How to Level Up

You can get the Thunderlord Catalyst in Destiny 2 by completing playlist activities. That means it’s a possible reward for…
Games 5 months ago

The Destiny 2 Season 18 release date is August 23. On that day, the Season of Plunder will start after…
Games 5 months ago