The Wordle answer 322 has been revealed for May 7, 2022. Today’s word could be a tough one for players with more limited vocabularies as the solution isn’t often heard in everyday conversation. With that said, there’s no additional challenge from a duplicate letter or anything like that. Need a hint? Today’s word has one vowel found in position 2. Still need assistance? Read on for the Wordle 322 answer. 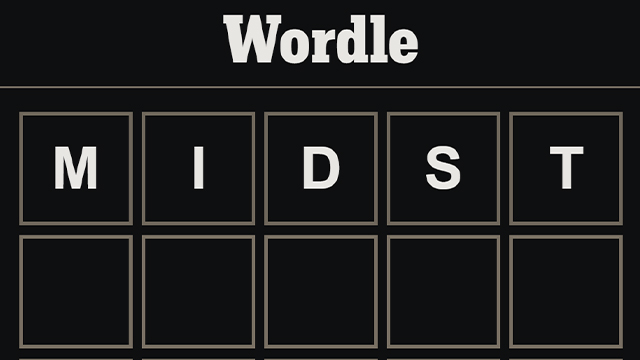 Note: If NYT decides to skip this word, then the answer will instead be “CANNY” or “FETUS.”

“MIDST” is a preposition that means “in the middle of.” As a noun, it means “the middle part or point.” (Definitions from Oxford Languages)

“MIDST” isn’t necessarily a tough word to find, as there are no pesky duplicate letters throwing a wrench in things. However, with only one vowel, many players’ starting guesses will do little damage on the first go. The “S” and “T” consonants are thankfully more common and should be found fairly early. The “M” and “D,” however, may prove more difficult.

Those finding it difficult to find the right answer should try using all of the available guesses to knock out as many letters as possible. So long as you aren’t playing on Hard Mode, which forces players to use confirmed guesses in all of the following attempts, it’s best to use each new guess to eliminate as many potential letters as possible.

Hunting for even more Wordle puzzles for today? Then have a gander at this guide on how to play the previous day, past, and future games. Or, if you want to retry today’s puzzle, simply open an Incognito tab or clear your browser cookies for a new save.