MGSV: The Phantom Pain Sells 3 Million Within One Week, On Track for Konami Profit

More than six years of hard work and investment has come down to this week. Metal Gear Solid V: The Phantom Pain cost Konami more than any other game it has ever funded at over $80 million, and it's demonstrated that it's very concerned as to whether or not it'll get its money back. A lot was riding on this release, and judging by early sales it'll be a big financial gain.

A Japanese Google ad suggests that MGSV: The Phantom Pain has sold over three million copies worldwide during its first week on the market. Many speculate that the PS4 version has sold the most copies, with PC and Xbox One coming in a distant second and third. 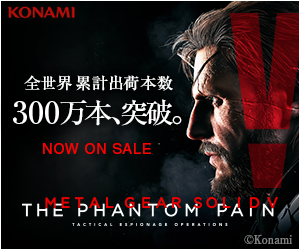 In contrast, Metal Gear Solid 4: Guns of the Patriots sold 1.2 million units on day one, and above four million during its first month on the market. Seven years later it stands at around six million units sold.

It might appear that this three million figure means that the game has earned its investment back. Unfortunately, if Tomb Raider's similar $100~ million development and subsequent struggle to profit was any indication, MGSV: The Phantom Pain will need to hit five million units sold before it starts to make money for Konami. The only variable that makes things difficult to analyze is the heavy presence of microtransactions in MGSV: The Phantom Pain. Microtransaction content has a high profit margin and can aid the pursuit for revenue in a significant way.

Whatever its sales end up being, MGSV: The Phantom Pain is a very special game. Standing at a rare 95 Metascritic score with a 4.5/5 from our very own Matt Utley, its years and millions of dollars of investment show in its fun factor, presentation, and polish.

Once again, Blue Box Games Studios has teased (another) tie between its upcoming game Abandoned and Hideo Kojima. However, this…
News 2 years ago

A Silent Hill PS5 game is reportedly on its way from Hideo Kojima, with the Konami horror series allegedly set to make…
News 2 years ago

So much for philanthropy.
News 3 years ago

Metal Gear Solid 5 is finally clear of nukes… on PS3