XSEED Games has announced the Fate/Extella Link release date window for the PS4 and PS Vita in the US and Europe. The upcoming game will be coming to regions outside of Japan in Q1 2019, which means a possible release date of sometime in early 2019. It was originally slated to release in international regions in winter 2018, while the Japanese version already launched earlier this year in June.

The publisher has also confirmed a Fate/Extella Link “Fleeting Glory” limited edition will be made available to players in the North America region. However, it is exclusive to the PS4 version of the game and will be priced at $79.99. It will include a physical soundtrack CD, a pack of 10 collectible 3-inch by 5-inch cards depicting every new Servant in the game, a 17-inch by 24-inch cloth poster, and a 3-inch by 4.5-inch diorama featuring the Servants Nero, Drake, and Scathach. These will all be housed in a custom box.

For players who prefer the standard edition or going digital instead, the PS4 version of Fate/Extella Link will cost $49.99. On the other hand, the PS Vita version of the game will be comparatively cheaper at $39.99. According to the official description of the game, the story will be set after the events of 2017’s Fate/Extella The Umbral Star. It will add a total of ten more Servants to the existing roster of 16 playable characters. New Servants include fan-favorites like Astolfo, Charlemagne, Lancelot, and more.

Another new feature coming to Fate/Extella Link will be the ability to participate in four-on-four online battles with other players. However, this will only be added to the PS4 version of the game. The Fate/Extella series of games features hack and slash gameplay similar to that of Koei’s Dynasty Warriors franchise, where players will engage whole armies of enemies. They also feature musou-like special attacks, which are referred to as Noble Phantasms in the Fate universe. 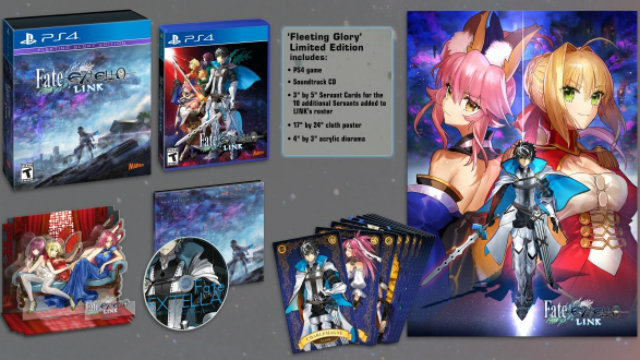 Born in Amsterdam, raised in Malaysia. Comics are my passion. A gamer and science fiction enthusiast. PSN: AlleefAshaari