PlayStation has published a blog post outlining what we can expect from the upcoming Resident Evil 2 DLC. If you thought Resi 2 was scary before, just you wait; one screenshot reveals you’ll be coming up against purple gas zombies. While it isn’t clear what these zombies or their unsettlingly-colored gas does, it will likely be terrifying. 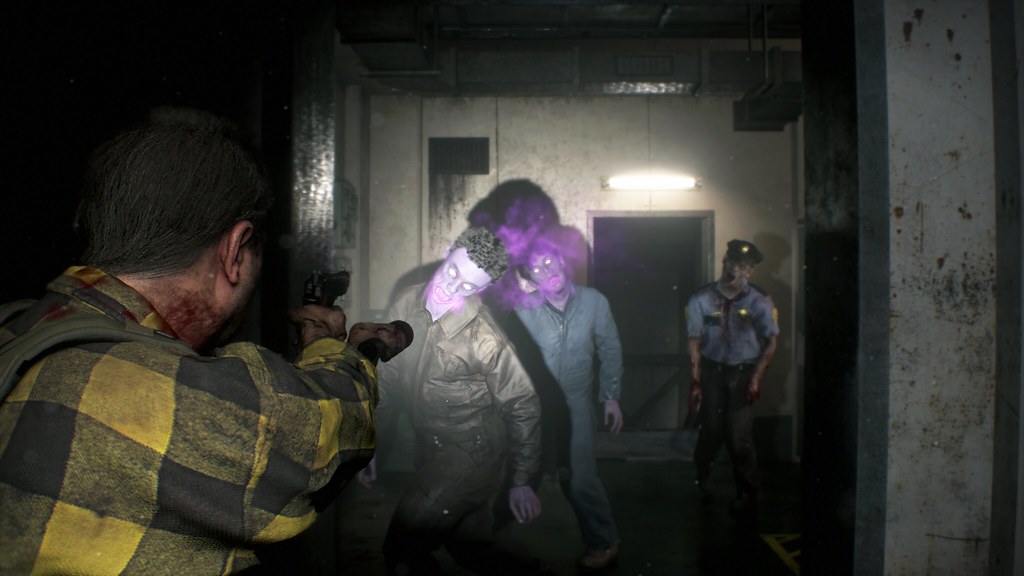 In the blog post, Kellen Haney (Social Media Specialist, Capcom USA) provides details about the upcoming “The Ghost Survivors” DLC. The free DLC will feature three different stories based in an alternate reality where we see how three deceased characters’ nights would have played out had they survived. Haney explains “There’s a good chance you’ve seen or played The 4th Survivor, a tough-as-nails additional mode that follows Umbrella Security Services (U.S.S.) agent Hunk … or The Tofu Survivor… The Ghost Survivors has a similar premise.”

The story “No Time to Mourn” features the owner of the famed Gun Shop Kendo store. The second tale is called “Runaway” and follows the mayor’s daughter Katherine as she hopes to escape the city. The remaining mission sees you control a mysterious U.S.S. agent named Ghost in “Forgotten Soldier.”

The blog post states that unlike “The 4th Survivor” and “The Tofu Survivor”, you are able to pick up more items than what you start with. Of course, those purple zombies (which you can see above) will be along for the ride. Also, you can acquire items by defeating backpack-wearing zombies and using vending machines. In a further attempt to make the game more accessible, the DLC sees the addition of a Training mode. The mode lowers the difficulty of the game, provides additional items, and more slots for storing those items.

“The Ghost Survivors” is a free DLC for the Resident Evil 2 remake and can be played for February 15. If you are still playing the base game, we have tips on how to avoid Mr. X. For those hungry for portable scares, we discussed a potential Switch version of the game.