Ghost of Tsushima customization lets you specialize your playstyle and armor

Players will be able to choose the armor they can wear and that can “give you different mechanical advantages,” according to Creative Director Nate Fox. He also noted it lets players “accent [their] chosen playstyle.”

The Omamori Charms (no, not the ones from Nioh 2) are chief among these as they are perks that yield certain advantages. The demo showed ones that let the player heal outside of combat, coated wind chimes with poison, and get 25% health back from smoke bombs. 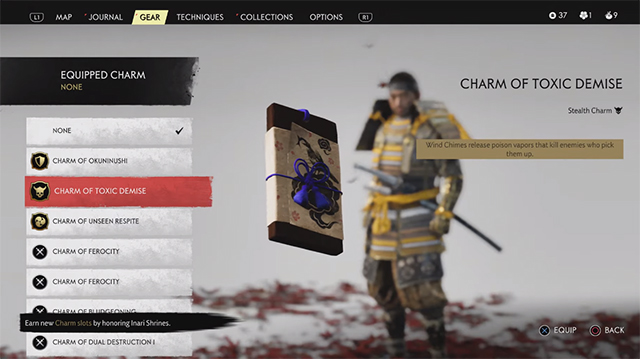 The first one seems geared more toward samurai players while the latter two appear to sneakier tools for the ghosts out there. The game also labeled them as defense, stealth, and utility charms as well. Players can also earn new slots by finding certain shrines and praying at them, which was also shown in the demo.

Changing color is also important. Dye flowers are scattered throughout the lands and can change the color of certain gear. These let users “fine-tune the look” of their chosen armor so you can match and look good while murdering Mongolians.

Sucker Punch did not show these pieces of armor or how much they also augment your playstyle (like a typical RPG). The team also did not reveal what techniques were in the game, but the pop-up guide did say that there will be technique points that let you choose what moves you can earn and upgrade. These sound a lot like traditional skill points.

Worth the upgrade price?
Games 1 year ago

Adventures on Tsushima.
Originals 2 years ago

PS5 gets a samurai showpiece.
News 2 years ago