Sonic Forces Looks Pretty Slick, But So Did A Lot Of Sonic Games

Earlier today Sega released the first gameplay footage from the upcoming Sonic Forces, a game first announced in 2016 via trailer that looks to bring the 3D games in the series back to their roots. This is being done presumably in an effort to save face after the very poorly received Sonic Boom: Rise of the Lyric. Forces looks nice in the footage, but so did lots of modern Sonic games pre-release that never quite panned out, leaving me a bit bewildered and unsure of what to think. In fact, the 3D Sonic series is changing and rebooting so often now, that “bewildered” describes how I feel about the blue hedgehog in general.

Before going further, the footage released today is below if you haven’t seen it.

When it comes to 3D Sonic, sometimes flashiness is enough. The game looks quite visually appealing. Sonic has attempted exploration and open-spaces with varying degrees of success over the years, and as fond as many of my Sonic Adventure memories are, there’s little denying that releases of the Colors, Generations, and Heroes varieties have seen more favorable response from critics and fans. These games merge platforming and pseudo on-rails highspeed ring collection to varying degrees of success, but all have cemented themselves as worthwhile Sonic games. Bigger risks, on the other hand, haven’t always paid off quite as well.

It’s actually a bit of a shame, because I quite enjoyed 2013’s Sonic Lost World, a reinvention that I felt was setting Sonic in a new and exciting direction. The game wasn’t perfect and definitely borrowed heavily from the likes of Super Mario Galaxy, but it really didn’t bother me; drinking from a creative wellspring such as Galaxy can go a long way in revitalizing a franchise in need of an adrenaline-shot, and there’s plenty of fresh ideas from that series to go around. Said influences were merged with the familiar style of Sonic titles mentioned in the previous paragraph as well as surprisingly enjoyable 2D platforming, making for an imperfect but ultimately sweet package. 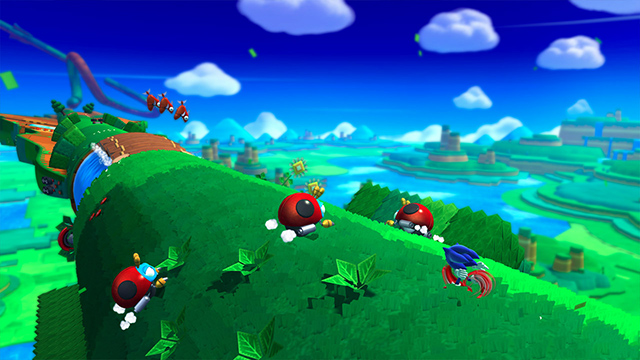 Lost World may have borrowed from outside influences, but the end result was plenty enjoyable.

Things seemed on the up and up, and the announcement that Sonic Boom would be developed by Big Red Button, a studio headed by Bob Rafei of Naughty Dog fame (he worked there for over 10 years), seemed to be the final push 3D Sonic needed toward true high-quality. Of course, we all know what happened with that game, and despite redeeming traits and a unique redesign across the character cast (long legs, athletic tape, and scarves were "in" that year), Sonic plummeted back to what felt like square one.

As such, another rebirth is in order, and I’m genuinely interested to see what Sonic Forces manages. The plan is to bring back the Classic Sonic and Modern Sonic design choice for players when it comes to the speed-addict hedgehog’s look, and development duties have returned to the hands of the traditional Sonic Team, with Takashi Iizuka at the helm as director (his resume dates as far back as Nights into Dreams, for which he was lead designer).

I’m pretty sure Sonic fans, even exasperated ones, want nothing but for 3D Sonic to succeed, but Sega can’t expect patience to last forever. Though his social media presence is without question a hoot, the character doesn’t exist in the first place without quality releases that cement importance and relevance heading into each decade. Today’s gameplay video definitely looks shiny, familiar, and nice, so I’m crossing my fingers for a game that amounts to just that.

Boost is out, Adventure could be in!
News 1 week ago

Open your heart.
News 1 year ago