After more than a year of development, season two of Elite: Dangerous has finally reached v2.3 a.k.a. The Commanders. So far Horizons has brought with it a large number of additions, including planetary landings, ship customization, looting and crafting, ship-launched fighters, passenger transport, and greater celestial variety in its Milky Way universe. Now it focuses its sights on the social and immersive aspects of the game environment.

I've been a big fan of Elite: Dangerous ever since I played the game for my first time on Oculus Rift. The feeling of transporting the mind into outer space, with stars and galaxies peppering the landscape as far as the eyes can see, is an experience unlike anything else in gaming. Although I've been impressed by a few of the additions of prior patches, v2.3 is my favorite of the bunch as it makes improvements in several key areas that could be deemed the main shortcomings of Elite: Dangerous.

In this article we'll go over the highlights of the patch, and give you an idea why it's 10.5GB in size.

Note that this update has been deployed for both its PC and Xbox One versions.

A new Commander Creator has made its way to Elite: Dangerous. Going forward, players are able to create a custom character using a wide range of options. Gender, hair style, facial mapping, clothing, and much more are available, providing room for the game's hundreds of thousands of players to be portrayed with distinct avatars.

Your character is represented in a thumbnail similar to EVE Online, providing the opportunity for you to demonstrated your character and his or her personality within the game world for the first time ever. In addition, the character can be seen inside the cockpit of any ship he or she pilots.

Like many space sims, Elite: Dangerous often suffers from issues with immersion. Much of this is due to how you as a player are presented as a space ship, unlike the 3D avatar representation of games like World of Warcraft and Final Fantasy XIV. The only exception to this is the generic default character that every player has assumed the identity of since the game's launch. This has proven challenging for the long-term interest of many players who expect to be able to stand out as an individual in the game world.

While at present you can't walk around in environments, that is something developer Frontier Developments is considering. For now, at the very least you can define a visual profile for yourself and others to see, while also having a custom character that is visible within the ship and available for screenshots. 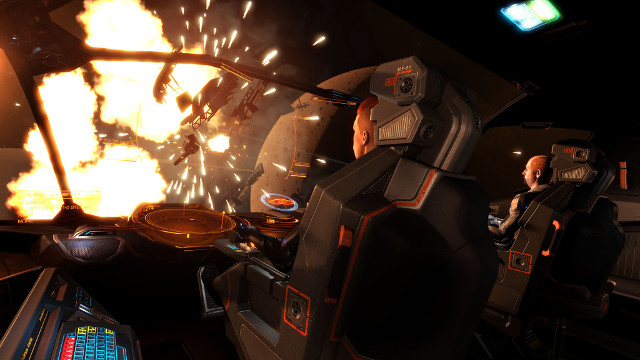 Expanding upon the social implications of Holo-Me is new multicrew support. First, it's important to understand that up until v2.3 all ships, no matter their size, have been incapable of housing more than one player. While v2.2's addition of deployable fighters helped in this regard to some degree, being able to house more than one player within a ship is something most players have desired since Elite: Dangerous' launch.

It is now possible for more than one player to enter a ship. No longer are there empty chairs that can't be sat in, your friends and accomplices can jump on-board and fight directly alongside you. There are even roles, including the Helm who pilots the ship, the Gunner who handles firing operation, and Fighters who are deployed into battle in a separate, much smaller ship not too dissimilar from drones in EVE Online.

This is particularly beneficial in cases where you're piloting a large ship, such as the 900 ton Federal Corvette. It's always been a bit silly that these larger class ships equipped with more than a dozen hardpoints could only be commanded by a single player, but that's no longer the case.

Social interaction has been encouraged greatly with what is fundamentally a co-operative option. This ties together incredible well with the new character creator, which means that you will see the custom character of your friends when on-board a ship. A good chunk of the social emptiness of Elite: Dangerous has been cast away with these two additions. 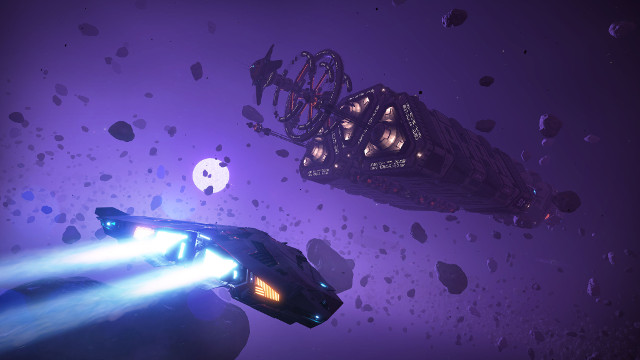 You could argue that Elite: Dangerous is one of the most photogenic games on the market. While screenshot support and a free-moving camera have been supported in the past, what's been added in v2.3 goes well beyond what we've seen before.

There are now a total of 10 predefined interior and exterior camera angles for you to toggle between. This makes snapping epic moments and beautiful sights far easier than before, where you'd previously have to slowly position your camera into an angle using quirky controls. You can expect to see much better film-making from the game, and high quality fan YouTube videos as a result.

To ensure that screenshots of ship interiors are attractive, a lot of work has gone into remodeling inside each ship. As you look around inside of a ship you will notice a greater level of detail, made better by the new character models that inhabit these spaces. 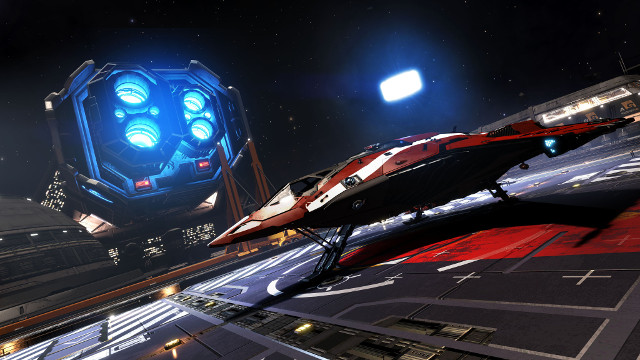 In addition to the three features highlighted above, there's also more to see and do in v2.3. This begins with all-new Incursion scenarios that range from Driver Challenge to Ship Launched Fighter Chalenge and even Speed Docking. Supporting them are new tourist beacons to further improve upon the tourism and VIP feature added in v2.2.

Perhaps the greatest addition in this category is a new asteroid base station. This provides greater diversity of stations to the game, this time with epic sights visible from the rings of various planets across the cosmos. Combined with the new camera suite, you can expect to see some tremendous images in the coming days.

As usual, the patch notes include a line which states "new mysterious things added". This likely alludes to further evolution of the game's alien presence, something which has been reason for an incredible amount of discussion over the past year. You can bet that a portion of the game's population will be venturing from planet to planet looking for clues.

Unlike this update and all before it, the upcoming v2.4 patch has been kept secret from the community. It's unclear what it'll deliver to the game experience, but it's widely anticipated among players and should see a release this Summer.

Snug as a bug.
Originals 2 months ago
7