Players Don’t Want PUBG’s UI to Be Easier, and That’s a Good Thing

PlayerUnknown’s Battlegrounds, the wildly popular multiplayer shooting game that pits 100 players against each other in a battle-royale-type segment, will undoubtedly undergo a series of changes before its eventual release from Steam’s Early Access program sometime next year. But, the Brendan “PlayerUnknown” Greene and his development team at Bluehole have sought the players’ advice in at least one case before deciding on a rebalance.

Earlier today, PlayerUnknown posted a poll on the game’s steam page, inviting PUBG players to weigh in and vote on whether or not to change the HUD/UI of the game that would make it easier for players to safely monitor their own resources. The proposed change? Make the quantity and availability of items and grenades visible on the player’s HUD, thus no longer requiring players to open up their menu.

The counterargument to this is that it makes the game too easy and takes away the realism that PUBG has worked hard to create. Checking your inventory as the system works now requires you to weigh the risks/rewards of doing so while leaving you vulnerable to attack. But, rather than make this call unilaterally, it was put to a vote. While the poll has not closed yet, it has already amassed more than 22,000 votes in the last 9 hours, and, overwhelmingly, players are choosing to keep the HUD and UI the way it is now. 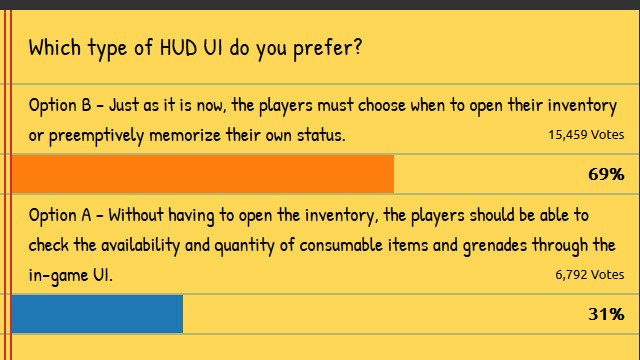 While posts on the PUBG sub-Reddit are decidedly split, the numbers on the poll are anything but. As of publishing this story, the vote is 69 percent in favor of keeping the UI the way it is (option B) and only 31 percent in favor of adding notifications to the UI (option A). More than 15,000 players voted for option B, and only around 6,000 for option A.

In this gamer’s opinion, this is a very good thing. PUBG has had so much success, in part, because of how immediate and raw it feels. You’re inside a massive battle to the death surviving as much by your wits and critical decision-making as you are your fast reflexes in combat. This feeling sets it apart from other competitive shooters that give the player a ton of information via the HUD that they would otherwise have to keep track of on their own.

Also, PUBG already has a few features that make it easier for players than it perhaps should be in a realistic setting. For instance, you already have hotkeys for medkits, painkillers and bandages, whereas one would think these would be stored in your inventory, which would require the player to open the inventory and select the item. If the game gets nudged too much in the more casual shooter direction, PUBG might lose a good portion of its player base, gaudy as its player count may be.

All-in-all, the player base of PUBG is making the right choice, and it’s good to see that the developer is even giving them that choice to begin with. As PlayerUnknown himself said in the post, “By working together, we believe that we can build and provide a better game experience for everyone.”

RedMagic 7 Pro Review: ‘The Gaming Phone To Rule Them All’

Built for gamers.
Tech 10 months ago
6

Tiny Tina’s Wonderlands Review: ‘The Same Thing Gearbox has Been Serving for 10 Years Minus the Humor’

Not so wonderful.
10 months ago