Red Dead Redemption 2 and the Politics of Player Expression

YouTube user Shirrako posted the video “Red Dead Redemption 2 – Beating Up Annoying Feminist” last week. The video shows Arthur Morgan doing exactly what is suggested, battering a suffragette in the town of Saint Denis for being “annoying.” Motherboard reported on the video, and the hateful, sexist comments that have been posted surrounding it.

By-and-large the comments are sexist, misogynistic garbage vomited through a keyboard by idiots that don’t respect women. The top comment (as of this writing) says, “this makes me feel bad because this was the time when women fought for real rights but still funny none the less [sic].” If it’s taken completely out of context for the time period, it could maybe be funny. Except when you take a moment to learn about the suffragette movement, you’ll see that there are dozens upon dozens of accounts of women being beaten and assaulted just for being suffragettes.

The next highest comment says, “giving women the right to vote was a mistake.” which gained over 1,000 likes and 115 replies in less than two days. A vast number of the comments are mocking feminism, women’s rights, and saying how “epic” the video is. Motherboard asked Shirrako about the viral video, and the comments it has attracted. Shirrako handed them a limp response about how the NPC was just annoying, and how it was simply a funny moment from their stream. Regarding the comments, Shirrako said, “I mean obviously, I don’t agree with the sexist comments, but there is not much I can do about them, I don’t like censoring people’s opinions, regardless if I like them or not.”

That is plain bullshit. Shirrako has gone on to post several more videos harming the same suffragette, and there are a number of content moderation tools that YouTube, or individual YouTubers could use to stop this harmful video from spreading. The most aggressive one would be to take the video down, or to disable comments on the video. But Shirrako has found a good source to pull video views and subscriber numbers to their channel. Shirrako has leaned into the video’s position, and posted other videos in the same vein. Several others featuring the “annoying feminist” see Shirrako feeding her to pigs, an alligator, and tossed in front of a train. Others show Shirrako antagonizing a Chinese man, “deporting” a Mexican, and beating up a deformed man in Red Dead Redemption 2. The channel has over 500,000 subscribers but most videos range from a few thousand to under 100,000 views. The “Beating Up Annoying Feminist” video was a massive outlier, and had likely helped bring substantial ad revenue for the channel and for YouTube.

On Wednesday, November 7, Shirrako’s YouTube channel was banned. Shirrako tweeted that their account was closed by YouTube because it promoted violence against women. The account has since been reinstated, alongside all its videos, including the “Beating Up Annoying Feminist” video. We reached out to Shirrako regarding the situation, but have not received a response at this time. They also made several jokes on Twitter after their account was reinstated. 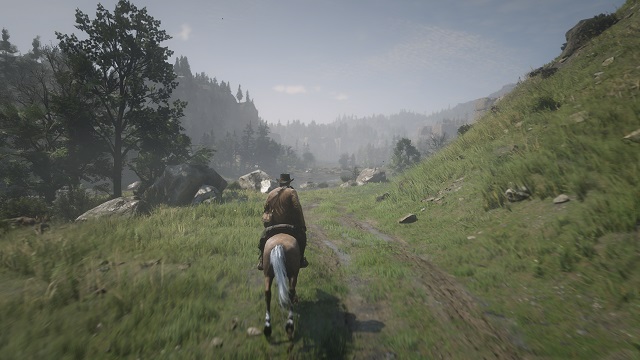 But Shirrako is just a YouTuber, and not the developer of the most successful entertainment products in history. That would be Red Dead Redemption 2 developer Rockstar Games, a company that has skirted controversy, lawsuits, and outrage since the early aughts with Grand Theft Auto 3. Rockstar makes a point to always go after both sides, and it has continued that in Red Dead Redemption 2.

The suffragette in Red Dead Redemption 2 can be heard calling men “judgemental prigs,” which can play into current negative attitudes surrounding feminism and women’s rights. While Morgan agrees with her right to vote, he plays it cynically and says, “anyone dumb enough to want to vote, i say go for it.” The way Morgan interacts with the character, and how she is portrayed, hardly inspire sympathy for her or the women’s suffrage movement. Rockstar should have known the inevitability of Shirrako’s video, and the reactions it would garner.

The way Morgan interacts with the character, and how she is portrayed, hardly inspires sympathy for her or the women’s suffrage movement. Even though it’s a good thing to include on a theoretical level to flesh out the time period, Rockstar should have known the inevitability of Shirrako’s video and the reactions it would garner. Perhaps Rockstar did know but was willing to sacrifice that in order to give players unrelenting freedom within the open world.

The Ku Klux Klan acts as a counterweight to the women’s suffrage movement. Shirrako has posted several videos regarding the in-game KKK, but most of those videos simply show those encounters. Two see Shirrako beating up and killing KKK members. On one end, white supremacist extremists who believe the United States is to be clandestine, and free of the impure others. On the other, women who want to vote and engage in the democracy they live in. Players are free to interact with both groups using the same tools and systems. Other NPCs exist separate from the game’s systems, but the same morality mechanics tie them together. (Attacking the feminist gives the player negative morality, whereas attacking the KKK gives them positive morality.)

Children are invulnerable in Red Dead Redemption 2. A clear-cut editorial decision on the story Rockstar is trying to tell, and the characters it wants to portray. Arthur Morgan is not a child murderer, but he can kill just about anybody else in the game. He can punch feminists and take pamphlets from the Hitler-looking eugenics advocate. But by abstaining from taking a political stance with Arthur Morgan, Rockstar Games lets players express their own violent political views for millions online. 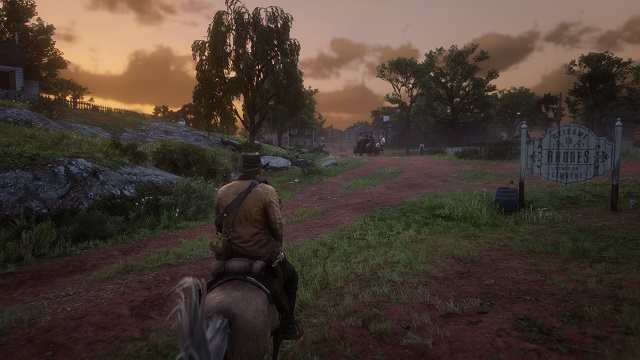 Now, Rockstar isn’t the only company to avoid taking a solid stance on politics, even if political commentary exists in its game. Ubisoft recently came under fire when it said The Division 2 was “not making any political statements.” The Division 2 is literally about a future civil war, set in Washington, D.C., so how can it not be political? According to Ubisoft, it simply isn’t.

The same circumstances came up with Far Cry 5 and it’s take on American gun culture, and religious extremism. And yet, Ubisoft won’t let its political games fall too far on either side of the aisle. Rockstar Games has done this time and again with the Grand Theft Auto series, parodying and critiquing modern society with unearned aplomb. These massive games don’t want to upset one side or the other, so they pay lip service to social and political unrest, but in a way that players take what they want from it.

While letting players not hit certain people in the world would go against the freedom Rockstar craves, it invites these toxic stances that are already prevalent in the gaming community and gives them more steam. Feminism has already been politicized in the video game realm, and letting players punch feminists fetishizes the anger felt towards people who just want diversity and fewer problematic games. The way she is poised is an open invitation for those who are mad at Battlefield 5 and The Last of Us 2, and that open invitation doesn’t let Rockstar or the YouTubers off the hook when they claim they are not trying to be political. She may as well have been jokingly named “Aneta Sarkasian” because, given how big its audience is, Rockstar probably knew enough people would want to abuse the suffragette for daring to challenge the masculine status quo.

Movies and film have long wrestled with the idea of creator’s intent. Studio Ghibli’s Grave of the Fireflies is often touted as an anti-war film, but director Isao Takahata has long denied the label. Most read the film’s themes as anti-war, but others can twist the film to become pro-war. Paul Verhoeven’s Starship Troopers is another movie that falls into the same space as Grave of the Fireflies. Verhoeven cast the film as anti-war, and as a satirization of propaganda films. But many still view the movie as pro-war, and celebrating fascism.

Red Dead Redemption 2 doesn’t directly attempt to make grand sweeping statements about politics. But it does comment on politics, both of its period and contemporary issues. Rockstar leaves those comments open to interpretation, much like Ubisoft’s apolitical approach to The Division 2. Even if Red Dead Redemption 2 had concrete views people would try to twist them to their own beliefs. But by leaving the game open-ended, Rockstar is allowing others to co-opt its art and tell their own version of Red Dead Redemption 2‘s story.

The ability to beat up suffragettes in Red Dead Redemption 2 is inherently political, as is so much of the game. The van der Linde gang in Red Dead Redemption 2 is seeking an unknown libertarian commune as the crushing weight of the government bears down upon them. Human rights, labor laws, racism, suffrage, and more line the tale of Arthur Morgan, with him giving each a passing glance before shooting another deer.

Some Red Dead Redemption 2 fans have fueled rumors that a Mexico expansion may be coming to the game. On…
News 12 months ago

A big get for PlayStation Now.
News 2 years ago

An amazing deal for new players.
News 2 years ago

A cheaper pass with no chance for earning back your Gold Bars.
News 2 years ago