This article contains spoilers for Life is Strange 2.

The first Life is Strange took an reflective look on the teenage experience from the friends you make and leave behind to the tragedies and injustices that happen just out of sight. Life is Strange 2, which debuted in September takes aim at the relationship between brothers, and the political hellscape that is 2018 and does so beautifully.

Although the game is actually set shortly before Donald Trump was elected president of the United States in 2016, it nevertheless paints a damning picture of the current political climate. But it doesn’t just state it on some passing newspaper but rather the impact it has on the young lives wrapped up in the vitriol and hatred that swept through the election and subsequent presidency. Games like Red Dead Redemption 2 and God of War might have captured everyone’s attention with their impressively shiny graphics and polish, but what Life is Strange 2 lacks in incredible vistas, it makes up for in raw emotion and a stark reflection of the times.

The tale revolves around the brothers Sean and Daniel Diaz as they struggle to cope with a series of familiar tragedies. Life is Strange 2 begins normally enough: there’s a love interest, a best friend, and an annoying little brother. But that falls away all too quickly and thrust the young boys into peril after witnessing their father’s murder.

A Dash of Real-World Politics 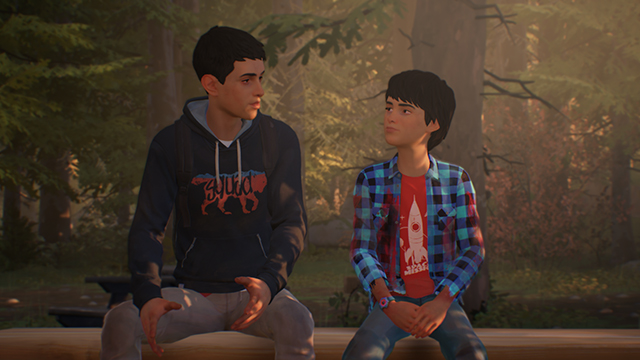 What follows next is the emotional and literal fallout of this travesty, as Sean, the eldest, decides to flee the city with Daniel in order to protect him. Obviously, the game is not so completely down to earth, as Daniel has telekinetic powers that manifested in the moment of his father’s murder. Like the first Life is Strange, these powers are important, but they not the focus of the game. Instead the game peers into the interaction between these two brothers, and how the world interacts with them as well.

Because it is not the supernatural powers that demonize young Daniel, but the color of his skin. Following on from the incident in suburban Seattle, the brothers find themselves out of the city, where they encounter the aggressive attitudes that the Trump campaign fostered in the country. It becomes clear here that developer Dontnod is not shying away from the current political landscape. You quickly see that in the way the boys are treated along with hearing an explicit mention of the infamous “wall.” While I naturally find myself more detached from American politics being based in the United Kingdom, the rise of right-wing populism and the effect Trump has had on the country has been felt nearly everywhere.

Politics, especially current politics, is something that most mainstream games are terrified to address. Ubisoft, for instance, goes out of its way to claim that franchises like The Division and Far Cry are apolitical. And while contemporary political games like Not Tonight have a somewhat comfortable niche in the indie market, most big games choose to shy away from or completely ignore the current political climate. Wolfenstein 2 is an exception, given that its marketing campaign that would almost directly quote Trump.

But not only does Life is Strange 2 take a stark look at the political aftermath of an increasingly white nationalist government in America, it puts you into the shoes of its victims. Sean and Daniel are not white, and this is a point of contention with the police officer, and the Trump supporters they encounter during their exodus. After facing the fear of a police officer unnecessarily drawing their firearm, the two brothers must contend with suspicious and intimidation that stem from the color of their skin.

Committing to Politics and Fiction 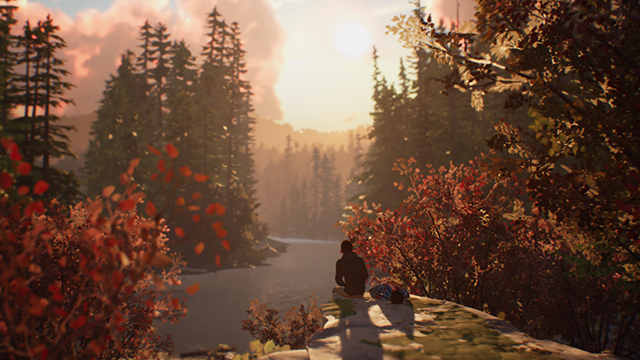 The world was by no means perfect two years ago before Trump took office, but the game reflects on how these events have shaped our society, actions, and opinions today in a way that so many other games refuse to examine. And while the undertones of this deeply divisive and destructive political force is evident throughout the game, the story and emotional impact of the decisions you have to make are as powerful and engaging as ever. Life is Strange 2 does not sacrifice its story, pacing, or characters to make a political point, but weaves them together in a way that most games don’t. It has something to say and shows a real look at a brotherly relationship. The other characters feel real too, for better and for worse.

Life is Strange 2 isn’t scared to look at the world and make you look at your world too. Players not only have to confront their own emotional fragility when they play Life is Strange 2, but also the state of the world, their place in it, and how it effects others. With its fantastic soundtrack, lovingly stylized graphics, emotional story, and hard hitting political commentary, Life is Strange 2 shows that games can be great interactive pieces of media even if they choose to show the world and its not so great ways. Despite what Ubisoft thinks, there is a way to do both.

Some Red Dead Redemption 2 fans have fueled rumors that a Mexico expansion may be coming to the game. On…
News 12 months ago
9

Nier and dear.
Games 2 years ago

Everything you missed from the Square Enix Presents showcase