In 1979, a man named Vince McMahon took the former World Wide Wrestling Federation
(WWWF, maybe?) and created the World Wrestling Federation. This move put wrestling
back in the spotlight and would eventually turn the “sport” of wrestling into
a major money making business.

Not to be left out of the action, media mogul Ted Turner attempted to buy the WWF. McMahon refused to sell, so Turner got a team together, hired some of the WWF wrestlers and created World Championship Wrestling.

As wrestling boomed, Extreme Championship Wrestling (formerly known as Eastern
Champion Wrestling) found its way into the market via TNN. Yep – the good ol’
country boys at the Nashville Network have gotten their hands on wrestling.
Yee haw.

ECW plays exactly like Attitude. Basic moves like the body slam, hip toss, and suplex are all performed exactly the same way. Executing special moves actually seem to be a bit harder to pull off, making Hardcore Revolution even more frustrating learn. It will take you some time and a moves list to master all of your wrestler’s moves.

The tons of options that made it into Attitude also make it into Hardcore Revolution. You get the same Exhibition, Career, Tournament, Pay-Per-View, and Create a Wrestler options. Match options are also basically the same. There are steel cage, deathmatch (hardcore), and last man standing matches waiting to be played.

The one new option that Hardcore Revoltion sports is the infamous barbed
wire match. Here, the ropes are replaced by barbed wire, introducing the Irish
Whip to a whole new world of pain. 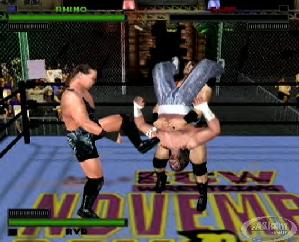 Hardcore Revolution‘s sound is everything you’d expect in a wrestling game. Mat slams echo and that meaty smack of a fist connecting with an unfortunate face is like music to bar patron’s ear. Ah yes, and let us not forget the fans. The fans of Hardcore Revolution are definitely true to nature, with incessant screams of “We want blood!!! We want blood!!!” And without a doubt, Hardcore Revolution is definitely the most bloody wrestling game I’ve ever seen. ‘Blood On’ is actually the default setting (or was it ‘Ketchup On’?). Geez, how barbaric.

The real ECW is definitely hardcore. The wrestlers pull off over-the-top stunts and actually bash each other up pretty harshly on a regular basis. I guess you need some kind of gimmick to pull people away from the WWF and WCW powerhouses. It’s just too bad that ECW Hardcore Revolution doesn’t do the real ECW justice. It is almost as if Acclaim went into WWF Attitude‘s Create a Wrestler mode, cranked out some wrestlers, and repackaged it under the ECW licence.

Shame on you Acclaim. Painting an apple orange doesn’t make it, well… an
orange. So unless you’re a hardcore ECW fan, SAVE YOUR MONEY. Oh yeah,
and props out to that wrestler named “Balls” Mahoney, who provided hours of
laughter on just his name alone… 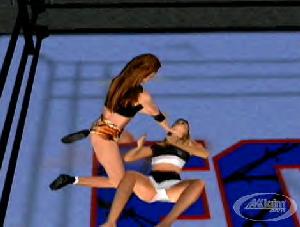 All the things that made Finally, a wrestler named Balls But only half as fun the second time Total ripoff
Friday

All the things that made Finally, a wrestler named Balls But only half as fun the second time Total ripoff
February 10

All the things that made Finally, a wrestler named Balls But only half as fun the second time Total ripoff
February 21

All the things that made Finally, a wrestler named Balls But only half as fun the second time Total ripoff
February 24

Maybe leave this one on the slab.
Film 1 year ago
9

You should stay.
Games 3 years ago
7

Grid is back but it hasn't evolved much.
Games 3 years ago