Swords have got to be the ultimate romanticized weapon. Powerful swords, such
as Excalibur and the Singing Sword, have been a part of legends that have endured
throughout time. Even today, tales of mighty warriors are not complete without
a blade. Where would Conan be without the Sword of Crom? How could Lion-O call
the Thundercats without that phallic Sword of Omens? What is Blade without his,
uh… blade? Enter the world of Gattsu (aka Guts) and his seven feet of whoop
ass known as the “Dragon Slayer.”

Sword of the Berserk: Guts’ Rage is Eidos’ latest action title for
the Dreamcast. Unlike the disappointing Fighting
Force 2, Berserk is a quality, action packed game that screams out
for attention.

Some of you may not know that Sword of the Berserk is actually based on the manga/anime series Kenpuu Denki BERSERK, by Kentaro Miura. Guts’ Rage is a side story of this series.

The standout feature of Sword of the Berserk is the never-ending amount
of blood that is spilt throughout the game. I am simply amazed that Eidos was
able to produce such a bloody game without driving the censors crazy. The sheer
bloodlust displayed in the game brings back memories of the classic Genesis
title, Fist of the North Star (also known as Last Battle in the
US). No heads explode in Berserk, but bodies can be cut in half.

Berserk‘s main gameplay concentrates on the use of the Dragon Slayer,
but several other weapons are at Guts’ disposal. Unlimited throwing knives can
be used very effectively in places too small for the monstrous sword, but only
do a minimal amount of damage. A hand crossbow is also included much to the
same effect. Guts also has grenades that can be used to take out small groups
of enemies. The best (and most powerful) auxiliary weapon that Guts wields is
a small cannon attached to his left hand. This little baby packs a major punch
and can blast enemies into the middle of next year.

Guts’ Rage excels in both graphics and sound. The game is full of crisp, smooth animations with no slowdown at all. Sounds and voice acting are the best in any Dreamcast title to date. Eidos was right on the money with this one, as bad voice acting would have killed this game. For all you anime theme freaks, Eidos decided to remix “Forces” from the Kenpuu Denki BERSERK soundtrack to use as the main title track for Guts’ Rage. We’re talking high-end production values.

As Guts fights through the hordes of evil enemies, he naturally begins to get pissed off. After all, a berserker’s work is never done. This is where his berserk meter comes into play. Each successful strike or hit that Guts takes increases the meter. When it’s completely full, Guts goes into a wild berserker fury, complete with glowing red eyes. During this limited time, Guts is virtually invincible. His attacks also gain speed and power. 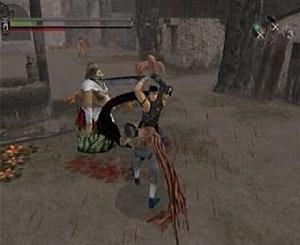 Adding
to the excitement are button timer sequences during some of the cut scenes.
These special cut scenes are much like the game play of the original Dragon’s
Lair. Gamers must press the correct button at the right time in order to
avoid danger. Fear not, o drunken style player, for a timer sequence failure
won’t kill you – it will just lead you down a more difficult path. Some doors
and barricades can also be broken down to reveal a different route. The multiple
paths in Guts’ Rage provide an added dimension.

Eidos also saw fit to include a few extras. Players can unlock gallery pictures after gaining access to the Battle Arena. Beating the game in easy mode will unlock a mini game called Puck’s Game. Here, players take on the role of Guts’ fairy partner, who fights the evil Mandragora plants that are trying to invade Guts’ bag. It’s not much of a game, but it is something extra. Beating the game in hard mode gives you access to a stage select and an unlimited ammo option. Although it makes the game incredibly easy, an unlimited amount of hand cannon ammo makes the game extremely fun. The carnage that will follow in your wake using only the hand cannon is simply marvelous.

It is important to note that Sword of the Berserk: Guts’ Rage is not only a game, it’s also a movie. You’ll spend just as much time watching the movie sequences as you will playing the game. These movies are a great vessel for exploring the story line and are simply awesome to watch.

The only problem with this feature is the large amount of time spent between the action. This can get very frustrating for those of you who just want to get on with the carnage. Also, after seeing the movies a time or two, you’ll want to jump right into the action. Skipping the movie sequences, however, still takes a lot of time.

The simplicity of Guts’ Rage actually makes the game more enjoyable,
since you won’t have to play for hours on end to finish it. The problem with
this is the fact that you’ll be left wanting more. While certainly a top-notch
diversion, Berserk would have benefited greatly from more depth.

Above all, Sword of the Berserk: Guts’ Rage is a fun game that lets
you get all your day’s frustrations out. Mindless hack and slash action abounds
to please even the most discriminating barbarian. 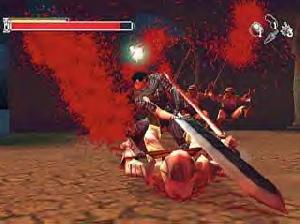