Now if only they could make it 4D…

Three years have passed since I wrote the original Game Revolution review for
Ultima Online. If you are unfamiliar with the
basics of the game, you should go read that review
first. Since that time, there have been dozens of major changes to the game
and three fully-packaged software releases on new CD’s. But oddly enough, I just
went back and re-read that review and it’s amazing how well my original analysis
holds up, even now. Just a few of the details have changed. More on that later…

The one thing that has remained consistent in the online world of Britannia
since the very beginning has been the graphics, but not anymore. Quickly following
the cancellation of Ultima Online 2 (a.k.a.Ultima Worlds Online: Origin),
we get Ultima Online: Third Dawn, the first UO release that attempts
to change the graphics. It also allows access to the new world of Ilshenar.
But most importantly, it’s a UO update that requires an additional purchase
(rather than a patch), and so becomes worthy of review.

The first thing I must emphasize here is that aside from the one new world,
this is the same game as Ultima Online – it just looks a little different.
You play on the same servers with the same people; things just look different
to you than they do to people who are not using the Third Dawn “client.”

It’s a little confusing, so I’ll try to explain it again: In this massively
multiplayer game, you still see the same objects, monsters and characters as
the other players do, at the same time they do, only they look a little different
to you. The virtual world itself has not changed. Have a house? It’s still there.
So is your Axe of Vanquishing. Got it?

The perceptive ones among you will have noticed that I have been calling the
graphics ‘different’ and not ‘better’. The reason for this should be obvious:
they’re not better, they’re just 3D… sort of. Third Dawn retains
the overhead perspective of UO, but has replaced the flat sprites of
most of the animals, characters and monsters with little 3D figures. Oddly though,
many of the objects in the game (and a few of the animals) are still the old
sprites, making for a sort of graphical mishmash.

The big advantage of the new 3D characters is that they move much more smoothly
and are more expressive. The animation during fights and while casting spells
is smoother and more varied. There is even a huge new range of character movements
you can use while just chatting in town, from blowing a kiss and dancing a jig
to armed salutes and emphatic arm-waving while arguing. People without the Third
Dawn client cannot see any of your new expressions, so they are really just
eye candy and have little effect on the game (unless you want to stand around
in the middle of town dancing like an imbecile).

Unfortunately, the new graphics are less distinct than the old 2D ones. It’s
just plain harder to see things like weapons and smaller creatures. Also the
new ‘gumps’ – the Ultima windows that show your inventory and character
info – are more unwieldy. They move slowly and come in much more awkward sizes.

However, the worst part is the brutal slowdown when there are a lot of objects
on the screen. My computer clocks in at far over the minimum system requirements
and it still suffers badly when things get crowded. And in the more intense
moments of Ultima Online, slowdown equals death, because it’s only you
that slows down, not the game. In the persistent world of UO you can’t
reload a saved game, so death equals a big pain in the ass. 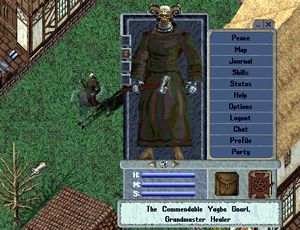 Other
problems abound. People who use ICQ in conjunction with Third Dawn will
be disappointed to find that you can no longer Alt-Tab in and out of the game
to check your ICQ messages. I also encountered a problem where if I logged out
and then back in without quitting Third Dawn entirely (to change characters,
for example), my mouse would get messed up. To cap it all off, the software
crashes fairly frequently during play – especially during combat – dumping you
back to the desktop and making Third Dawn utterly useless for player
vs. player fighting and only marginally useful for regular adventuring.

Which leaves us with the new land of Ilshenar… which is just fine. Since
it is specially designed for the 3D client, it does look better than the 3D
“translated” old worlds. It’s also chock-full of monsters, some old
and several new ones, including new mounts like unicorns and ki-rins. Ilshenar
uses the nicey-nice Trammel rules (UO is now split into two worlds, Trammel
and Felucca, one where players can fight each other and another where they cannot),
so you don’t have to worry about any murderers or thieves lurking around…or
much happening that’s interesting in the multiplayer realm. In fact, in my wanderings
there, I never saw another person.

As you can probably guess by now, I’m not going to be giving Third Dawn
a very good grade. However, I’d like to point out that I’m only grading the
Third Dawn client here – not UO itself, which is a much better
game than the grade below will suggest. If you want to start playing UO,
don’t be afraid of the Third Dawn disk, because it also contains the
regular two-dimensional version of the game.

And oddly enough, UO is still worth playing after all these years.
The faction warfare system finally started up recently, allowing players in
Felucca (the not-so-fluffy world) to join one of four factions and fight for
control of cities. It’s actually breathed new life into the game, which had
become a bit slow after the introduction of the kindly land of Trammel. For
a while, there was hardly anyone in Felucca at all, ruining some of the better
social dynamics of the game.

The game has changed a whole hell of a lot since I wrote that first review
years ago. The near elimination of server lag and fixing most of the ways people
used to be able to cheat have improved the game a lot. But not all the choices
made by the design team have thrilled me. Ah well, you can’t please everyone,
and UO (not in 3D) is still a damn good game.

While preparing for this review, I ran into more than one player online who
had actually removed Third Dawn from their computer and reinstalled the
old client. And frankly, I’m going to do the same thing as soon as I finish
taking screen shots. Then I can get back to battling for control of Britannia
in the name of Minax. All I ask is to be made sheriff of Skara Brae. 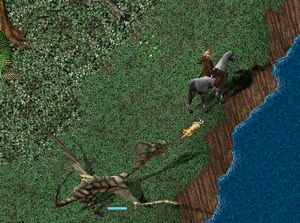 Here are all of the bug fixes and new additions.
News 2 months ago
6

So close, no matter how far.
Games 2 months ago
7

Now is the winter of our discontent.
3 months ago
9