Once upon a time, in days of yore, games like Bard’s Tale and Wizardry
were the marvels of the RPG world. They were engrossing and astonishing, but in
the end, too primitive to tear us away from playing Dungeons and Dragons
with the original dice, paper, pens, friends and a case of Mountain Dew. I sometimes
played a barbarian fighter named “Bonk the Noncommittal” and my warcry would thunder
across the table: “Bonk smash!! Maybe. Maybe not! Bonk not sure!”

Today we expect far more from our computer games. New graphics, sound, and
complexity have drawn people into worlds like Baldur’s
Gate and Everquest and away from the classic
rolling of the dice, and my nerdy shouting.

The designer of Wizards and Warriors, D.W. Bradley, comes from those
hallowed halls of gaming. In fact, he was the designer of some of the original
Wizardry games. So it comes as no surprise that Wizards and Warriors
feels like those classics. Too much like them, unfortunately. While the game
has a few modern trappings, the gameplay is straight out of 1985, leaving me
frustrated and disappointed.

The land is in peril! At least according to the dreams of crazy old coot and village elder, Gareth. Fortunately, you believe him, or the game would go nowhere. You are… nobody. Six nobody’s actually, all of whom you create from scratch. Gareth’s dreams are quite precise about what should be done, and so he orders you off to the graveyard to retrieve the Maven Sword, the land’s only hope.

You have a fair bit of leeway in creating your six adventurers. You have all the standard classes (fighter, thief, magic-user, etc…) and some fanciful races. On top of the regular humans, elves and dwarves, you can also choose from many species like the ratlings (rat-like), whiskahs (cat-like, not cat food), lizzords (you can figure it out), and the elephantine oomphaz. Also, you can receive training later in the game to become higher level classes like bards, ninjas and paladins.

Of course, all these choices would have been more appealing to me if I could
have actually seen my characters during the game. This is a first-person
game, so you can only see your party in action if you find a mirror, and there
are no mirrors. For a first-person 3D game, the graphics are solid with
a nice terrain engine, but it’s no Quake
3 polygonal marvel.

This perspective, however, is one of the game’s largest flaws. Other first-person
RPGs like Daggerfall, Everquest or King’s
Field put you in the role of one hero. However, in Wizards and Warriors
you have 6 people using one perspective, which is awkward at best. During combat,
for example, each character in your party sort of ‘takes turns’ using the window,
which is not only strange, but frustrating. If you want to be close enough to
a monster to hit it with a sword, it means your archers or mages are right there
at the front line as well. Dumb. On top of that, it just feels wrong,
oddly schizophrenic. 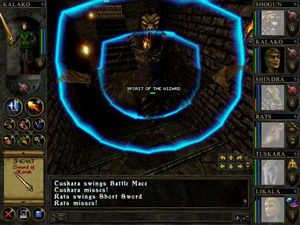 The
interface is poorly designed to boot. Navigating the menu system just to buy
or sell a sword is a tedious process. Plus, half the time you try to buy something
it says you don’t have enough gold. Why? Because the gold is on one of your
other characters instead of the ‘currently active’ one. Argh. You either have
to switch the active character, or use the arcane ‘pool gold’ button, which
is fine until you try to buy something with another character. I haven’t seen
a ‘pool gold’ button since 1988.

Using the interface to do anything else is an equal pain in the neck, from switching weapons to casting a spell. Just figuring out how to talk to someone who didn’t initiate the conversation took me ages.

However, once you start talking, you will encounter one of the few pleasant surprises of the game. The voice acting is really well done, the music is minimal (a good thing in a game that will take you 40 hours or more to play) and the plot is well written and engrossing. The unfolding story, as told by the well-voiced characters, is simply a pleasure. Many characters are even willing to go on at length about inane subjects such as their home town or rat pie, leaving you chuckling. A nice touch.

It’s really a shame that the immersive quest is made frustrating and tedious
by the lousy interface, ‘features’ I thought we had left behind years ago, and
the bizarre singular/multiple point of view. Wizards and Warriors may
have a fine pedigree, but it’s the runt of the litter. As Bonk once might have
shouted, “Game not very good! Get C! Probably. Not Sure!!” 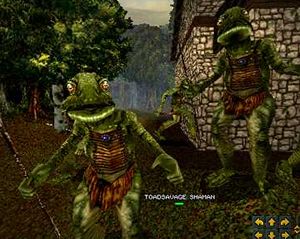 Somebody get me a beer.