“Gee mommy! Does that mean I can kick my friend in the nuts, too?” Review

“Gee mommy! Does that mean I can kick my friend in the nuts, too?”

Psygnosis has always been an interesting company. It has, in its past, come
out with some groundbreaking original concepts… and then they’re either done
to death, recreated all wrong, or followed by some frighteningly embarrassing
game. Lemmings, Colony Wars, and Wipeout
are among their brightest games, but then turnthey around and release Blast
Radius, Rosco
McQueen, and Spice
Wor . . . hold on, we deny that game even exists!

Thankfully,
this is not one of those God-awful signs of the apocalypse. Rollcage,
while it seems like Wipeout with walls and wheels at first, takes the
concept of futuristic racing in a different direction. It was created by another
development team that tried to push away from Wipeout, but some of those
positive influences did make it in. The result is another vision of future racing
that is almost as impressive.

Graphically, the game zips. You really feel like you’re hitting those 400 plus
mph speeds with its silky smooth frame rate and all that artistic detail. There
are the trails of smoke from your missiles as they whiz by and smack into the
vehicle that just cut you off. Sweet revenge! The explosions fill the screen,
and of minor note, in a snow stage, your tires will get snow packed in them.
Nice little details.

Rollcage has music by, most notably, Fatboy Slims, as well as some other
techno mixers and independents. I felt that the music was at first an over-hyped
aspect of the game, but the more I played, the more I liked it. One song got
stuck in my head (incidentally, the Fatboy Slims’ entry), and the rest range
from good to tolerable.

Each car has a slightly different feel, based on the performance ratings. However,
the cars all look really similar, just with different color schemes. How much
variation can you expect to get out of vehicles with oversized wheels? One minor
gripe is that when two players select the same car, there is no color differentiation
to tell the two apart.

It takes time to master these vehicles–because they can drive on the walls
and ceilings, so you can sometimes have a problem with flipping. Sometimes when
you try to drive on the walls, you can easily over steer and end up looping
in circles. There’s a “drive the right direction” button that redirects your
car to go the right way; it takes getting use to, and the process of correcting
yourself seems to take too long. However, once you’ve got the hang of it, it
feels really natural. 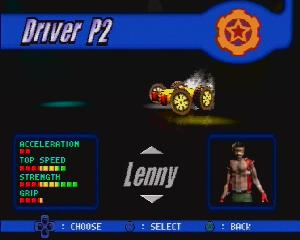 There
are 4 different kinds of terrain with 20 racetracks spread throughout them.
Some of the levels feel way too short. And then there are levels that you don’
t know where you’re supposed to go. This can get frustrating when you’re playing
a 2-player game and you don’t have a computer opponent to follow. Like the controls,
you also have to get to know the tracks.

Weapons wise, the game works like Mario Kart
with pumped up weapons. You collect orbs that are randomly either offensive
or defensive. These power ups are standard issue, including lock on missiles,
shields, and speed boosts. There are also some standouts like the ice ray that
creates a frictionless surface in front of you and the hallucinogen that puts
the screen on an acid trip, letting you go faster than everyone else.

Ever since Street Fighter 2, it seems like developers are compelled
to create world tournaments and characters. If it’s not appropriate to the game,
don’t even put it in! The characters that you play look very sad, like some
chimp-human inbreeding experiment, and if you take the trouble to read the instruction
book (don’t waste that time), you’ll get one lousy ass story. Just forget about
the story, block those characters out of your mind, and get racing!

As a brief social commentary, another reason I didn’t like the characters was
that too many of them seemed to be designed around racial stereotypes. For example,
the pathetic and somewhat racist opening movie. Duuude, that’s just wrong! Wrong
in what it says about people, wrong to susceptible 3rd graders, and wrong in
that it has nothing to do with the game.

Perhaps in the future we will drive crazy vehicles like these. Maybe we’ll
also live in high rise space needles like the Jetson’s, filled with exotic alien
women, and be playing the Playstation 3000. Hell, who knows what the future
may bring… but Psygnosis’ future will be set and secured if it can only keep
its credibility up by sticking to quality games like Rollcage. Just please…
please leave the racial groin kicking out.

A holy reunion?
Games 6 months ago
9

Forza kicks it up a gear.
Games 1 year ago