When Apollo Justice: Ace Attorney originally released almost 10 years ago, I wasn’t initially sure what to think of the game. The previous game had put a perfect end to the trilogy, but suddenly we had a new entry that didn’t have you playing as titular character Phoenix Wright.

The more moody color scheme, serious story, and new – very loud – protagonist signaled a major departure for the series. However, by the time the credits had rolled, I had fallen in love and it remains to this day my favorite game in the entire Ace Attorney series. However, my initial uncertainty back then as to why the fourth game even existed perfectly sums up my feelings about this Apollo Justice remaster.

Apollo Justice: Ace Attorney follows – surprise, surprise – rookie attorney Apollo as he attempts to make his name in the legal realm, much like his predecessor Phoenix Wright. Apollo Justice takes place several years after the events of the previous game Trials and Tribulations, showing us a corrupted courtroom where false evidence and testimony is rampant.

Though it is the start of a new trilogy and take on the original storyline, there are only a couple of returning characters who have all changed drastically since we last saw them. In fact, Apollo Justice feels very much like the black sheep of the series. Even the subsequent games wouldn’t capture the same darker, more serious atmosphere of this game. 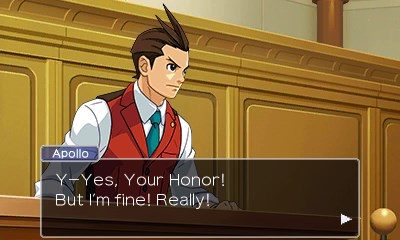 Regardless, gameplay is just what you’d expect. An incident occurs, you investigate it by gathering clues and testimony, and then take it back to the courtroom. In the courtroom, you cross-examine various witnesses by presenting the evidence you’ve gathered to prove your client’s innocence and find the true culprit in the process.

Apollo Justice adds to that core gameplay with a few extra interactive elements. During investigations, you’ll occasionally be tasked with assisting Detective Ema Skye by using the touchscreen or microphone to dust for fingerprints and the like. Also, Apollo’s own unique quirk is his ability to tell when someone is lying, requiring you to carefully watch a person for notable ticks or reactions.

What’s disappointing about this remaster is how little has been changed or added to the 3DS version of Apollo Justice: Ace Attorney. The gameplay is relatively the same, meaning you will still have those moments where you’re unsure of the correct answer and have to resort to trial-and-error. Thankfully, this is offset by the ability to now skip text and easily retry a section if you fail it.

Beyond that, though, the differences in the remaster are pretty scarce. The only other real changes are visually and audibly, as you would expect from an improved port. The soundtrack has been enhanced, removing the noticeably compressed sound of the original DS version and improving upon what was already one of the greatest video game soundtracks.

Unfortunately, that improvement isn’t as apparent on the graphical side of Apollo Justice. It has been upgraded to a higher resolution, resulting in sharper outlines, and less jagged and blurry edges of characters and backgrounds. However, the difference is pretty mute, resulting in the 3DS version not providing much at all for anyone that hasn’t already played this before. 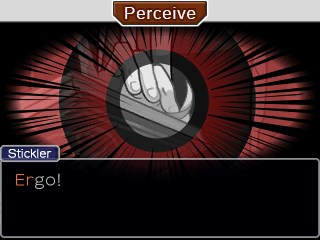 Much like my thoughts on the Ace Attorney Trilogy on 3DS, it would’ve been best to rework Apollo Justice with the same 3D character designs and voice acting that were used in the last two games in the series. At least the trilogy comes with great bang-for-your-buck, but Apollo Justice doesn’t have that.

When the first three games came to the West on DS, there were a lot of changes to the Game Boy Advance versions to make the games feel and work wonders on the DS’ separate screens. Apollo Justice lacks that care and love, feeling like an excuse to be able to say that all six games are now available directly on 3DS when you can already play the original DS version through backwards compatibility.

This is made even more unfortunate considering there are several Ace Attorney games that have yet to be localized in the West like Ace Attorney Investigations 2 and The Great Ace Attorney. For newcomers that haven’t experienced Apollo Justice, there’s no reason not to try it on 3DS, but for veterans like myself, this 3DS remaster gives you no real reason to come back to it. 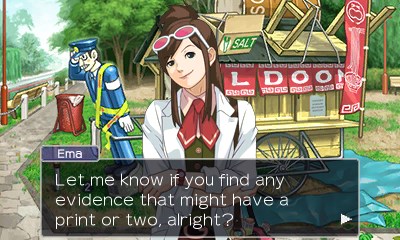 Even though Apollo Justice: Ace Attorney is my favorite game in the series, it’s hard to recommend this remaster to anyone other than newcomers. Being that it is already available on mobile devices – as well as through backwards compatibility – and does little to change or add anything to the original game, it is a missed opportunity to enhance the game with the same graphics as the most recent Ace Attorney entries.

However, for those that have never tried this fourth Ace Attorney game, there is no reason not to pick up Apollo Justice. The riveting story is much more serious and emotional, the cases will shock and surprise you, and the soundtrack and cast of characters new and old are absolutely unforgettable.

Some have aged gracefully, others have not.
Originals 4 years ago

Nintendo needs to rethink its multiplayer releases.
Originals 4 years ago

Do you have any objections?
Originals 4 years ago