The answer lies at the heart of the joystick.

[Editor’s Note: This review is for both the Tournament Edition and standard Fight Stick, only the grades and the report cards differ.]

Opening the door to your house, lounging back on your favorite chair or spot on the couch, and lazily wrapping your hands around the controller or mouse, you might forget that the console is a luxury when you consider the origin of video games: the arcade. (Yes, they still exist… and I’m not just talking about the ones with skeeball.) Most genres have evolved fully onto the console, were created for the console, or simply developed during the console era, but the fighting genre is a rare exception.

It’s not a genre that needs a peripheral, per se, in the same way that you really need a dance pad for Dance Dance Revolution and two guitars, drums, and microphone for Rock Band. You could use the D-pad on a standard console controller for a fighting title and not be looked at with a suspicious squinty eye, just like you could play most rail shooters like House of the Dead without the light gun peripheral. Then again, you can’t help but feel like something is missing, like a Ryu impersonator without a headband (or a gigantic fan to make it flap in the wind).

The D-pad, whether it’s on the PS3 and especially the Xbox 360 controllers, doesn’t have enough precision to perform the circular and charge moves in Street Fighter IV with complete accuracy. Just having one shoryuken turn into a hadoken – and thus have the opponent land a jump kick, crouch kick, hurricane kick combination on you – due to the slippery controls is enough to make you to chop your controller in half.

The Mad Catz (or MadCatz) Street Fighter IV Fight Stick (or FightStick… what’s happening to spaces?) aims to fix all that, whether it’s the standard Fight Stick ($70 for the PS3 and $80 for the Xbox 360) or the special Tournament Edition Fight Stick ($150). Regardless of the model, the Fight Stick aims to supplant the popular Hori EX 2 stick as the peripheral of choice, and in that regard, it manages to compete with it on the same level – which is surprising, given Mad Catz’s unfortunate reputation as a hit-or-miss, mediocre-at-best hardware manufacturer.

This time around, your opinion of this Mad Catz product depends on your inhibitions on the Japanese arcade layout and style for fighting games. Some of you might be scratching your head over the differences between the American and Japanese styles of arcades, so let me break it down for you. Generally, the Japanese joystick is shaped like a lollipop or a spherical doorknob, instead of the baseball bat-shaped rod that American sticks use, and the buttons are incredibly light and sensitive, compared to the stiffer American buttons that have a bit more force feedback.

Both joysticks also use the Japanese-styled square gate, which in lamen terms means that the groove the joystick moves in is less circular and more cornered like an octagon. This means that you can find the diagonals on the joystick much more easily, but doing Zangief’s 360-degree throw feels like you’re changing gears on a flimsy stick shift. I wish Mad Catz could have catered to both the Japanese and American crowds by offering two different styles of sticks or replaceable parts, though you can order and mod the stick with a Sanwa Bat Top and Sanwa Joystick Adapter (however, that costs more money and voids your warranty since you have to open the plastic chassis).

But since the sticks are designed after the actual Street Fighter IV arcade cabinet, apart from a few special features, it’s hard to complain too much. The buttons and decals match the arcade cabinet’s red, white, and black color palette, with the basic edition in a fresh white and the Tournament Edition in a crimson red. The layout of the buttons are also identical, excluding the two black face buttons and the two start and select/back buttons along the back of the case. 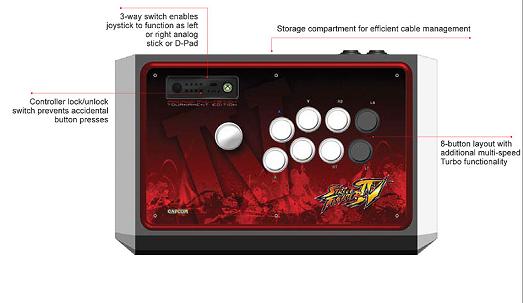 In the top-left corner is a box with the Xbox 360/PS3 button, a turbo feature for each of the six primay face buttons, a toggle to switch the stick between different genres of games (say, for twitch titles like Pac-Man), and a locking device that prevents you from accidentally pressing any of the buttons within the box. There’s also a handy headphone jack at the front of the case, and the case angles downward towards you, so that you can rest your hands comfortably on the sloped front. Best of all, both sticks are just heavy enough, with a metal and plastic frame and rubber legs, that they won’t be moving around whether they’re on your lap or table.

The vast majority of players won’t mind the extra features and tweaks, but purists will likely cry foul over the crutches that don’t belong on a professional "Tournament"-styled joystick. The turbo feature allows players to get in several light hits in a combo with very little effort and the two additional face buttons means players can use them as shortcuts for simultaneous button presses – two things that can’t be done on the official SFIV arcade cabinet. The start and select/back buttons being on the back makes sense as a preventative measure, since pressing either of them is an instant disqualification in actual tournaments, but their placement is still irritating when you what to skip cut-scenes and they’re not included in the lock feature. It would have been better if Mad Catz and Capcom found a way to make sure that ranked online matches have shortcut keys and the turbo feature disabled for all controllers (at least the "official" ones).

The differences between the basic and Tournament Edition Fight Sticks are minimal, at least to the naked eye, but Capcom made sure to send some love to owners of the Tournament Edition Fight Stick, duly noted by their seal of approval on the carrying box. Apart from being slightly wider and heavier (6.5 pounds), it has a Sanwa joystick and buttons (which last much, much longer than standard buttons) and has a compartment for the four-meter USB cord. On that note, it would have been nice if the fight stick was also wireless (look, even with the possible lag, if Guitar Hero and Rock Band instruments can be near-flawlessly responsive, then there shouldn’t too much of a problem). The artwork is a decal fused on the bottom of an acrylic sheet, as opposed to the basic fight stick which has its decal on a metal plate, so it’s more easily replaceable.

That might not be enough for casual fans to upgrade from the standard model, but to you thrifty spenders, a word of caution: The regular edition stick has been reported to have a design defect that damages the stick. The washer at the bottom of the joystick has been alleged to cause the locking of the joystick in certain places and the wearing away of the protective covering over the microswitches.

A peripheral that costs more than the actual game, Mad Catz Street Fighter IV Fight Stick may not be the best investment in this troubled economy. But if you want to get the full real Street Fighter IV experience and you don’t already have the Hori EX 2 stick, the basic model is respectable enough to be a worthwhile purchase. Likewise, the top-of-the-line Tournament Edition model is in line with the best fight sticks on the market, though unless you’ve pre-ordered one months in advance, you likely won’t find one until early April (or much, much later). The only good news is that by the time they are restocked, your thumb  will have likely made you curse the D-pad enough times that you will want something – anything -better.

Approved by Shroud.
Tech 1 year ago
9

Worth the upgrade price?
Games 1 year ago