What do you think of when you see the name SNK? The numerous fighting games that sparked a rivalry with Capcom? Its expensive arcade perfect home console? The numerous games that litter the Switch eShop each week? Whatever your thoughts jump to, it’s a part of a long legacy for an important gaming brand. To celebrate 40 years of SNK (as well as their revival from the world of pachinko), Digital Eclipse has done what they do best. Even though you probably won’t even know many of these games, SNK 40TH ANNIVERSARY COLLECTION is an outstanding compilation filled with some of the company’s earliest foundations.

While many retrospectives look back at SNK’s fighting game legacy, 40th Anniversary Collection brings more obscure games to the table. Before the era of King of Fighters, SNK made its name on scrolling shooters. Its first breakout hit was Vanguard, a genre-defining 1981 space game that pioneered moving and shooting in different directions. This style of play would become the company’s bread and butter all the way until its coveted fighting game days. With this collection, you can start at Vanguard and see that progress firsthand, albeit in a somewhat abbreviated fashion.

As of now, the collection consists of 13 titles ranging from the Ikari Warriors trilogy to Athena and Psycho Soldier. An additional 11 games will join the fray via a free patch in December. Not only do you get arcade perfect recreations of each title (in both American and Japanese versions), but you also get a console representation if the game ever made it home. Most of these are NES translations, so they haven’t aged great, but it’s not about playability. Digital Eclipse does an amazing job in striking a balance between making older games playable to a newer audience and preserving obscure minutia that only the most obsessive would care about. It’s always impressive to see.

Each game plays just as you’d expect, even if that’s not how they originally played in arcades. Digital Eclipse made the conscious decision to make each game’s control scheme more sensible in a modern context. Mapping a set of four fire buttons in Vanguard to the right stick is what you’d expect. Some games came with arcade-specific controls that would be impossible to duplicate on Switch, so this all makes sense. I just wish that these changes were documented somewhere. Photography of the original cabinet or some sort of notes going over the original controls would be helpful if you want to preserve each game’s original difficulty. Of course, you can also rewind at any time with the press of a button, so it’s hard to do that anyway. 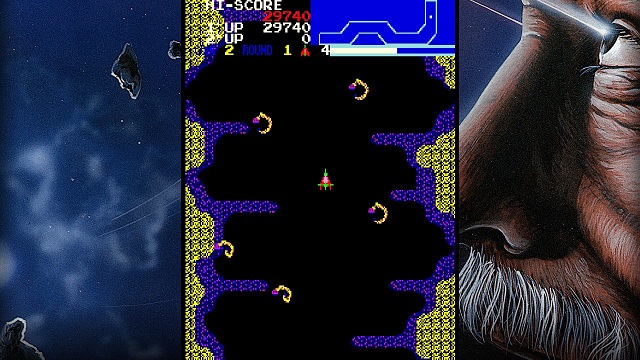 The games, however, might turn some folks off. Every title here came out between 1979 and 1990. This was the era of Pac-Man, not the era of Street Fighter, and we’ve come a long way. A lot of players are going to find it difficult to go back to these games unless they’re in it for the history as well as enjoyment. That being said, if you do find it fascinating to see some of the origins of control schemes and features we take for granted today, you’ll easily get your money’s worth.

P.O.W. holds up as a brawler, especially considering its vintage roots. It’s amazing to see a game of this type with realistic attacks and a gun that clears mooks in one shot. Arcade platformers are always a weird proposition, but Athena‘s focus on exploration and power-ups makes it more enjoyable than its time period might let on. It’s the rare coin-op that has alternate paths and warp zones, which made more sense in the NES port. Finally, Street Smart probably isn’t a good game by any stretch, but it is SNK’s first fighting game. Seeing the seeds of King of Fighters in a game featuring such characters as Karate Man and Wrestler puts SNK’s history into perspective.

SNK 40th Anniversary Collection Review – It Belongs in a Museum 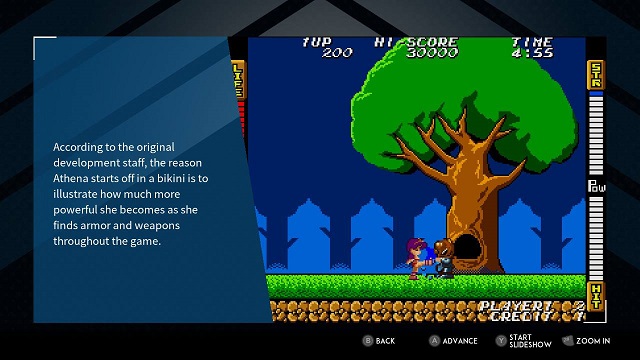 It’s clear that the developers are presenting this as a museum piece, and it succeeds in that way. There’s a lengthy timeline with details about a whole host of SNK games, including titles not in the collection. There’s art, original arcade flyers, and more all in easily readable high resolution. However, you can’t easily access the history about each game before you play them. Arcade and Museum live in their own separate menus. Because of this, you have to seek out the historical context for each title yourself. Both sides of the package should have intermingled more.

Other than the historical slideshows, SNK 40th Anniversary Collection also features the ultimate sound test. Each cabinet breaks out into a complete soundtrack that includes background music, Game Over stings and everything in between. You can shuffle songs for each game or just play them on loop. Some games like Athena even feature unused tracks from the ROM. The only thing that could make it better is the ability to play the music while the Switch is powered down in your bag à la Smash Ultimate. Maybe next time.

Its treatment of the soundtrack and sound effects is evident of the grander attitude toward the SNK 40th Anniversary Collection. It shows how much care and thought went into every corner of it. Including a seamless vertical view that takes advantage of the Switch’s portability to see these games as they were originally presented is a thoughtful nod. Putting games like Munch Mobile or Sauske vs. Commander sit right alongside more palatable options shows its devotion to its past. Even the added screen filters may only please a small minority of the emulation scene, but they’re worth it for preservation’s sake. This all comes from a passion to keep as much this industry’s history alive as possible, and it all shines through in the final product.

SNK 40th Anniversary Collection was reviewed on Nintendo Switch with a copy provided by the publisher.

A rich variety of games. Arcade perfect ports for everyone. An expansive collection of extras. Rewind saps away some of…
Friday

A rich variety of games. Arcade perfect ports for everyone. An expansive collection of extras. Rewind saps away some of…
February 10

A rich variety of games. Arcade perfect ports for everyone. An expansive collection of extras. Rewind saps away some of…
February 21

A rich variety of games. Arcade perfect ports for everyone. An expansive collection of extras. Rewind saps away some of…
February 24

Genre-defining experiences, even a decade later and despite Sega's paltry improvements.
Games 3 years ago

I've got your six!
Originals 3 years ago

Paying a visit to some old friends.
Originals 3 years ago

August is a hotter month than you may think.
Originals 3 years ago