The Ace Attorney series has had a weird path to stardom. The original trilogy was released for Game Boy Advance to critical acclaim yet never found its way overseas. Instead, Western players were introduced to the series for the first time on Nintendo DS in 2005. Since then, the series has found a sizable niche that has led to most, but not all, of the games being released worldwide. Fast forward to the present and Capcom is looking to have the original trilogy capture even more hearts as they have put the high definition remastered versions of the games on home consoles in the Phoenix Wright: Ace Attorney Trilogy. And despite its age, these games are still a unique delight and sit at the apex of adventure games.

While this trilogy isn’t the first time the series has made its way to consoles, as the same games were ported to Nintendo Wii, it’s certainly the most high-profile release. It includes the original game (alongside the fifth case that was created specifically for the Nintendo DS port) and its two sequels, Justice for All and the fantastic Trials and Tribulations. Sadly, there are no sort of extras to speak of but the titles themselves are valuable enough.

The biggest difference between the Game Boy Advance originals and this remastered trilogy is its overhauled visuals. It uses the same smoothed look that the iOS re-releases saw earlier this decade. While the resolution is impressive, there has always been a debate as to if they top the pixelated look of the original since the animation was top-notch and full of charm. While nostalgia isn’t always worth romanticizing, there is a part of the artistry that is missing in this overly clean look. However, it does look best on an HD display and the originals still exist, so it’s not as if this is some heinous decision. 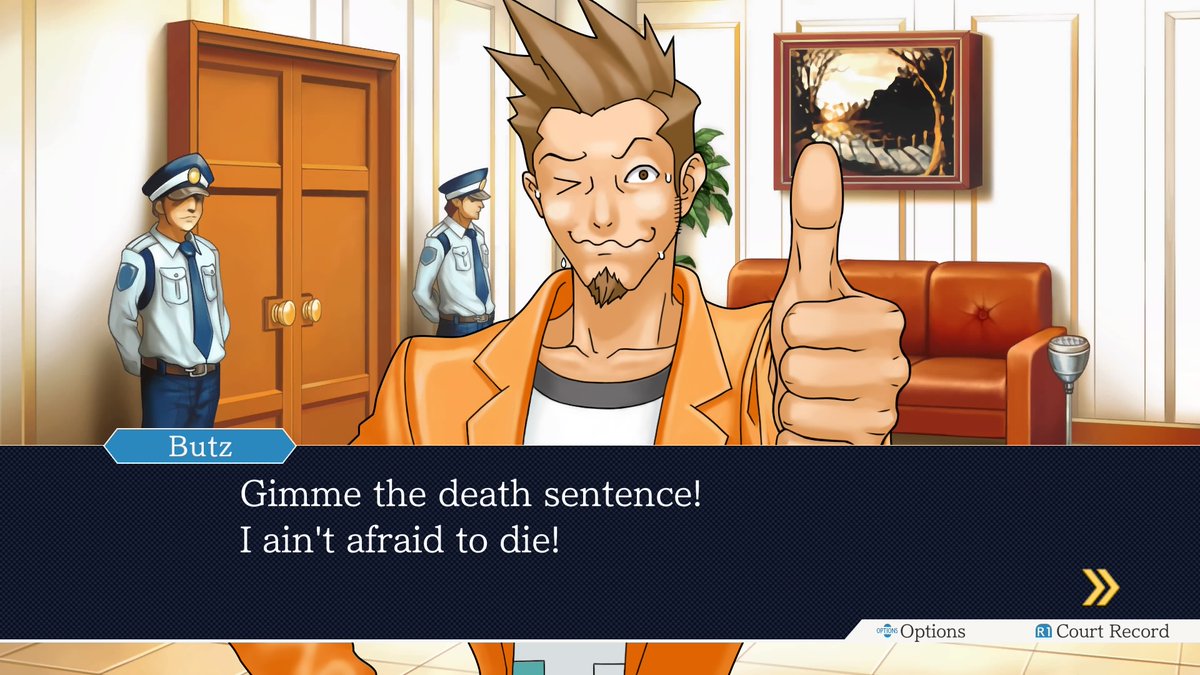 A lot of the action in Ace Attorney takes place within the courtroom as series protagonist Phoenix Wright has to take on a series of powerful prosecutors that all have a grudge against him and are willing to bend the rules to get a guilty verdict. The odds are almost always stacked against him, and that’s why players have to use their wits in order to carefully cross-examine witnesses and use evidence to point out any discrepancies that they see.

Beyond each game’s introduction case, which is generally a short trial that sees the truth revealed in a single courtroom battle, every case takes place over a span of three days. Time is split between combing over the crime scenes in order to gain new information and then using it in court to argue for your client’s innocence. Those looking for a realistic look at the court system won’t get one here, but Ace Attorney always stays true to its in-universe rules. The sequels also add in some layers of nuance that makes investigating just as fun as battling in court.

However, Ace Attorney‘s truly incredible writing stands out in each game in the trilogy. Every case not only has an interesting selection of twists and turns, but its dialogue is the linchpin that holds the whole experience together. Filled with puns and genuinely hilarious characters, every case winds up being memorable because of the script. The three games even have an overarching story that concludes in an explosive final case that doesn’t just add new depth to existing characters but also crafts a mystery that even Gosho Aoyama would have trouble solving.

While it’s more of a visual experience, it does have some mechanics that see the player looking at evidence in order to help their case. There’s no shortage of seemingly uncrackable alibis and damning evidence that the player has to somehow use to their advantage and it’s what makes Ace Attorney so gripping in a way most other games aren’t. You have to critically think about the scenarios as you gather clues, which is refreshing since most adventure games now are more passive, narrative experiences. 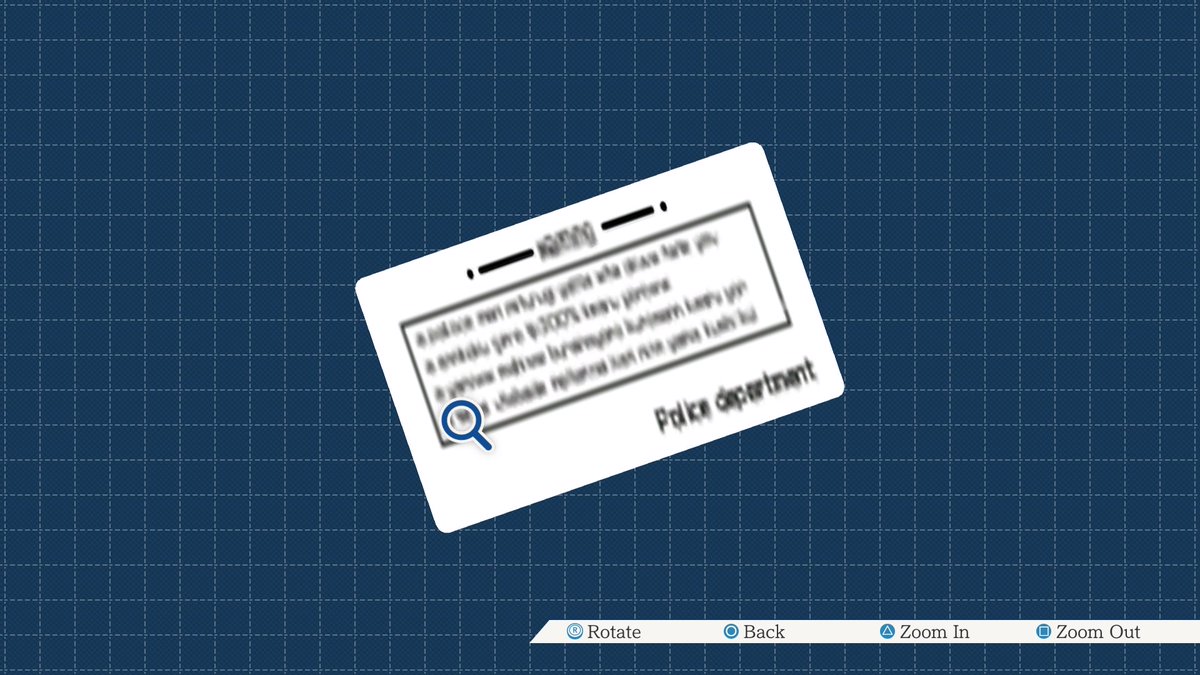 Unlike a lot of visual novels and adventure games, Capcom didn’t implement a boring trophy list for Ace Attorney Trilogy. Unlike many of Telltale’s titles, simply playing through the story won’t net you a Platinum trophy. Instead, players are rewarded for going out of their way to unlock some of the funniest dialogue exchanges (such as the running gag about the differences between ladders and step ladders). Not only does it encourage players to replay cases if they missed some, but it led to me seeing some scenes I had missed before despite having played the original trilogy many times. It’s these little touches that make the trilogy feel like a love letter to the series rather than just a compilation cash-in.

However, there are a few things that could have been improved upon with the remastered version like the lack of a text log, which sticks out like a sore thumb. While that was a limitation from the original releases, adding one so players could reread dialogue they missed would have been a meaningful addition. Despite originally being released on Game Boy Advance, there are other issues that arise from the games being released on a system without a touch screen.

Examining locations don’t feel quite as fast as before and looking at items in the 3D view (which is only done in the fifth case of the first title) is an awkward experience not unlike playing the PS4 port of 999: Nine Hours, Nine Persons, Nine Doors. While the situation isn’t optimal, Capcom did do its best to make it easy enough to navigate and it never truly gets in the way of enjoying the story. It just gets in the way of the gameplay in rare and small instances.

Despite a few quibbles that most new players won’t even notice, Phoenix Wright: Ace Attorney Trilogy is an impressive remastering of three of the greatest adventure games ever made. Not only do individual cases come to a satisfying end, but each game ties the individual stories together to create an even richer experience that will leave players in awe. Getting the original trilogy in a single package is not just a great value, but also fitting since it includes all of creator Shu Takumi’s original work on the series. Hopefully, the rest of the franchise and its various spin-offs will make their way to a wider audience next, but this is a great start.

GameRevolution reviewed Phoenix Wright: Ace Attorney Trilogy on PS4 with a copy purchased by the reviewer.