All Punishment and no Sin.

I first encountered Treasure when I played Gunstar Heroes, which I always thought of as the Japanese version of Contra, except… you know, Contra was developed by Konami so that doesn't really mean anything. I hadn't played another Tresure game until Mischief Makers on the Nintendo 64, followed by Sin & Punishment on Nintendo's Virtual Console and Sin & Punishment: Star Successor on the Wii. What I'm getting at is that I'm used to Treasure's brand of difficulty, a challenge level known to break controllers and men alike.

I was prepared for that. I even walked away from my Bangai-O HD: Missile Fury GDC preview appointment with a smile on my face, like visiting with an old friend. Unfortunately, seeing that friend in my home again and busting up all the furniture has really soured the relationship.

Bangai-O HD: Missile Fury is a downloadable title developed by Treasure for Xbox Live Arcade. You pilot a mech with different weapons and special attacks at your disposal. That's about all the plot there is. Missile Fury's narative retains the threadbare nature of Treasure's past titles, as well as the difficult, insane, shoot-em-up action. Unfortunately, there's a huge misstep in Bangai-O HD's structure that prevents it from being another amazing title in the development studio's catalog.

Gunstar Heroes, Mischief Makers, and Sin & Punishment all presented the player with a sequence of levels that allowed for a slow burn difficulty. By the end, white knuckles and sweaty palms were par for the course, but each of those games got there gradually, teaching the player the ins and outs of the game's mechanics and creating a rhythm through which the player could understand what to expect in the upcoming challenges.

Bangai-O HD does away with all that. Instead, you'll be failing relentlessly in most of the game's levels with no perceived reason why. Occasionally, a level will kill you outright without the presentation of a chance or even fair warning. Part of this has to do with the variation between levels, which quite honestly is amazing. 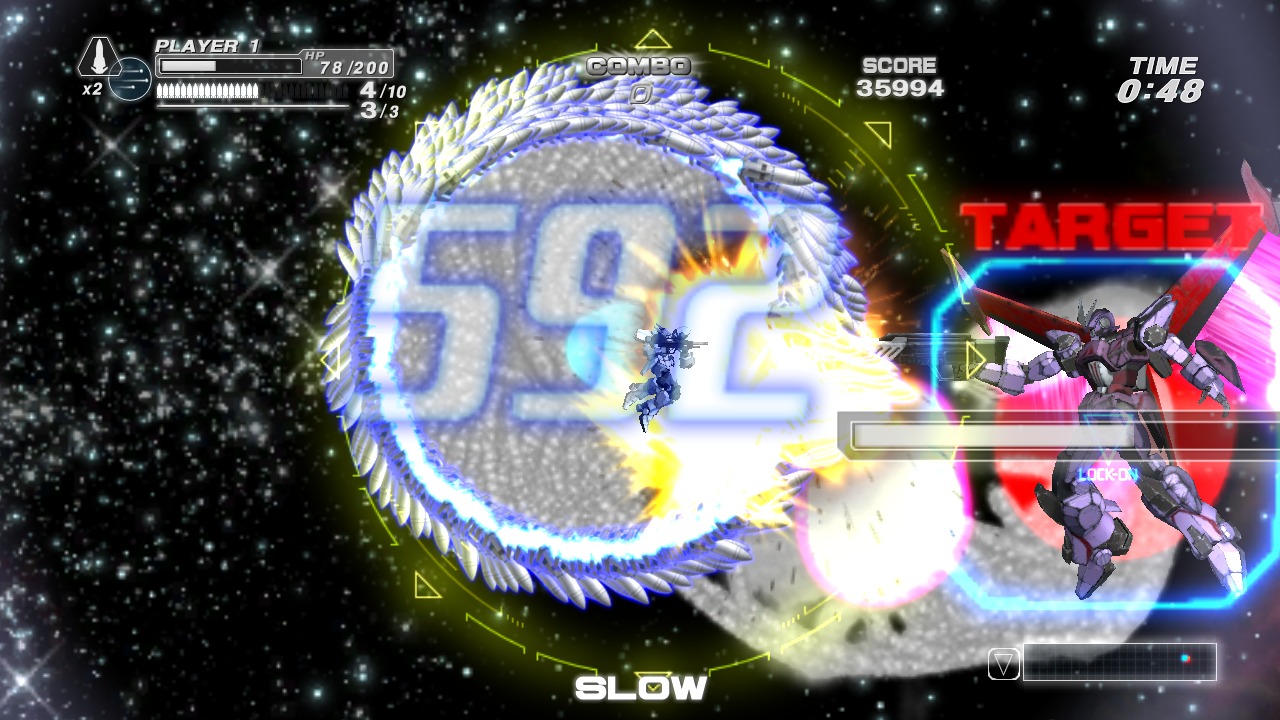 One level will task players with a maze-like structure and a set time by which they'll have to clear out every enemy. Another just pits the player against a boss, plain and simple. Still another has you hitting soccer balls at enemies that remain impervious to your missiles and lasers. Yup, soccer balls are their only weakness.

As much as I love those oddities and Treasure's brand of absurd humor (the text before one level simply states "Beware of Ninjas"), they've definitely ruined that classic charm with the way players are just forced to fail. Unless you absolutely refuse to move on before achieving victory, you can't technically get stuck on any one level. After three failures, players can progress to the next level. The idea is that you'll play through the game, hopefully learn something on your way, and make your way back to finish the challenges you failed.

Don't head back. Don't even take the first step. Only if you're a diehard Treasure fan should you consider Bangai-O HD: Missile Fury. Of course, it's got everything we've come to know and love in shoot-em-up fare from the far east, but if your response to my opening paragraph was "Gunstar Sinners Mischief whozeewhatzit?!" then stay away. Even the most diehard fans may decide that this Bangai-O whatchamacallit isn't for them.

Classic Treasure action Levels range from odd to absurd Levels designed to make you fail ... and organized so that…
Friday

Classic Treasure action Levels range from odd to absurd Levels designed to make you fail ... and organized so that…
February 10

Classic Treasure action Levels range from odd to absurd Levels designed to make you fail ... and organized so that…
February 21

Classic Treasure action Levels range from odd to absurd Levels designed to make you fail ... and organized so that…
February 24

Stardew Valley – Where to Find All Villager NPCs

One of Stardew Valley's first quests sends you out on a mission to meet everyone in town. While it sounds…
7 years ago

The latest update for Elden Ring is out now and the full patch notes for version 1.04 are available.
News 10 months ago
9

Light up the night.
Games 2 years ago
9

A monster mash for the ages.
Games 2 years ago