If you grew up playing The Incredible Machine in your elementary school's computer lab, you were missing out on the clearly superior “Toon” version, which totally left my eyes bloodshot anytime I sat down to play it as a wee lad due to its psychotic art direction. Aside from that, though, Crazy Machines Elements will immediately feel familiar to you as an update to this formula. The concept involves elaborate chain-reaction puzzles that have had some of their pieces plucked out, leaving the player tasked with placing various objects in the correct locations in order to see the 'machine' play itself out completely.

What this particular edition brings to the table is an emphasis on 'elements' of nature to fuel the machines. Clouds, wind, rain, fire, electricity—there are various devices that will produce or utilize these elements that are often vital to accomplishing goals, like moving a toy truck from the right to the left or setting off a firework.

There's no story here; the objectives don't have any rhyme or reason to them other than to serve as the specific condition that solves a puzzle. While the real reward here is the satisfaction of figuring the puzzles out, it's a shame there's no cohesive personality. Aside from an Einstein-like guy in a lab coat who dishes out hints during loading screens, it's just a collection of odds and ends. While it is admittedly very cheesy, at least The Incredible Toon Machine had some life to it.

The game's visuals and audio combine to create something like an allergy medicine commercial. Granted, this isn't a true sequel to the franchise so much as one clearly inspired by it, but that's all the more reason to make some stylistic choices to differentiate itself.

While it's lacking energy in presentation, Crazy Machines Elements is nothing to scoff at in terms of its challenge and value. Dozens upon dozens of puzzles await, and while some may be figured out in a matter of a minute or two, others may take a good while to process. Mileage will vary depending on how well you adapt to this brand of mechanical logic, but there's certainly enough content to keep players engaged for a long while for a downloadable title, including user-generated content and a Challenge Mode (which we'll get back to in a bit). 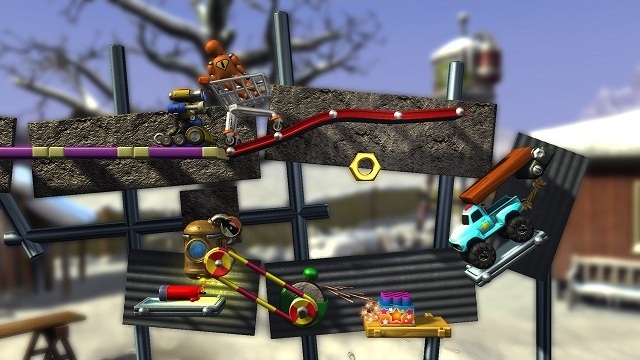 Given the focus on the 'elements', it's a shame that it takes as long as it does for them to be introduced. Sure, it makes sense to ease players in, but the first twenty levels are nothing more than a drawn-out tutorial on the physics, and even when elements are introduced, the pacing is too slow. It can very easily crawl to a stop, especially when players get stuck. While this can certainly be a good thing, the problem is that the game doesn't allow much leeway.

Puzzles are broken into segments of ten, but only one level is unlocked at a time. While I seemed to have a couple of chances to skip a level, I quickly got to a point where I was forced to solve a puzzle I couldn't seem to wrap my head around before proceeding to the next puzzle in the same set. There's also no kind of hint system in place if players get stuck, either. What this ultimately results in is players wanting to put the game away when they get frustrated rather than try something different. Either giving players a much longer leash to run around with or incorporating some kind of assist system are both possibilities that could've alleviated this issue.

As it stands, Crazy Machines Elements robs players of freedom by forcing them down a very narrow path. Even the puzzles themselves will make you feel forced to do a specific set of events, with obvious gaps set to place objects (and oftentimes no allowance to put them elsewhere) and a system in place that gives a perfect score when the “perfect” solution is found. Some will find this to be helpful guidance, but others will see it as the developers limiting the possibilities of that which they've created. On top of this snail-speed progression, the controls (which are clearly more suited to PC) don't make the best transition. Items can't be mirror-flipped, only awkwardly rotated, and given how precise some placements need to be, not being able to use the D-pad for precision is cumbersome. 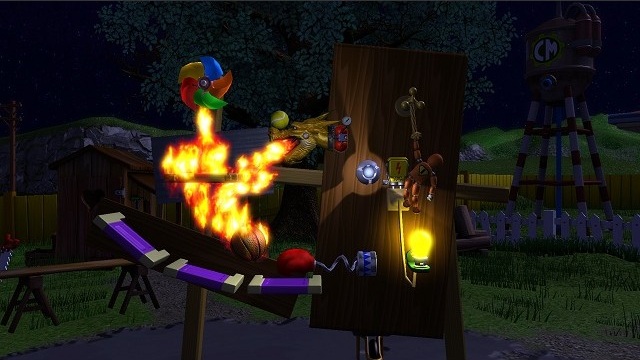 These complaints aside, it's enjoyable to figure out the solution to a puzzle after wracking your brain for fifteen minutes, and these frustrations exist only in the main Puzzle Mode—which, sadly, is a requirement in order to unlock the Challenge Mode and pieces for user-creation. Challenge Mode gives players freedom to solve its puzzles with whatever pieces they wish, simply enforcing some limitations via a resource system, where each object placed will consume a certain amount of 'coins' from a set amount. While it doesn't necessarily require the same concise brainstorming as the standard puzzles, there's actually space for creativity there. But it's a shame that it takes such an amount of trudging through slow-paced, restrictive game play to get to Challenge Mode. Not to mention that the user-generated content can't be shared online, making it kind of a bust.

Since you probably can't run Windows 98 games on your modern PC and cannot properly appreciate the eyeball-exploding oddity of The Incredible Toon Machine, Crazy Machines Elements may be the most convenient option if you're truly craving a Rube Goldberg experience. It's also the type of game that could certainly be enjoyed in a family setting—in fact, it may very well be more entertaining (and less frustrating) to have more minds than one collaborating to find solutions. It's a puzzle game that doesn't involve pointing and clicking or falling shapes, which is good to see, but it leaves much to be desired with its blunt limitations, uninspired presentation, and painfully slow pacing.

Plenty of values, lots to accomplish The use of natural elements mixes things up Eventually, plenty of experimentation Bland, uninspired…
Friday

Plenty of values, lots to accomplish The use of natural elements mixes things up Eventually, plenty of experimentation Bland, uninspired…
February 10

Plenty of values, lots to accomplish The use of natural elements mixes things up Eventually, plenty of experimentation Bland, uninspired…
February 21

Plenty of values, lots to accomplish The use of natural elements mixes things up Eventually, plenty of experimentation Bland, uninspired…
February 24

Some people aren't happy about the rerelease.
News 1 day ago
8

The Roadhog nerf needed to be bigger.
News 3 days ago

We've got to go back!
Games 5 days ago