Boxboy! + Boxgirl! Review | Life is like a box of puzzles

BOXBOY! + BOXGIRL! is the latest entry into HAL Laboratory’s now long-running monochrome side-scrolling puzzle platformer. You’ll take Qbby, Qucy, Box Dad, Box Mom, and Qudy through a staggering 270 puzzling little stages. Think outside the box and you’ll get through it. The game is a joy to play through from start to finish, elevated over its predecessors thanks to a smart co-op campaign. In total, there are three campaigns to play through, each offering a ton of value and twists on the series’ tried and tested gameplay. 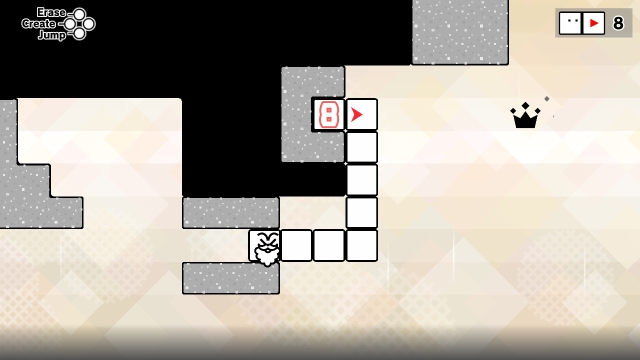 In the standard single-player story, you play as either Qbby or Qucy, which you can swap between on the world screen. You are tasked with saving their home world from destruction by stopping a meteor from hurtling into the planet.

Fans of the Boxboy! series will be familiar with the gameplay and extras on offer in the single-player campaign. Each of the 16 worlds to play through introduce a new feature, with a handful of stages provided to help you get to grips with them all. There’s a constant natural learning curve in play throughout Boxboy! + Boxgirl! Just when you have learned how to shoot boxes across pits, you’ll be tasked with snaking through dirt, flying through anti-gravity zones, teleportation, and even dealing with lasers that kill in one hit.

The new techniques you learn ensure that you always have something new to think about. As you’d expect, each new technique Qbby and Qucy learn is added to previous ones. This means that each new world can throw multiple different puzzle types at you at once. Remember, too, that you will be limited to a set number of boxes in each stage.

Unfortunately (for some), the game will prove to be a little too easy. While some puzzles will have you scratching your head, for the most part, you will fly through Boxboy! + Boxgirl! It’s a mellow puzzle game that lets you figure things out at your own pace. It’s a shame as well, that despite the cute (but incredibly simple graphics), Boxboy! + Boxgirl! often suffers from frame drops. It can suck the fun out of the game at times, for sure. 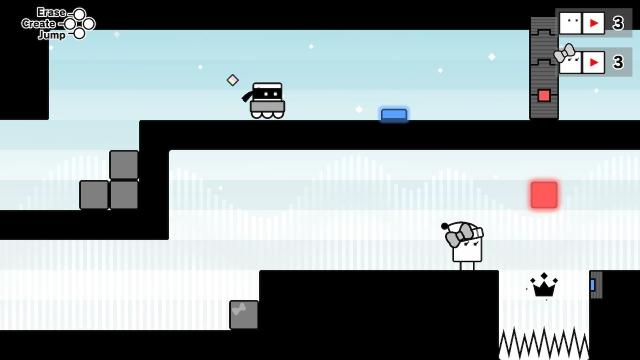 In the co-op campaign, you play as both Box Dad and Box Mom in an effort to reunite Box Baby with the rest of the Box family and friends. You can play the co-op campaign with another player or by yourself, switching between Box Dad and Box Mom with a press of a button. The puzzles here are built around both players working together. Depending on who you play with, however, things can become quite hectic. If you’re feeling delightfully devilish, for example, you can use your boxes to push your partner into a pit of spikes.

Playing the game in co-op is a blast and better than playing solo. Working together can make the trickier puzzles a little easier to work out, but the best feeling of all is when you come up with the answer before your teammate. Take that, smart guy. The change to co-op allows for some different puzzles styles, too, that require you to make platforms for your partner to jump up on to, or to press a series of switches in order to open locked doors. The best co-op stages, however, make use of character-specific switches. You will need to make it so that Box Mom activates her specific switch, which adds in a dimension that’s simply not available in the game’s single-player offerings.

Qudy’s Tall Tale, meanwhile, offers the biggest twist. In this third unlockable story, you play as Qudy, who is twice as tall as any previous playable Boxboy character. This means that the boxes Qudy can throw, place down, and use to snake through puzzling mazes are doubled in height or width. Qudy’s not just the size of two Qbby’s stacked on top of one another, however. Qudy can also bend down to the left or right. This means that you can create two different oblong shaped boxes as the tall dude.

This can make for some mind-bending puzzles. You might find that you won’t fit through a gap if you place down tall boxes, but can if you throw long boxes down as Qudy. There’s more thinking to be done in this mode and, thankfully, it’s just as fun as the rest. Just like the other modes, too, you can buy hints that will tell you how to complete puzzles but they are more satisfying to solve by yourself. 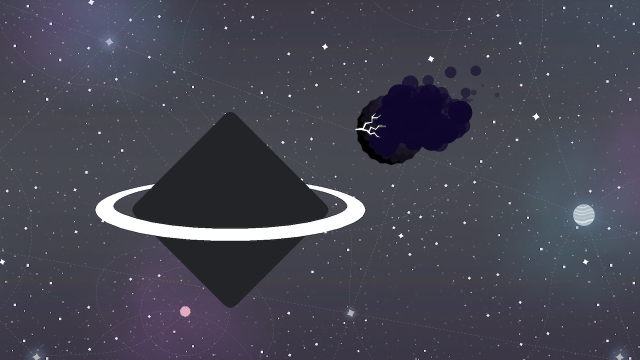 The hints system in Boxboy! + Boxgirl! is a powerful tool. Some might argue that it’s too powerful. Pressing and holding down the left stick for a couple of seconds asks if you want to spend a medal on a hint. When activated, a ghost-like apparition appears on-screen, showing you exactly how to finish the puzzle in question. It’s great for those moments where you are completely stumped, but it can become used too frequently too easily.

Without the powerful hint system, you could end up taking an age to figure out that you need to make a box shield for yourself and hop over the spike pit below to reach the other side. Without the hint literally telling you what to do, it would be left up to you to get creative and think outside the box. The safety net of the hint system is a friendly enough feature, but one that shouldn’t be overused and one that should maybe be a tad more oblique to lead you to the answer without show directly showing it.

Boxboy! + Boxgirl! would have been better if the hints cost more to use, or didn’t tell you how to complete the puzzles completely. It’s too easy to resort to in times of need. Luckily, the hints won’t show you how to collect each crown. 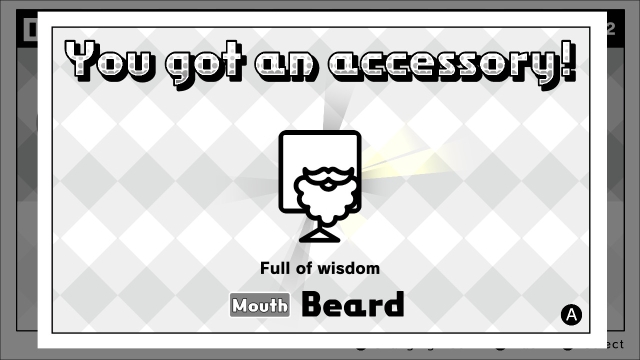 In each level, you are not only tasked with reaching the door at the end but also to collect each crown hidden within and complete the stage using as few boxes as possible. Most stages contain one crown, but a good selection of levels have two to collect. While the rest of the game isn’t particularly difficult, collecting all the crowns definitely is and is where the game sheds some of its soft outer coating. Collect them all, however, and you’ll unlock medals that prizes.

You can spend medals on all sorts of treats, including the aforementioned hints. There are amusing comics to buy, power-ups, songs, Balloon Challenge stages, and even tonnes of cute outfits to unlock. Thankfully, simply playing through the three campaigns at your own leisure will award you with hundreds of medals. Unfortunately, there is no way of buying the costume pieces that you want.

Each costume item will set you back 30 medals and are given out at random. While an outfit shop would have been neat, the system isn’t too bad as you each new costume piece is a nice surprise. There are, however, plenty of wacky outfits that you can mix and match, too. Want Qbby with a long white beard and a baseball cap? Go for it.

Balloon Challenge stages, though, are where it’s at. These time-attack stages ask you to pop 10 balloons. Do so within the time-limit and you’ll earn yourself plenty of medals. They’re fun, fast-paced asides to the mellow puzzling of the story modes. 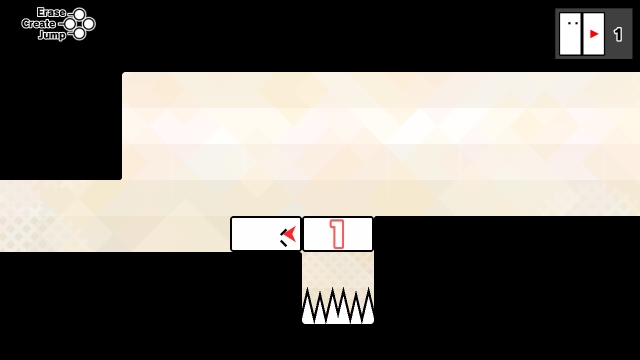 Boxboy! + Boxgirl! is an enjoyable puzzle platformer that fans of the series will love. The new co-op mode and Qudy’s taller form and separate story brings new challenges that elevate the game above its predecessors thanks to smart new puzzles that haven’t been seen in the series before. There is plenty to get on with, here too, boxed together in a surprisingly hefty package.

Unfortunately, the game is a little too easy, especially for those of you not worried about collecting every crown. The hint system provides too much of a safety net that is far too easy to fall back on. Thankfully, though, the series clever puzzles are as entertaining as they ever have been and keep the pesky frame rate issues and low difficulty from boxing you out of enjoying Qbby’s latest adventure.

GameRevolution reviewed Boxboy! + Boxboy! on Nintendo Switch with a code provided by the publisher.

Tried and tested puzzle gameplay is as fun as ever. The co-op and Qudy story modes provide extra challenge and…
Friday

Tried and tested puzzle gameplay is as fun as ever. The co-op and Qudy story modes provide extra challenge and…
February 10

Tried and tested puzzle gameplay is as fun as ever. The co-op and Qudy story modes provide extra challenge and…
February 21

Tried and tested puzzle gameplay is as fun as ever. The co-op and Qudy story modes provide extra challenge and…
February 24

New Pokemon Snap Review: ‘A missed opportunity to do something other than beat Pokemon up’

A blast even if you don't know your Bikini Bottom from your Chum Bucket.
Games 3 years ago
4

The artist always has the masters in their eyes.
Games 3 years ago
8

I found a way to break through this wooden door.
Games 3 years ago