How do you tackle a Mack truck?

All right, let’s see here, I got my nachos, my Patrick Willis jersey, 12-pack of beer, I’m ready for some football! Wait… Wayne Rooney? Rafael Márquez? And Landon Donovan? This isn’t football, this is soccer?! Where's John Madden?! He needs to be informed that some sport is trying to take the football name.

Just kidding! As much as some Americans would like to believe, the other kind of football is the world’s leading sports cornerstone. From around the world, nations gather in the masses to get a glimpse of their beloved home and national teams play. It’s a game that has been passed on for centuries, some say even dating back to the 8th century of Ancient Greece. Lucky for us, we live in a time where if we don’t want to go out and play, we have the PlayStation 3, Xbox 360, and all the other magical gaming machines one could seizure over (with glee).

Enter FIFA 12, back with a vengeance. EA Sports is currently on a little hot streak with the latest releases of Madden 12 and NHL 12. And there is no reason to believe FIFA will not continue EA’s reign as one of the best game developers around now. Once again, this title has been greatly modified. For regulars to the FIFA franchise, it still has the same feel, look, and ideas of how the football gods intended the game to be. For newcomers, it’s easy; right from the get go, the game starts with tutorials for everything. Just like learning how to walk all over again.

Of course, all of the training can be skipped (uh-oh, big shot over here, says “he knows how to play the game”). Physically, the game is played the same; strategically, it's another story. A new feature to FIFA 12 is pro player intelligence. Now players on the field work their strengths and attempt to avoid their weaknesses. If a player is fast and can pass, he’ll most likely want to push the attack and look to make a play. If a midfielder lacks shot power and dribbling skills, he’ll look to make tackles and play more defense.

If you have played any of the resent EA team games, you would notice a bit of a pattern: some new menu layouts, “Pro Player”, “Ultimate Team”, and a few other copy and paste features. So far, though these features are made close to perfection, they're getting a bit dull. EA Sports is implementing all their new technologies to any game they release and tuning it for each specific sport. I suppose that's fine for people who only play one kind of sports game every year, but all-around video game sports fans might not be as gullible. 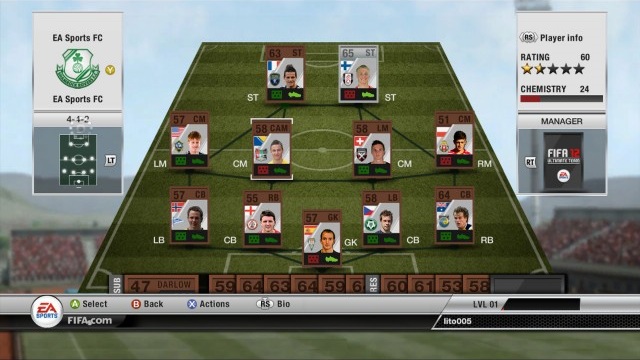 I’ve become bored of the same game modes, one in particular being FIFA 12’s version of Pro Player mode. It's supposed to make the game more realistic by only controlling one player on the field, but being player-locked on a football field is like waiting for that one bus that is always late. I set up my pro to be a 6'3", 210-pound beast of a striker, only to watch the other team’s offense basically turn the game into a passing exercise. For days, my defense would hardly give me a chance at an offensive attack. So I changed to midfield, thinking maybe I could just play duel offense and defense… Nope. My teammates found it impossible to help me make tackles on D and could hardly keep the ball on O.

Online head to head is also a major addition to FIFA 12, on the good side this time. This is for the guys and girls who can’t get enough football action, a mode where they can choose a league and work their way to the top. Throughout a 10-game season, player stats increase and decrease depending on how well they perform. It’s much like a regular season, just a bit more dynamic and fast-paced.

But do you know what the best addition to the new FIFA is? The impact engine. EA has gotten extremely good at showcasing “banging bodies”, not only with the hits, but tackling, dribbling, jukes, and even shooting. Unlike Pro Player, this is realism in best way possible. No more relying on just hitting the turbo button to dash pass defenders. Jockeying for position plays a major role in the success a player will have on the pitch. 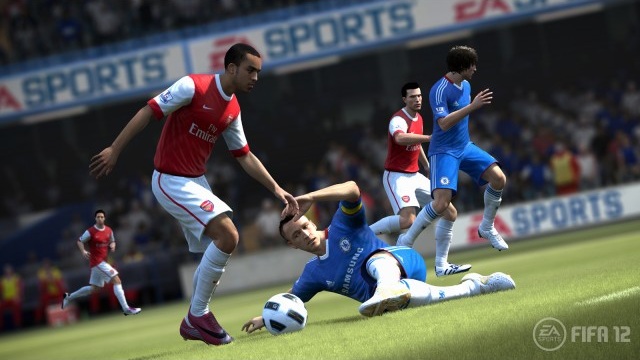 FIFA 12 should be applauded for its attention to detail. The little things make a huge difference with sports games and there are some minor details that help push this year’s title past the rest. Starting off with the soundtrack, it’s a well-diverse selection of international music. To go along with the tracks, the option to change commentary language is decently polished. I never get tired of hearing the Spanish announcers yell “Gooooooal!!!", followed by crisp Spanish banter as I resume my attack. There is also a setting that allows you to change the color and design of the ball. Trust me when I say this, there are plenty of balls to choose from (har har).

Despite some of its shortcomings, FIFA 12 is one of the best football soccer games ever released. With all the new features and popularity of the sport growing, we should all expect things to only get bigger and better. But let's not talk about having Landon Donovan thrown on the cover. (Damn crybaby.)

Well, we weren't expecting that!
News 4 days ago