Trade in slice and dice for Barry Steakfries and a bubble-blowing Jetpack.

I tend to lean towards the lesser known iPhone games. Anything free, underground, and more importantly, free is all right by me. Truthfully, $0.99 is my limit. I'm not about to spend $2.99 on something I'll only play as a distraction at family gatherings.

That's my excuse for not playing the fantastic iOS title from Half-Brick Studios, Fruit Ninja. Slicing and swiping at virtual fruit, avoiding bombs, and lining up combos seemed a little silly to me. Even after playing the game time and again, I found the fruity explosions silly, despite that addictive, arcade-y gameplay that's kept the title atop the App Store charts for months and months.

So now what am I supposed to do? Jetpack Joyride is ten times sillier and twenty times more addictive. I'd say we should just swallow the pill and enjoy the (joy)ride.

The objective in Halfbrick's latest is to steer our hero, Barry Steakfries, as far as possible through the underground base. You'll need to avoid zappers, lasers, and missiles while collecting coins, "spin tokens", and vehicle boxes. Ultimately you'll spend the coins on upgrades, both cosmetic and for your vehicles, new jetpacks and bonus abilities like head starts and distance-increasing bombs.

Yes, Jetpack Joyride is a lot like those helicopter games where you'd navigate a chopper into a narrow passage, but its vehicles provide bursts of alternative gameplay. Instead of tapping the screen to fly upwards, the Profit Bird (a playful money farting dig at Angry Birds) vehicle has you tapping the screen to flap its wings. The Crazy Freaking Teleporter gives you a moving target the vehicle will zap to when you tap the screen. Mr. Cuddles is a fire-breathing dragon that will set the hapless scientists on the bottom of the screen aflame. 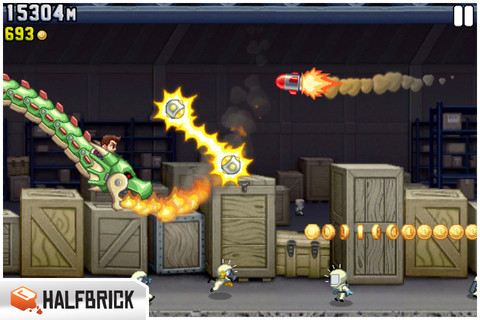 Without a doubt, Jetpack Joyride is one of the deepest, more enjoyable iOS games you'll find in the App store. Adding to the equation is a reward system that, similar to Call of Duty, incorporates the points and coins players earn in game. Some challenges require you to cover a set distance in a specific vehicle. Another will require you to just miss a certain number of hazards in one playthrough. Another will have you rubbing your head on the ceiling.

Combining a score-attacking arcade game, the addictive challenges of Call of Duty, varying vehicle mechanics, and all the humor and absurdity Haflbrick can muster, Jetpack Joyride is a godsend of mobile gaming. While you still won't sit and enjoy the game for hours, it's an ideal burst of entertainment in the doctor's office, before boarding a plane, or on the can.

Review is based on play off the iPhone 4. Copy was purchased by the author.

Here are all of the bug fixes and new additions.
News 2 months ago
8