Bars are often seen as a reflection of life itself. For many, it serves as an escape where people can escape the reality of their day-to-day grind and enjoy a drink … or six. While they all serve the same purpose, every scene is different as they have their own unique set of regulars, memorable one-off customers, and plenty of interesting stories that can’t be repeated outside the establishment. A bar setting is one of the reasons why Cheers was able to be a success for as long as it aired and Sukeban Games’ “cyberpunk bartender action” title VA-11 HALL-A manages to capture a lot of the charm one would see in their local dive bar.

Originally released on PC (and later ported to PlayStation Vita), Va-11 Hall-A is given another chance at winning fans over thanks to its new port on PlayStation 4 and Nintendo Switch. Unlike the Vita version, which slightly streamlined the interface to fit on a smaller portable screen, the latest port retains the original layout. It’s not unwieldy by any means, but I did find it slightly more difficult to mix drinks in the new setup due to it being extremely picky of where you’re pointing the analog stick. Early on, I’d add the wrong ingredient to the drink I was mixing, but this is quickly rectified by resetting the drink. This issue quickly became a non-factor as I got used to it, but that was never an issue on the previous Vita version. Other than that one quirk of using a controller rather than a mouse and keyboard, the port is picture-perfect.

As mentioned previously, the entire game revolves around the life of a bartender named Jill (which is short for Julianne but you better not call her that unless you want to receive a death glare). She’s very much your typical 20-something that is trying to figure out her place in the world while serving customers a wide variety of alcohol. Not only does she have to tackle her own personal issues, but the state of the world is one of chaos. Violence has been erupting on the streets and tensions between civilians and the White Knights that allegedly serve them have reached a boiling point. Despite all of the technological advances, the world is just as fractured as ever before, and it becomes difficult to deal with your own issues when life itself is extremely stressful. In many ways, the future presented here is a lot like the current and the 2016 release is just as relatable as time continues to pass. 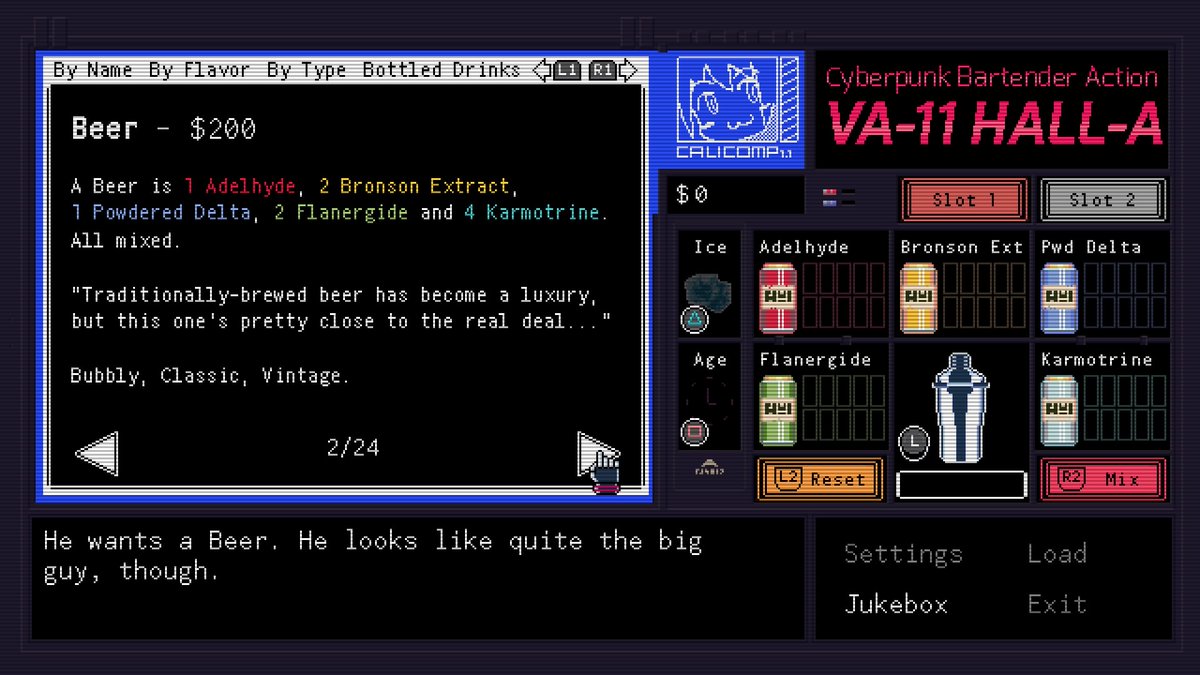 However, everyone has their own problems and that isn’t an excuse for not paying your rent. Which is why Jill has to put on her best face and serve the various faces that pop up at VA-11 Hall-A. Like a real bartender, most of player’s work is split into two distinct task. First, they listen to people as they vent about their own days and hardships. Second, they provide the necessary depressants that will help them cope with the pain of everyday life. Mixing drinks is quite fun in VA-11 Hall-A as they’re all built off the same five ingredients that can then be altered by either adding ice or aging the drink. There’s a handy guide book that tells the bartender exactly what to add into the mix, so there’s not much memorization to be had. For the most part, it’s very straight forward, although there will be more difficult customers that are vague about what they want and will ask for a specific flavor or type.

Easily the highlight of the experience are the various characters that walk into the bar. These range from talking corgi pups with eyepatches (truly the ideal dog) and scumbag reporters to robot sex workers that look underage. To describe the cast as colorful would be an understatement, and getting to learn a little more about all of them is one of the reasons why the experience is so compelling. Even the few scumbags that come in are interesting to talk to and players get a great taste of what this futuristic world has to offer despite nearly always being in the same location the entire time.

While this is mostly a visual novel without much choice, there are a number of ways that the player can impact the story. First, serving the proper drinks will help the player get bonuses at their job. This is important as rent is due at the end of the month and money is scarce. However, one has to balance their work and home lives and players will be able to buy stuff for Jill that will help her concentrate more at work. There’s even a retro game system that can be purchased that allows the player to check out a very difficult shoot ’em up mini-game. Other than that, it’s a pretty straightforward title with a lot of reading. Unlike a lot of VNs, you won’t find a ton of repeated dialogue or an overly wordy script. This has been expertly edited and every scene serves its purpose in the overall story.

Despite having a story that is filled with cybernetically enhanced people trying to cope with their dystopian life that is blurred more than ever due to lifelike artificial intelligence, VA-11 Hall-A is remarkably human in its nature. It goes to show that no matter how much changes in society, we’ll always be grappling with many of the same problems. Struggling with aspects of freedom, reality, and what it means to truly move on from the events that appear to define your life. It’s a fantastic story of self-growth in a futuristic setting that is just as interesting as its characters. It’s this careful world building and relatable writing that makes Sukeban Games’ gem a must play on consoles.

GameRevolution reviewed VA-11 Hall-A on PS4 with a copy provided by the publisher.

Fantastic script. Mixing drinks is fun. Port has zero issues. Controller can take a bit to get used to. Let…
Today

Fantastic script. Mixing drinks is fun. Port has zero issues. Controller can take a bit to get used to. Let…
February 3

Fantastic script. Mixing drinks is fun. Port has zero issues. Controller can take a bit to get used to. Let…
February 10

Fantastic script. Mixing drinks is fun. Port has zero issues. Controller can take a bit to get used to. Let…
February 21

Guides Fantastic script. Mixing drinks is fun. Port has zero issues. Controller can take a bit to get used to.…
8 months ago

Another round, please!
News 4 years ago

15 PC Visual Novels That Every Gamer Should Play

Steam may be censoring them, but you still need to play them.
Originals 5 years ago

From Hogwarts and back again.
Games 1 week ago
8

Art should have meaning.
Games 4 years ago