Here comes another World War II-influenced flight simulation. I know you’re excited! (Maybe…) From the runway to dog fights with the enemy, Air Conflicts: Secret Wars is sure to have you on the edge of your seat. That is, you'll either get up and change the video game or because you love this one so much and just can’t get enough. Okay, that might not be useful, so just start playing the story mode and you’ll have your answer soon enough.

Little details help keep the games interesting, though. The ability to control every aspect of your plane, including the landing gear, glues it all together. Planes twist and turn in the air, moving with graceful aerodynamics.

Of course, all of this is wrapped in the story mode. Ladies, get excited, the star of this title is a daring and heroic woman who doesn’t know the word “fail”. She’s a little like Amelia Earhart, if Earhart shot machine guns. Taking on dangerous missions that require crossing enemy territory, “DeeDee” is the savior of early World War II. Her assignments are vital in the fight to winning the war. As story mode kicks off, right from the jump, she is faced with the task of shipping whisky cargo over unfamiliar terrain. But there are anti-air guns on the ground and not to mention flyers in the air, so shoot them down of course!

Story mode is definitely the main attraction, but not to fear, online multiplayer has some solid challenges for you to tackle as well. Play with some buddies or shoot it out alone, but with the opposition being everywhere, figuring out how to work with a team is beneficial. Devising strategies also help enhance your dog fight experience. The best way to get a decent grasp of how a real plane feels in the air is to set the controls to simulation instead of arcade. Watch, in no time you’ll be barrel rolling and flipping all over the place, without stalling your engine.

I can see there was some thought put into how the dog fights are played out. Instead of just shooting directly at a plane, calculating angles and speeds, in order for bullet trajectory to land in the necessary spots, is a must. Chasing enemies can be tedious, though, if you don’t make the kill in the first pass, so double, triple, or even quadruple backing is required. 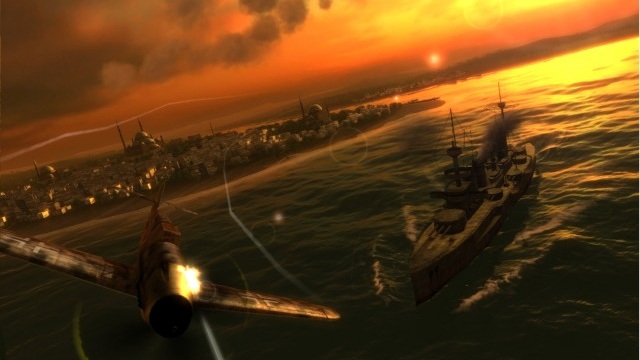 Air Conflicts is a type of game that should not only be fun to play, but have some good background story and information to honor its historical source. Wartime of course is a serious but very interesting matter. It’s always good to see developers put on their thinking caps and show they did their research on the subject. Unfortunately, there aren’t many historical details incorporated into the game. Airplane types are nicely modeled after popular planes from the World Wars. And some levels do depict destruction in cities well, but overall it’s bland.

After all of the dizzying, head-spinning tricks learned from playing Air Conflicts: Secret War, maybe you’ll actually want to take control over real flying machines. Just don’t get the idea on my Southwest flight next week. This isn’t the flight simulation people will write home about, but it gets a thumbs up for trying.

Review is based on X360 version. Copy supplled by publisher.