When you have company over, sometimes you might want to do something more active than just watch a movie… like play a video game. What a novel concept! Ah, but you don't want to crush the souls of your guests with your pwnage at X shooter/fighter/etc. Perhaps a trivia game could serve as some middle ground for your not-as-awesome-as-you-are house guests? Scene It? Movie Night offers up the concept of movie-based trivia as a downloadable title free of DVD/board-game nonsense. Because screw (bad) board games, this ain't the 1970s! Or whenever it was that people did that kind of thing.

Unfortunately, Scene It? Movie Night doesn't fare that much better. It's got bare-bones presentation, with some lower-res images that look a bit weird on an HD screen, but hell if your guests will notice, right? Their eyesight's not as keen on that kind of thing like yours are.

And then there's that announcer—because every trivia game needs an idiot announcer these days to keep things wacky and entertaining, don't ya know? He spews forth cringeworthy lines including words like “ridonkulous” and has that kind of horrible VGA host dialogue that tries so hard to be funny but fails miserably. Compared to You Don't Know Jack, it's thoroughly weak, though the actor does try his best to sell it. If it's any consolation, the music sets the right kind of tone and the movie cut-scenes don't look so bad.

As for the movies and the questions—that whole “trivia” part—it's all right. The pack of questions that the game starts off with covers bigger, more popular, mainstream movies like Harry Potter and Lord of the Rings, with the prospect of more packs coming in the future for more specific genres, like sci-fi and the like. The game awards points based on how quickly questions are answered, but doesn't even give you enough time to read the question before the timer starts going down, meaning perfect scores can only be achieved through dumb luck, psychic visions, or (maybe) really keen intuition/knowledge.

Scene It? Movie Night mixes things up to a degree, seeming to flail its arms out with oddities like children's drawings being created before your eyes and tasking you with figuring out the movie being depicted, or portraying a scene as it would look in an 8-bit video game. They add a bit of variety in a much needed grab bag of trivia types. The main problem is that the more complex, involved questions—like multi-part answers—don't reward partial success, and are worth just as much as the simpler questions, which unbalances the questions. 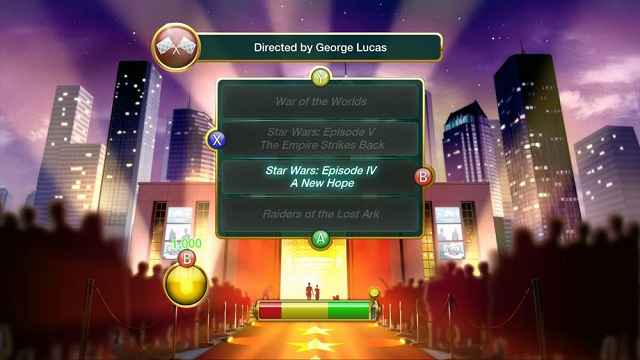 Like any good trivia game, you can always totally steal a win in the final round if you're really good or completely destroy your lead if you lose your cool. So maybe 'balance' isn't exactly what they were going for, anyway. There are a couple of options for play in regards to buzzing in or not, but come on, you don't want to demoralize your company completely, so you'll let everyone get the chance to answer each question by leaving that option off. There's also no way to select what kinds of questions will show up, meaning you have to sit through the less-interesting ones and hope that another of those really sweet 8-bit ones come up. But at least things move quickly, with each full game being able to be finished in about 10-15 minutes or so. And hey, if you're really lonely, you can even play it by yourself and let the announcer taunt you.

Your mileage with Scene It? Movie Night will honestly rely heavily upon how much you're into movies and whether or not you could use some socialite fodder to keep those co-workers you don't really know why you invited over entertained. As a trivia game in digital form, You Don't Know Jack has better writing, slicker presentation, and is more entertaining and flashy overall. On the other hand, its questions are much broader and it's also likely more expensive. Scene It? Movie Night feels like a bit of a quick cash-in by comparison, but then again, if you really care about trivia games, you might not be as interested in how it's dished out. Plus, if you're a big movie buff in particular and like showing off your filmography IQ, this is a cheaper alternative and you don't have to leave your house.

No one can hear you scream.
Games 14 hours ago

We've got to go back!
Games 4 days ago

The lack of review codes has been branded a "huge red flag."
News 7 days ago

An odd controversy.
News 7 days ago