I Am Alive Review

Post-apocalyptic games and movies are widespread and widely criticized. Mayans predicted the world would end this year and in some ways the media has used this as an entertainment tool. If the world doesn’t completely end, we are guessing there will be devastating effects that will change the course of our existence. This may or may not be true, but all we know is that we are still here brainstorming what life would be like if cataclysm ever happens.

Enter I Am Alive. After what the story explains as disastrous earthquakes destroying human civilization, protagonist Adam has trekked some 3,000 miles from the east coast to the west coast of the United States in search of his family. Gameplay starts off a year after the earthquakes have started and most people have died. Adam's sole purpose in life now is to be reunited with his wife and daughter, his despair signified by the game being in black and white, with only a few subtle touches of color.

The premise isn’t the most creative or well-polished one in games, but it’s simple and the game sticks to that. There isn’t any attempt to trick you of some false world that couldn’t ever exist, and it isn’t built up to be an elaborate drawn-out story. In this new world, survival is the order of the day and at times it can be tough. However you would imagine life being in a post-apocalyptic state, I Am Alive gets it and is a nail-biter in its own way. Having to scrounge for supplies makes the situation realistic and desparate, and forces you to pay close attention to surroundings.

Fallen buildings, ship-wrecked boats, starving survivors, dust-covered streets, murderous thugs—they are all here. During the course of the story, you might begin to think, “Could I survive if this actually happened?” The answer is "Probably not." Sorry, Bear Grylls, rafting with a garbage bag or belaying a cliff fall with baboon intestines isn’t going to help you here.

Some frustrating moments come in a few forms, the first of which is the climbing scheme. This feature is designed to pattern after human exhaustion. As living creatures, we get tired, and the stamina meter shows that. But there is a lot of amount of climbing and if you don’t have some sort of energy reviver in your items pack, you'll likely fall to your doom. (Come on, Monkeyman, I know you can make it to that ledge without that soda you got.) Of course, I was playing on the hardest level of difficulty, so the supply of items and stamina bar may be more abundant on normal difficulty. 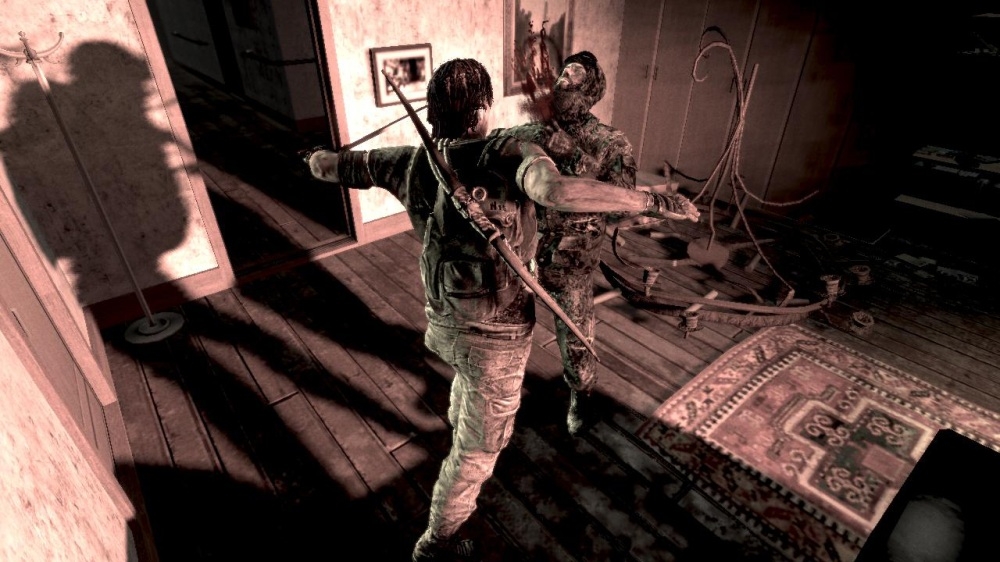 The basic controls are funky too. When faced against killers wielding machetes—somehow every killer has a perfectly crafted machete or gun in the apocalpyse—you have two options: shoot them or “struggle kill" them with your machete. When there are multiple enemies, struggle killing won’t work because backup will come before you can execute it. But you can’t just shoot everyone because bullets are at a premium and most likely you will only have one or two while up against five guys. And there aren’t any fight controls so don’t expect to duke it out either.

If no enemy has a gun, you are supposed to be able to “scare” them with your gun and they will submit. Sometimes this works, but many times it doesn’t. They will simply become tired of having a gun in their face and rush you with anger. The best option is try to divide them and handle each one separately if possible.

Probably the most ridiculous aspect is the storyline itself. Adam’s journey begins with the mission to find his family but quickly finds himself helping out a different family also in need during these trying times. I definitely understand helping out others in a crisis, but it is the extent to which he sacrifices for them that's strange. It's as if Adam owes his life to these people. Precious time is ticking away and he’s climbing 40-story buildings to start fireworks for a rescue he most likely won’t even make.

Many people first caught glimpse of I Am Alive four years ago and I can’t say four years was worth the wait. It’s not that this is a bad game—that's hardly the case, as it’s worth buying simply if you like the post-apocalyptic genre. The survival and intimidation/combat tactics are both the best and worst elements of the game, a love/hate relationship that can sway either way depending on the type of player you are. Running gameplay is short, but as a downloadable content only, this game at 15 bucks doesn't hurt.

KSI has finally responded to Gordon Ramsay after his scathing review of Prime drinks last week (January 12, 2023). He…
News 1 week ago

It's been a great year for television.
Originals 4 weeks ago