It's old and new at the same time.

Truer words were never spoken way back in 2006 when Joe Dodson reviewed the original New Super Mario Bros. game for Nintendo DS. "Can Mario ever truly be new again?" Joe asked. New Super Mario Bros. 2 is an answer to that question, even though it teeters on the boundary between yes and no.

With Mario's "New" series making the leap from DS, to Wii, and now to the 3DS, what could possibly be new at this point? How can Mario rescue Princess Peach differently? Do Koopas shoot guns at our mustachioed plumber? Will Peach finally just stay rescued?

The reality is that the struggle between yes and no actually extends to two core issues Nintendo faces, both in Mario games and on the 3DS platform. NSMB2's big addition to the franchise is the focus on collecting coins towards a high score. The golden collectibles litter every single landscape and tally into the thousands over the course of the game.

Evolving the idea of collecting 100 coins in a single level giving an extra life, NSMB2 maintains your coin count across levels and regardless of whether you fall down a bottomless pit or fall victim to a stray koopa shell. I arrived in World 2 with over 50 extra lives. With the stakes so low, I found myself encouraged to try and try again anytime I missed a particular stack of coins or one of the three large golden coins hidden throughout each level.

To compliment this new scoring method, NSMB 2 also adds Coin Rush Mode, which allows players to choose three levels and go for their highest possible coin score. These three levels are saved to the 3DS SD card and traded with other players through StreetPass connections so the people you walk by can try to beat your scores (and you theirs).

When I first tried this newly refocused gameplay at E3, I wasn't exactly impressed. My experience with Mario and company typically peaks when I'm breathlessly bounding over goombas and kicking koopa shells through waves of enemies. When Nintendo and the team behind NSMB2 decided to focus on coins so heavily, they also slowed players down. 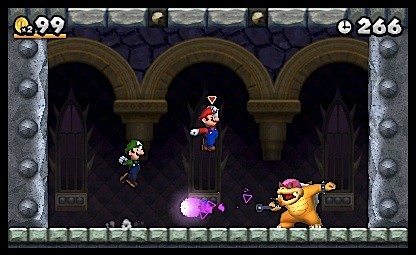 Now players will find themselves searching every nook and cranny for hidden coin boxes or unknown triggers that flip scores of coins into collectible space. It's a very different feeling for a Nintendo game. Typically the Japanese publisher of Metroid and Zelda ignores the common collectible trope many AAA games have fallen victim to. If I'm told that there's something to collect hidden in every level, I will obsessively search everywhere and kill any enjoyment I might be having by simply enjoying the main gameplay loop in front of me.

That said, several new power-ups balance out the coin-hunting cancer in NSMB 2. Notably among these is the Golden Fireflower that turns bricks into coins and kills every enemy in the fireball's blast radius. Knocking off several enemies with one fireball will actually reward you with multiples of 5 coins apiece. Another golden power-up turns koopa shells into coin-trailing death machines.

But there's another side effect to the coin-hunting I thought I'd decry in this review. Mario games are always packed with tons and tons of hidden boxes, invisible triggers, and hidden pathways. While you're looking for spare change, you'll often stumble upon alternate level endings and the hidden large coins. I can see how the development team struggled to encourage players to seek these mysterious treasures out, so in that way the hunt for coins succeeds.

The second issue Nintendo seems to be wrestling with in NSMB 2 is their handheld's glasses-free 3D, and whether it's worth pursuing in their games. Some have taken extensive advantage of it and actually been better for it. Chief among these is Super Mario 3D Land, which consequently is still the better Mario game for the system. 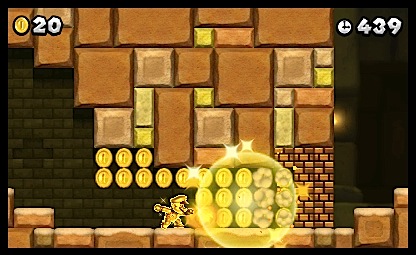 The 3D effect in NSMB 2 is almost nonexistent, to the point where I would say it could be a normal DS game. If your 3D slider is locked in the off-position, you won't be missing out on anything. It speaks to the difficulty reviewers have with 3DS games. Do we completely ignore the feature or do we take points away from a title because it doesn't utilize the effect in a unique and fun way?

For the most part, NSMB 2 is good enough to outright ignore the oversight. There's a ton of platforming gameplay to enjoy, including varied bosses, excellent level design, and a new twist on the classic formula in the form of Coin Rush.

If you're a 3DS gamer with a penchant for Mario in any way, shape, or form, New Super Mario Bros. 2 is well worth your time. Despite that, if you've had your fill of Nintendo's mascot and the perpetually kidnapped Peach, you might not find a lot of entertainment here. You might resent being the 99% to Mario's coin-hungry top 1%.

Our princess is in another casting.
News 2 months ago

Is this me Mario?
Film 2 months ago