There's nothing finer than being in a loving relationship. Waking up next to your partner, holding hands, feeling each other's heartbeat, feeding your lover the bloody, freshly-ripped remains of inhuman monstrosities. Ah, young love.

Such is your task in Pandora's Tower, the “new” JRPG/adventurer hybrid from Nintendo and Xseed. I put “new” in quotes because although its release is rather recent in North America, it's been on the European and Australian market for over a year now, and even longer in Japan. Which makes sense, because the game is decidedly Japanese. Great for people who like intricate games and unique, borderline-bizarre plots—not so much for your average 'murrican player. I fell somewhere between the two.

Pandora's Tower puts you in the role of the protagonist Aeron. You travel to an area of the world known as The Wasteland, where a great chasm called The Scar is prevented from widening by thirteen chains that hold in place in its center a massive fortress—and giant castle of death—known as the Thirteen Towers. You're at The Scar because that's where Mavda, an old Vestran merchant who for some reason decides to help you, said you should go to cure your girlfriend Elena's curse, which manifested itself during a performance at a Harvest Festival. Elena needs flesh to survive, and it's up to you to go get it for her.

As for exposition, you do get more of the backstory as the game progresses, told in dreams, flashbacks, and extrapolated from old notes Aeron finds. But in that first five or so minutes, you have a sword, a chain, and a tentacle-sprouting girlfriend—that's about it.

The game itself is mainly fun; it plays very similar to The Legend of Zelda: Majora's Mask. There's no overworld to mess with, though; you simply exit the Observatory grounds (which operates as home base for Aeron, Elena, and Mavda) and choose which tower you want to go to and—ZAP!—you're there. The towers are large and begging to be explored for treasures and goodies which you can use to create or upgrade certain weapons and items, but Aeron must keep an eye on the time. Link may have had three days before the Moon came crashing down on Termina, but Aeron only has mere hours before he becomes the Beauty to Elena's Beast.

This time element is an interesting twist to the dungeon crawler that worked for Majora's Mask and it works for Pandora's Tower as well. I found myself in more than a few situations where I finally solved a puzzle, eliminated a particularly hard beast, or simply found the location of a new door or switch that I needed, and started patting myself on the back… only to realize that the Elena-meter was in the bright pink. This meant I only had a few moments to race back to the entrance of the Tower and back to the Observatory to feed my precious girl-beast some disgusting, dripping beast flesh or else there would be no Elena, only Zuul. 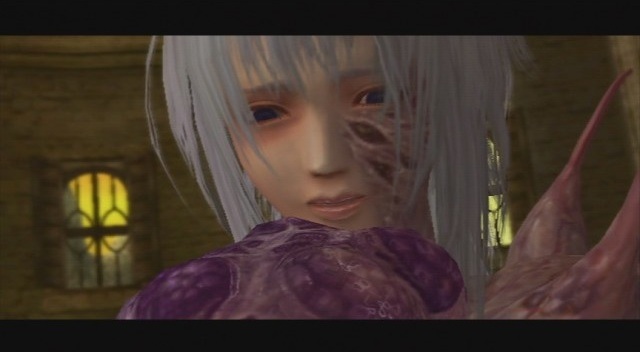 The towers and enemies within are not brutally challenging, but they certainly aren't cake-walks either. In fact, the most common scenario is finding a problem, then finding the solution to the problem, then trying to get from Point A to Point B in the fastest way possible. Many of the challenges make great use of space, requiring you to think about not only Aeron's position on the floor, but his position relative to the floors above and below, and taking calculated leaps of faith.

The visuals in both cutscenes and gameplay are top-notch, and the music is bold and beautiful, pushing the limits of the Wii. The gameplay was a little hard to get used to, as many games on the Wii that require the nunchuck can be, but unlike games like Epic Mickey it's not hideous. You'll get used to it fairly quickly.

It becomes clear right away that the star of the show is the Oraclos Chain given to Aeron before departing for the first tower. To make another Zelda reference, it's like Link's Hookshot but cooler. The chain does the basic things one would expect a chain in a video game to do, such as pull things closer and help make your way across chasms, but it does oh-so much more. Having a piercing barb at the end, the chain can be thrown into a beast and be ripped out after it sinks in, causing damage to the beast and tearing out hunks of flesh as it dies.

This talent will become invaluable during Master Fights, where Aeron can sink the chain into the Master, then pull on the excess chain to put more power into it and cause greater amounts of damage. Enemies can also be bound together with the chain, so that a strike with a weapon can wound both enemies. You can also use it as a lasso to throw enemies into other enemies, which may have prompted a big “Yee-HAW!” from me while I did it all rodeo-style. Proficiency with the chain is critical to progress in the game, and I often found myself using it more than my actual weapons. 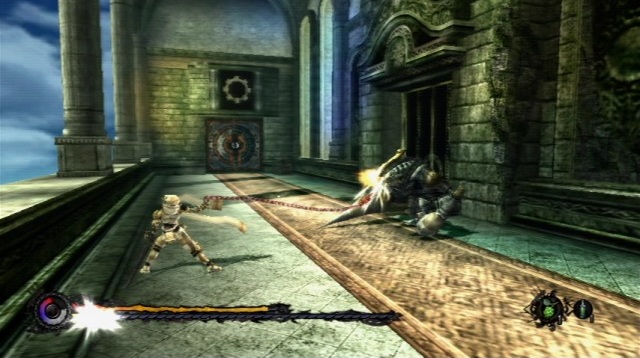 But if there is one big negative mark, it's the one you're supposed to save, Elena. And it's not even the whole "feed her freshly torn hunks of monster flesh or she turns into a monster herself" thing, though that is usually on my list of relationship dealbreakers, right between “hates Disneyland” and “punches babies.” It's that… well.. it's…

No, seriously. She's needier than the neediest people I know in real life (and that's saying something). As a follower of Aios, one of the gods in her world, she has lived a vegetarian lifestyle all her life for religious reasons. But when it turns out the only way to lift the curse is to eat the Master flesh… well, I can understand the trepidation the first few times, but on the twentieth serving? Don't be such a drama queen and eat up! Aeron has Towers to explore!

On top of that, you have to keep Elena's Affinity level up while you're in the Observatory. That means you have to keep her entertained and keep her interested in you while showing that you're interested in her. I guess running headfirst into ominous towers to fight hideous beasts isn't enough to prove your undying love; she wants gifts too. Some of these gifts you'll find on quests, and some Mavda will need to make for you out of elements that could otherwise be used for upgrading your weaponry. I mean, trying to lift a curse is nice and all, but a diamond is forever, right ladies?

I know this may not be your taste for women in games, but I like them feisty and/or badass. Samus Aran, Chun-Li, Terra Branford, Carmen Sandiego, even Tron Bonne—all of them kick butt and they go after what they want. Even the First Lady of Damsels in Distress, Princess Peach, shows some gumption from time to time. But Elena constantly goes “Oh, Aeron!” and “Please, Aeron!” And even a few times she said, “It's so dull without you around,” and “I wonder if you're thinking of me when you're gone.” It made me want to run back to the Towers double-time to get away from the clinginess coming out of her pores. 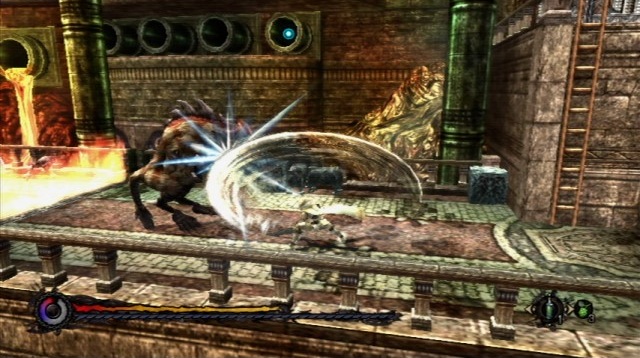 But the central problem is that Affinity is not a side quest—it's required if you want anything close to the best ending. Your Oraclos Chain is imbued with the spirit of the bond formed between Aeron and Elena. If that grows, so does your chain. If it falters, by not keeping her Affinity up or waiting too long between feedings, your chain loses strength. So you must have dinner with her, and bring her bracelets, and put up with her pining, when I really wanted to do is to get back to the towers, find the Masters, get their flesh, and save the lovey-dovey stuff for when she wasn't devolving into a hideous monster.

Pandora's Tower is an enjoyable RPG, and if the Affinity thing wasn't involved, I'd easily put this up to the ranks of four stars and beyond. There's a lot of exploring to do, puzzles to solve, and great action that requires serious thinking. The gameplay as well as the presentation are top-shelf. If you can put up with Elena, in either form, you'll find this to be a great action adventure title.

Now, if you'll excuse me, I'm going to prepare some dinner. I've developed a craving for some rare steak.

I'm currently based out of Las Vegas, NV (no I don't gamble all the time or live in a hotel on the strip) but I'm a So Cal kid through and through. I'm a Nintendiehard -- I stand by my man -- but I'm a fan of games no matter what the console, including Steam. RPGs, fighting, and action/adventure are my fortes. Give me a great story and characters any day. Call of Duty? I guess, if that's your thing. Classic Final Fantasy and Zelda? Now you're cookin' with gas!

When I'm not gaming, I like culinary adventures, moviegoing, and the Intert00bz. Ask me about my favorite web shows! I can get down on some anime, my favorite sports are boxing and baseball, and I can even get in tune with that parapsychological vibe, even though it's well-known and well-documented I'm kinda a pansy with horror stuff. (I think they get a kick out of assigning me those games for review.)

I'm also single and available, but sorry gamer girls, I play with joysticks.

Beautiful graphics and sounds, for the Wii Storyline is fairly deep Experimenting with the chain is fun Time-based gameplay Gameplay…
Friday

Beautiful graphics and sounds, for the Wii Storyline is fairly deep Experimenting with the chain is fun Time-based gameplay Gameplay…
February 10

Beautiful graphics and sounds, for the Wii Storyline is fairly deep Experimenting with the chain is fun Time-based gameplay Gameplay…
February 21

Beautiful graphics and sounds, for the Wii Storyline is fairly deep Experimenting with the chain is fun Time-based gameplay Gameplay…
February 24