While I've been playing French developer Spiders Eurocentric action-RPG Bound By Flame, I've been taken aback by the reviews for the game with the title receiving as low as four-out-of-tens by some major outlets and a general sense of condemnation. While playing, nothing seemed terribly broken, while neither did anything seem particularly fantastic (except for one character and the crafting system, which don't really come into play until later). It's only after completing the story with its terrible endgame that I understand why it has earned such critical revulsion. Bound By Flame is difficult, sometimes in an incredibly cheap way and reviewers' time spent-in-game is literally money when paid for the review, which may account for what seem like artificially low scores.

Bound By Flame's main problem is that it's a mid-range title that's been priced at almost full retail. Everything is sort of half-baked, from the writing to the art, to the population of the world it creates. Nothing feels fully nuanced, and some quests, especially early in the game, feel as if they were rewritten halfway through with their opening gambits left unchanged. Visually it's pretty enough, but it has the look of a game that has been upscaled and uprezed. As a downloadable title in the $20-30 range it would have fit right in and possibly been lauded for its extensive content. As a full-price game it sadly pales and feels like it was either never meant to be this large a game or was meant to be larger and was scaled back to fit a launch window.

Here's the pitch: In his/her quest to take on The Ice Lords—a group of necromantic sorcerers whose army of undead threatens all life on the planet (where have I heard that before?)—a mercenary, codenamed Vulcan for his/her expertise at setting up explosive traps, ends up possessed by a demon from the Worldheart, the source of magical power on the world of Vertiel. The demon wants its own revenge on the Ice Lords for stealing its power, but couldn't care less about humanity. How the demon interacts with you and others is a major selling point for the game, which features three different endings depending on how much influence you let it have in Vulcan's body and the choice you make at the end of the game.

You could say that Bound By Flame's story reads like a Game of Thrones and The Witcher fan-fiction written by a suburban twelve-year-old boy who has just discovered the pleasure of cursing. Your hero, Vulcan, is as vulgar as Geralt, the Witcher, or Thrones' Tyrion Lannister, but without subtlety and craft of character or witty dialogue. Instead of seeming worldly or caustic, the character gives off a distinctly petty "Bro" vibe, and instead of charting his own path is regularly dressed down by those above him/her in rank. This is particularly galling when having to make major game decisions.

As the demon grows more powerful within, Vulcan becomes more physically corrupted by it, burning a hole in his/her armor at the shoulder, and developing two pairs of horns and burning golden eyes. This affects game balance as well, giving increased magical flame powers, but restricting access to helms in armor, and making Vulcan more susceptible to ice damage. It's possible to choose to stay human and stave off the demon, pushing the story in a more "people first" direction which nevertheless fails to change major events in the game (like where you go and for the most part what sidequests are available). Bound by Flame has the thin illusion that your choices affect the story, but a second playthrough with different choices quickly reveals that this is a smokescreen and the game is the same regardless of what you do.

Gameplay is a mix of three different play styles: a sword-brawling "Warrior", a stealthy back-stabbing "Ranger", and the demon's magical skills as a "Pyromancer", with each having its own skill tree. For physical attacks, the game is built around a timed blocking or dodging mechanic, which when performed at just the right time, allows Vulcan to riposte or counter for extra damage. Near the end of the game, mastery in any one of these trees gives you a great deal of strength and enemies that had been bosses in the early part of the story become regular foes. However, the stances aren't created equal and having played through maxing a few of them out, it becomes clear that Ranger is superior to Warrior (though it feels like Pyromancer is the preference for the final boss).

Spiders borrows too heavily from The Witcher 2, but doesn't have the mechanical responsiveness to pull it off in the early running. In The Witcher 2 you begin with a very low level of baseline abilities in combat that can be augmented by leveling through your skill tree (so using riposte or arrow-deflection skills have to be bought with experience). Bound by Flame follows suit, but one thing you always have in The Witcher 2 is a dodge ability to escape the range of enemy attacks. Only Vulcan's Ranger stance has a dodge ability and it is remarkably iffy at times.

Rather than Bound by Flame walking the balance between enemies and the skills you acquire growing with the game's challenges, it feels like they designed a character who could meet all those challenges and then took all of that character's abilities away, making combat at the beginning of the game relentlessly and artificially difficult. This feels particularly true in places where the enemy difficulty suddenly spikes heavily, once about halfway through and then again at its monumentally frustratingly difficult final boss battle. The final boss is so challenging and capable of so many cheap shots that it requires you almost completely change the style of play for that section, making the game seem broken. It is quite simply the most unbalanced boss fight I think I have played, ever.

One place where Bound By Flame excels is in its crafting system, though this sadly only really picks up later in the game. Weapons come without pommels or guards and crafting different ones creates different defensive or offensive effects. Adding shoulder or knee guards does the same for boots or gloves, etc. Additionally healing and mana potions, crossbow bolts, and explosive traps can also be crafted, which is easier to do with dropped loot or treasure than by purchasing them from a merchant or smith. 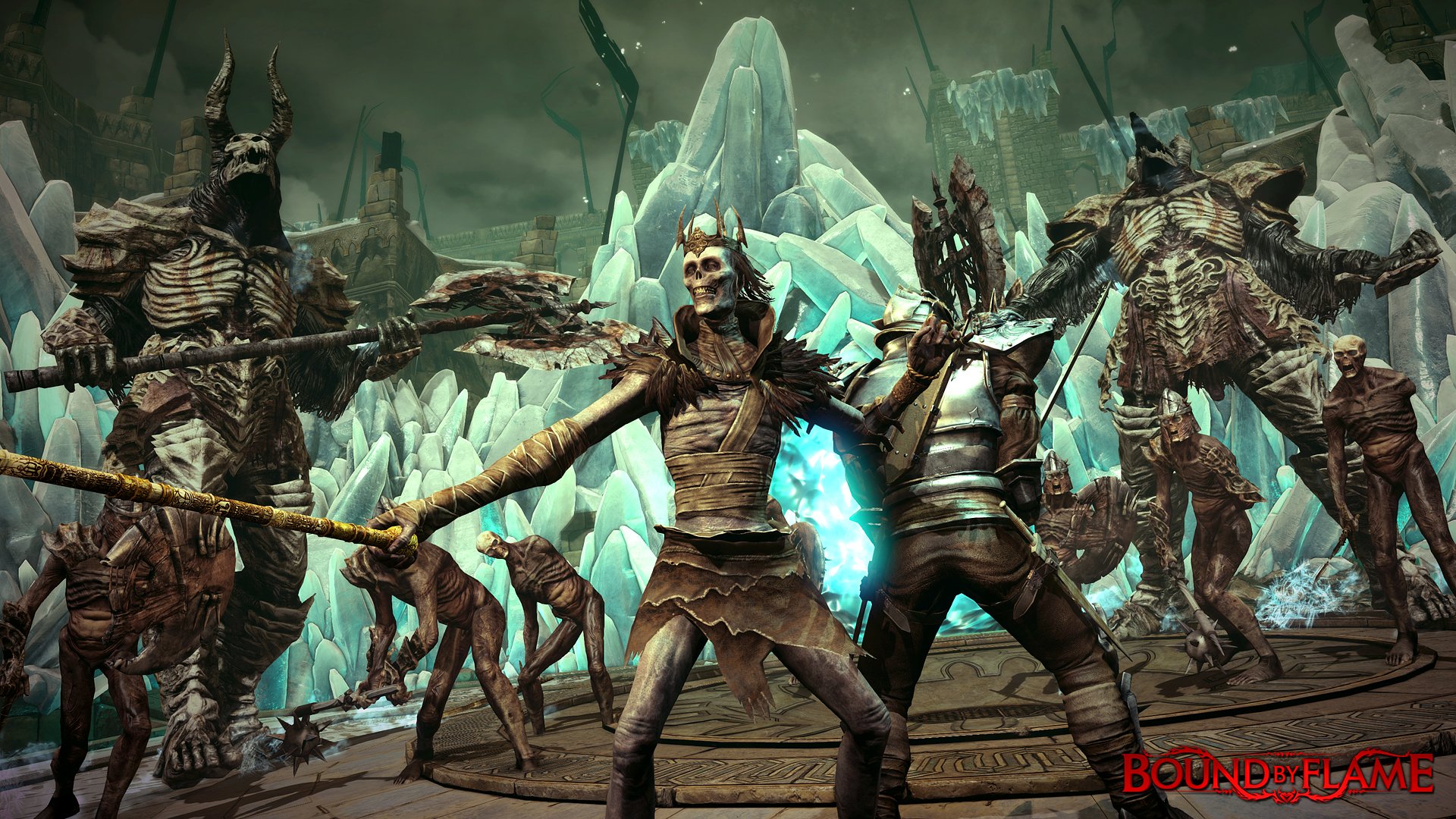 Bound By Flame's greatest saving grace is one character who comes in during the final act: Mathras, a 6000-year-old undead ghoul who has his consciousness jump from body-to-body and feels like a character from a better, smarter game who somehow wound up in this one. Mathras is both elitist and sympathetic, snooty and kind, and is motivated purely by boredom. He's not just the best character in this game; he's a fantastic example of a support character who unfortunately stands out because he's placed in a title that feels like that aforementioned fan-fiction scribbled in class instead of studying.

Bound By Flame is a frustrating game to write about as it is frustrating to play. It's not a terrible game, though, but an uneven one that could have used a lot of extra development time. It prizes the idea that you can play your own way, but it is heavily biased toward one style. As a mid-range title it would have been fine with the amount of content, but released at near full retail, it's bitten off more than it can chew; something that tastes especially poor when the meal hasn't been fully cooked.

Copy provided by publisher. Review based on the PS4 version. Also available on PC, PS3, and Xbox 360.

No one can hear you scream.
Games 3 days ago
10

The Last of Us Rotten Tomatoes Score Falls After Perfect Debut

Endure and survive.
News 3 weeks ago