Disney Infinity: Marvel Super Heroes puts the franchised heroes front and center. It does so in a very smart way, leveraging The Avengers, Spider-Man, and Guardians of the Galaxy as its launch Play Sets. For those who haven't played the original Disney Infinity (this is the "2.0 Edition"), the game, along with the Disney Infinity Base, and three meticulously crafted Avengers vinyl figures (Black Widow, Iron Man, and Thor) with an Avengers Play Set piece are sold in the initial Starter Set. Placing the vinyl figures on the Disney Infinity Base, along with power disc ability boosters, allows the player to use that individual character in the Play Set they were created for, offering each essentially a dedicated sandbox game.

Additions to the gameplay include a leveling system for the characters, with 36 or so upgradeable attributes and character specific skills, including enemy-clearing special moves specific to character style. Leveling up Captain America's ranged attack, for instance, can allow his shield to ricochet multiple times from one enemy to another, doing more damage to the overall group. Of these 36 attributes, the character level caps at level 20 without enough Skill Points awarded to fill out the entire board, making the skill tree an element of personalization in ownership; character progress is tied to the figures, not the game-save, so you can take and show off your individual figure at a friend's house regardless of platform.

This is one of several upgrades to the original game, where innate character abilities didn't offer upgrades, and beyond a few special abilities were largely interchangeable in terms of gameplay. In Disney Infinity 2.0, these skill upgrades are also applied to existing figures from the prior game, though they don't have special moves. Combat has been tuned in general, with enemies' difficulty scaling to match the upgradeable characters' increased abilities, while a solid mix of ranged and melee combat styles, sometimes specific by character, compliment those changes. Play Sets also benefit from a solid upgrade, being four times as large as the prior game's play areas and more fleshed out in detail.

Each Play Set has its own strengths and weaknesses, with Avengers feeling more sandbox-like, Guardians having a more directed campaign with traditional platforming mechanics, and Spider-Man splitting the difference with its New York Hub broken up by subway excursions and bookended by set-piece puzzle battles set in Mysterio's illusions. The best parts of any of these Play Sets are the individual set-pieces that start and end each game, which include more directed gameplay. The level hub cities are large enough to necessitate a vehicle, which works great with flying vehicles like SHIELD hover cars or bikes, and proves annoyingly frustrating with wheeled vehicles.

Driving in Disney Infinity is still kind of crappy. The controls feel iffy, the drifting which is necessary to generate power for speed boosts is too sharp to be functional, and levels are often too narrow for driving control schemes. It was my biggest pet peeve in the first game and it remains so here.

However, despite the extensive Play Sets, developers told me at a recent event in San Francisco that, at least amongst Disney Infinity fans, 60% of the game is spent in Toy Box mode. The Toy Box is Disney Infinity's free-play mode that lets players use building blocks they've unlocked with the game's spark-based currency. Sparks are acquired from breaking stuff, defeating enemies, and finding capsules filled with them, and they can refill health and increase skill levels for upgrades. Building blocks and toys specific to Play Sets can be unlocked by playing those games.

New to the series are Toy Box Games, two of which come with the Disney Infinity Starter Set, the Guardians of the Galaxy-specific "Escape from the Kyln"—in which players explore procedurally-generated multiplayer-ready dungeons in a top-down Marvel Ultimate Alliance or Diablo style. The other, "Assault on Asgard," is an Orcs Must Die-style tower defense game, pitting a hero armed with traps against Loki's hoards. These games—and two additional titles soon to be released, one based on Brave and the other on Lilo and Stitch—do a good job of showing the player what can be built within Toy Box Mode.

Toy Box Mode has also received a series of significant upgrades. Players no longer have to use randomized "Spins" to unlock build pieces they've acquired through gameplay; everything is simply available via sparks once it's been achieved in-game. Additionally, Disney Infinity now includes standard development features like invisible walls to keep characters from falling off prescribed paths or tracks into nowhere, and procedural content generation in the form of Builders and Creators for content without the need to custom-build each individual piece of a racetrack, city, or forest environment. Additionally, placeable doors now allow players to link toy-boxes together, creating multi-roomed levels, allowing for a more directed experience and story-based play. 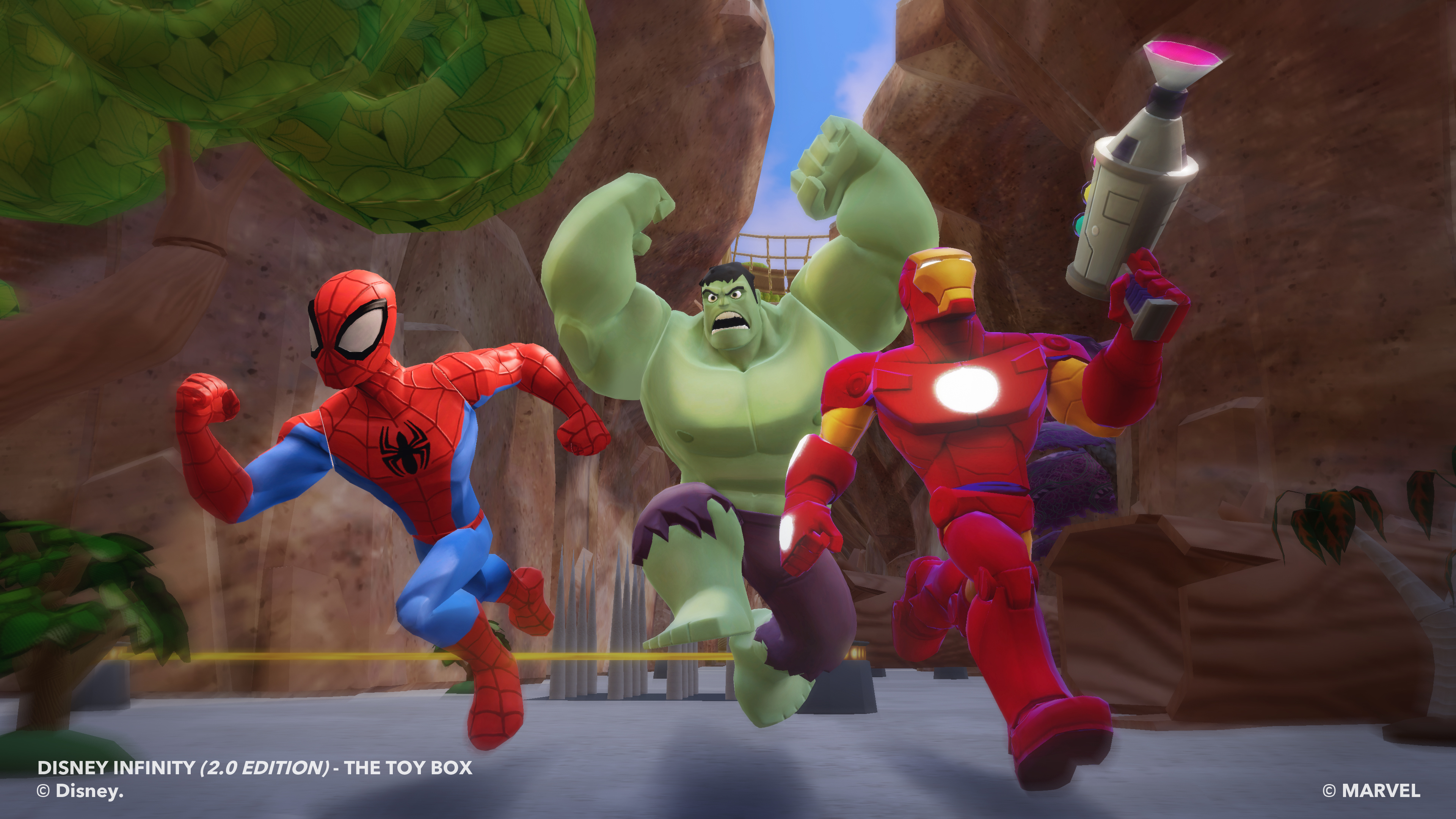 However, tutorials on using the game-mechanic tools, the creativiti-toys, are strangely missing. This is odd, considering that the game's Introduction to the Toy Box area now does a great deal of handholding in every other regard, from teaching the player how to jump and explore, to placing basic building blocks in environments. It's perplexing that the first game, which had a rougher learning curve for general gameplay, had better tutorials for actual level-designing, suggesting that you are simply expected to have played the original Disney Infinity as well.

Is Disney Infinity 2.0 an update? Is it a new game? Make no mistake, I like the game and think it's a fantastic step forward for the series, making a lot of much needed adjustments for play accessibility and the ease of building new levels. But it's also bizarrely lacking in tutorial content and seems to take for granted that it doesn't have to teach its players certain elements covered in the initial game. If it is an update, it seems slightly disingenuous for the cost to be so high and if it's its own game, it needs to be more proactive in teaching the player how to properly build game content in the Toy Box, one of the most important elements in the game. Add to this that original Disney Infinity Play Sets are not compatible with 2.0 and it feels like Disney Interactive simply expects both game purchases as a fait accompli.

To a certain extent, this isn't surprising. Like the original Disney Infinity, Marvel Super Heroes does have a certain degree of pay-for-content unlockability. The Starter Pack, with game disc, base, Avengers play set, Iron Man, Black Widow, and Thor, retails for about $75 on PS4. Other playsets like Spider-Man and Guardians of the Galaxy are each $35 and come with two figures each: Spider-Man and Nova, and Starlord and Gamora respectively. That leaves nine Marvel figures that can be purchased independently for $14. To own all the figures and Play Sets, players are looking at a buy-in cost of around $270. This is just the core Marvel game and doesn't include new Disney Originals with characters like Aladdin, Maleficent, Merida, and Donald Duck, featured in interactive fictional narratives that come with the game called "Disney Treasure Hunt." 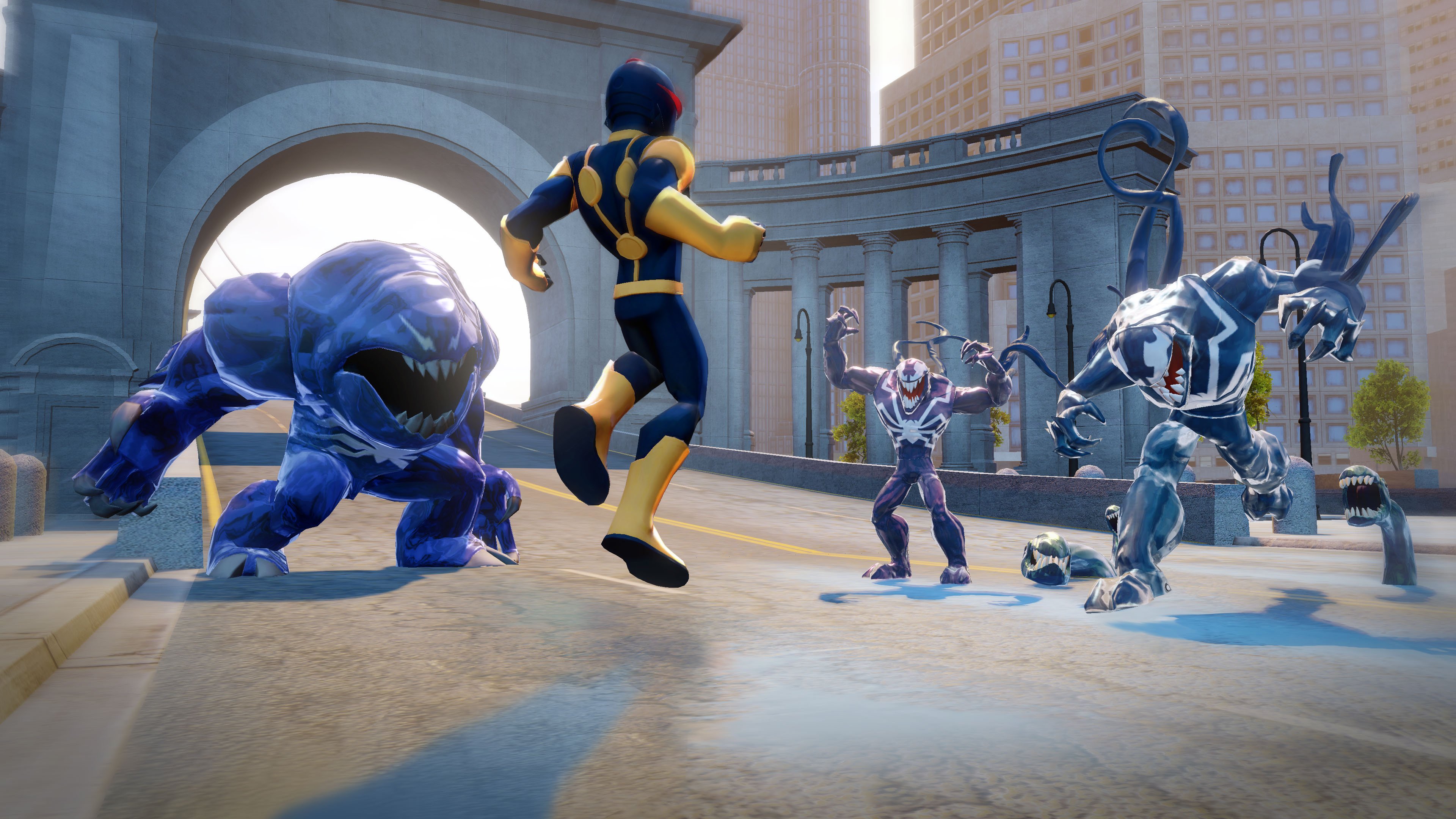 Some levels or challenges in the playsets are specific to certain characters (A Hulk challenge in The Avengers set, for instance), in addition to Crossover characters (Nova and Rocket Raccoon for Avengers, Iron Man and Nova for Guardians of the Galaxy, and Iron Man and The Hulk for Spider-Man) who can literally cross from one playset to another once their content is unlocked by collecting discs with their likeness on them in-level. This is a new feature since Disney characters aren't supposed to interact in each other's worlds outside of the Toy Box.

However, since there isn’t exclusive or crossover content for every character, it’s not necessary to buy everything to access everything. Disney Infinity is also clearly intended as a social game, where players can show off their toys to others by dropping them into their friend’s games with their own stats boosted. Power discs, which can upgrade characters with special powers or change the Toy Box Environment, can be purchased in $5 CCG-like 2-packs in which the discs are randomly distributed for players to trade.

At present, the game can be a little buggy. For example, one game built in the Toy Box introduction had a floor that was supposed to generate as you moved towards it, but it didn't build and I was only able to beat it by using Iron Man's flying ability to hover over empty air while following prompts. Similarly, there were several times I had to restart the encounter by either exiting the level or, in one case, exiting the game. These instances were few and far between, which is notable for a game and game-building system with so much content.

Disney Infinity: Marvel Super Heroes is still an excellent upgrade to both the single player and content aspects of the game. There were moments in The Avengers set where my jaw dropped open as enemies tossed cars around like they were cardboard and errant blasts tore chunks out of buildings, giving the whole experience a truly super-heroic epic scale that I didn't expect. The game releases on the 19th in the UK, September 23th in North America, and today in the EU and Australia.

Disc, base, Play Sets, and figures provided by publisher. Review based on PlayStation 4 version. Also available on Xbox 360, Xbox One, PlayStation 3, and Nintendo Wii U.