Oddworld: Soulstorm, like its name implies, is an odd game. It’s somewhat of a remake of 1998’s half-sequel, half-spin-off Abe’s Exoddus, but also new enough to avoid actually being a straight remake. Such roots plant some parts of Soulstorm in the past, while others put it right on the cutting edge, resulting in a uneven experience with more than a fair helping of bugs.

Soulstorm takes the most advantage of contemporary hardware through its visuals. Stages are gigantic and layered, often giving players a sneak peek at what routes and structures lie in their wake. Abe and his followers can be small on the screen — a byproduct of the zoomed out 2.5D perspective — but this allows the game to play with scale and showcase some impressive level design. Early stages don’t even show all of its potential either as many of the impossibly large facilities in the last two-thirds of the game are natural extensions of what the team started in 1997. It’s faithful to the Oddworld aesthetic but uses today’s technology to better realize it. 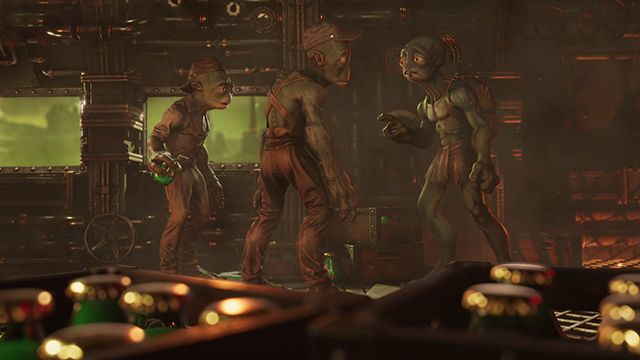 Cutscenes are even more impressive. Each is well-framed and doesn’t rely on the static shot-reverse-shot dynamic that most other games employ. Kinetic angles make every scene engaging and maintain a healthy narrative pace.

Its animation, however, is the true star. Every individual moves with the fluidity and exaggerated style of a Ratchet and Clank game with a level of quality that might even make Insomniac jealous. Characters emote via large, expressive gestures, but also small, subtle ones and both are extraordinarily smooth. Comparing video games to Pixar films is played, but given the quality of the animation and aforementioned cinematic camera, that connection is justified.

The remarkable filmic presentation isn’t there to cover up a bad story either. While still about saving Mudokons at its foundation, Soulstorm greatly benefits from clear and noble character motivations and an engaging mystery. Abe’s reason for visiting levels either helps him directly achieve his goal or unveils yet another secret, making every stage important for one reason or another. Hanging potential pieces to the puzzle at the end of most levels is a compelling way to push players along and drip feed them information that’s not only relevant to this game, but also to future installments of the fabled Oddworld Quintology. 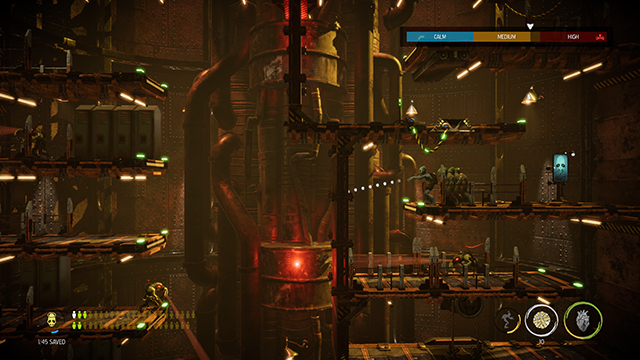 Playing Oddworld: Soulstorm is a lot more uneven than watching it. Soulstorm is a true follow-up to Abe’s Odyssey (or New ‘N’ Tasty), meaning it draws from the same well of stealth, puzzle, and platforming systems. Few, if any, games merge those genres together so even though Soulstorm is cut from the same cloth as the first game from 1997, it’s still quite a unique cloth. Moving through a 2D gameplay space while trying to avoid enemy patrols and save other characters is a loop that still works now and has a thematic consistency that most other games do not have. Abe is a savior and, thus, he saves people.

Figuring out how to bypass enemy patrols is still a tricky puzzle, but allows for experimentation and player ingenuity in a way not previously found in the series. Encounters don’t usually have just one answer as now players can use smoke bombs to bypass enemies, bombs to blow them up, bouncy balls to knock them out, or any of the other tools to reach their goal. The game weirdly takes all the player’s items after each level, which is limiting, and this system heavily relies on tediously searching through lockers, but it’s a smart way to update Abe’s moveset and the gameplay it’s built around. 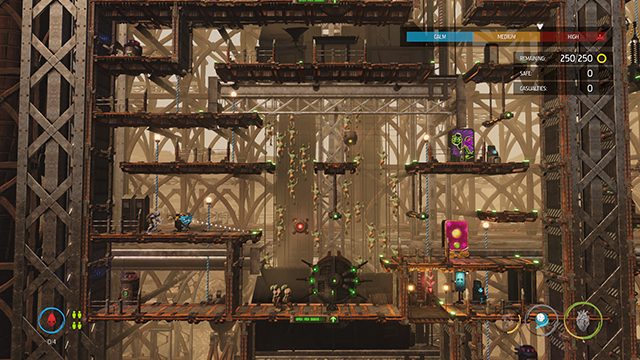 Gadgets also let players save themselves after goofing up, but that window is insultingly small. Sligs are deadly accurate and will often lay waste to Abe without a second thought. Tossing a bouncy ball back in retaliation is often a futile gesture and this routine scenario illuminates the many issues with Soulstorm’s controls.

Abe takes a second to throw whatever he’s holding, which gives ample time for even the slowest Slig to light him and his followers up. He doesn’t even face the right way a lot of the time as the right analog stick doesn’t always reflect where he’s aiming. He falters when he approaches an edge, canceling the aiming process and practically begging for death. So yes, Abe does have more opportunities to defend himself, but the game’s sluggishness doesn’t always give him the chance to properly do so. It’s particularly a nightmare in the game’s more combat-heavy areas where players have to fight the controls and a horde of Sligs with itchy trigger fingers.

This stickiness extends to almost every corner of the game. Abe has to awkwardly position himself before he can hang from a ledge, shuffling about like a picky dog trying to lie down. Some ledges are particularly troublesome, too, and can be difficult to grab. He also has to land directly on the side — not above or below — a swinging pole to grab it or else he falls. Abe is significantly more agile and responsive than he was in New ‘N’ Tasty yet the controls are still fiddly.

Dying from the controls and deadly enemies is a part of the Oddworld way. Trial and error gameplay is expected, but past entries have significantly cut down on the tedium and frustration with quicksaving. Soulstorm is bizarrely missing this feature — a feature that has been a staple in every single entry since Abe’s Exoddus — and is, unsurprisingly, tedious and frustrating. Abe is so fragile and the number of ways events can go sideways means death is inevitable as is playing long stretches over and over again. Replaying sections ad nauseum sinks the pacing as moving forward takes a lot longer since players can no longer inch forward. It’s seemingly such a small feature, but it would have a monumental impact. 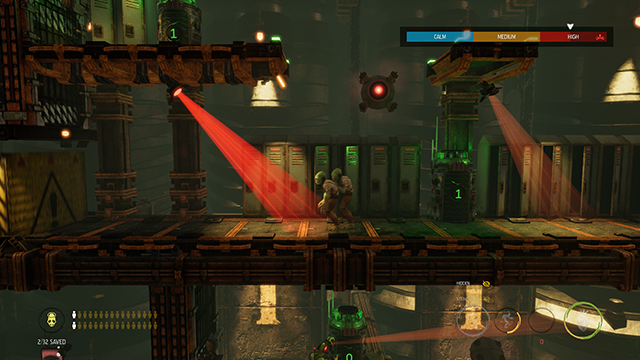 Glitches also kill the pacing as Soulstorm is riddled with more bugs than the nastiest corners of Rupture Farms. These technical shortcomings come in all shapes and sizes from forcing players to restart entire hour-long levels to objects falling through the floor. Mudokon followers, who are already painfully stupid and slow, can refuse Abe’s directions in multiple different ways. Some just can’t jump into live-saving portals while others don’t hide when they’re ordered to; an aggravating reality that can result in a worse ending.

Enemies can get stuck or get caught in place. Some levers might not work. Items or weapons can behave erratically or fail to trigger at all. Doors can unexpectedly lock behind Abe. The “Saving Checkpoint…” message stays throughout the cutscenes. The sheer variety of different bugs means it’s hard to go more than a few minutes without having to suffer through some glitch in one way or another. 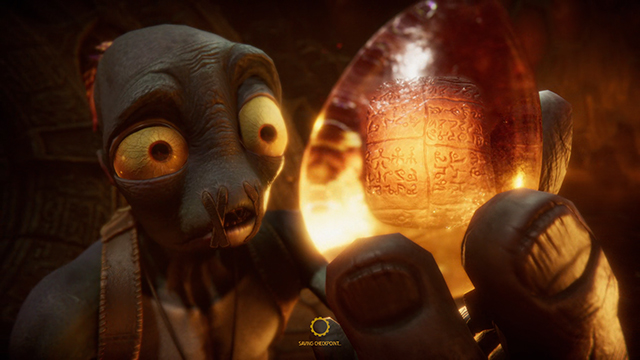 Oddworld: Soulstorm took Oddworld Inhabitants over two decades to fully realize so it’s disappointing that it came out in the state that it did. Numerous bugs are just one part of the problem as its lack of a quicksave and unwieldy controls cause a lot of easily avoidable irritation. Solving its one-of-a-kind sneaky puzzles can be fairly gratifying at times and its impeccably animated cutscenes are nothing short of amazing, but this is a mixed batch of Soulstorm brew that deserved more time in the production factory.

Astonishingly beautiful and well-animated cutscenes. Simple story with an engaging mystery at its center. Gameplay, when it works, is still…
Friday

Astonishingly beautiful and well-animated cutscenes. Simple story with an engaging mystery at its center. Gameplay, when it works, is still…
February 10

Astonishingly beautiful and well-animated cutscenes. Simple story with an engaging mystery at its center. Gameplay, when it works, is still…
February 21

Astonishingly beautiful and well-animated cutscenes. Simple story with an engaging mystery at its center. Gameplay, when it works, is still…
February 24

A frustrating way to start a game.
Games 16 hours ago

What can be used for the challenge?
Games 4 days ago