Nintendo Switch OLED Review: Is it worth buying?

If you’ve got an original Nintendo Switch and really don’t want to fork out the cash for the new Switch OLED, then a word of warning: don’t try it out. If a friend offers to give you a blast on theirs, or a passer-by tries to force the portable console into your hands, then drop your bags and run far, far away. If you’re an original Switch owner who does not want to spend money on an unnecessary upgrade, then you won’t want to spend even a minute of your time with the Switch OLED. Doing so will make your current console feel completely obsolete by comparison.

Is the Nintendo Switch OLED worth the upgrade? The Switch OLED isn’t a huge overhaul of Nintendo’s handheld/home console hybrid, but it benefits greatly from the system not having had any major improvements since its launch. The Switch Lite wasn’t a step forward but rather a step sideways, focusing on the portability of the console and nothing else. While that’s much the same with the OLED — no improvements have been made to the console when in docked TV mode — the visual impact of its new screen and its new premium design are big changes for the aging hardware.

The Switch OLED — or SWOLED, as it should have been called — couldn’t have launched alongside a better game than Metroid Dread. Its new 7-inch OLED screen works wonders with its dark and eerie setting, as the display creates true black that makes other colors pop. Samus Aran’s shiny red suit has never looked better than here, and it’s a remarkable difference when placed side-by-side with the comparably washed-out colors of the original console. Although it still displays in 720p in handheld mode, the larger screen and slimmer bezels give it a far more premium feel, while its OLED display makes its games look a lot better even if they’re not technically outputting at a higher resolution.

But it’s not just true black where the OLED screen makes an impression. Although this isn’t the jump to a 4K resolution as reports suggested it would be, everything looks remarkably better in handheld mode by virtue of this lovely screen. Its colors are now more vivid than ever, and while the screen isn’t technically brighter, improved contrast makes it seem like that’s the case. I was particularly impressed by how visible even dark games like Metroid were to see when playing outside on a sunny day — it’s not quite anti-glare, but it is a huge improvement over the original Switch. 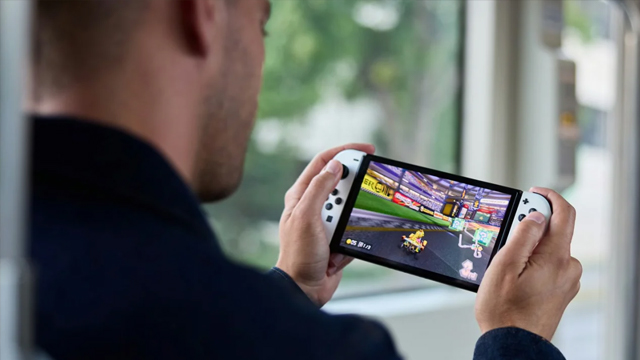 Then there are the upgrades to the design of the Switch itself. These aren’t mammoth redesigns, but rather a number of notable additions that make the system feel like a premium purchase. The first is the kickstand, which now stretches the entire length of the console (minus the Joy-Cons) and is much sturdier this time around. The previous Switch’s flimsy kickstand ensured that the console would fall over with the slightest movement, so this change makes tabletop mode a much more viable option for flights and train journeys.

The dock has had some new additions, too. Its rear now features a curved gap for wires to fit through, while a built-in Ethernet port ensures that WiFi is no longer a necessity for online play in docked mode. It also boasts the lovely white coloring of the Switch OLED itself, which may not be as fun as the red and blue design of the original, though fits in a lot better next to my PS5 and Xbox Series X.

The audio quality has received some significant tinkering, too. Given that the Switch OLED’s larger screen (it has an inch over the original’s 6-inch screen with a much slimmer bezel) means that there’s also less space inside the console, it’s remarkable how much clearer it sounds. While it lacks bass and has the tinniness of most portable devices, it no longer makes headphones an absolute essential when playing in handheld mode — though it’s still preferable, especially with its Bluetooth connectivity.

The Nintendo Switch OLED isn’t the massive step forward a 4K Switch would’ve been, but it’s far better than its relatively underwhelming announcement would lead you to believe. It certainly isn’t for everyone — those who rarely play their Switch in handheld mode aren’t given much of an incentive to buy it — but for players like me who always play when on the go, it’s a must-have upgrade. If you try the OLED, trust me: you won’t be able to go back to the original Switch.

What do these eShop changes mean?
News 1 day ago

Some people aren't happy about the rerelease.
News 1 day ago
8