The Book of Boba Fett Episode 3 Review: ‘The closest Disney has got to the prequels’

The Book of Boba Fett episode 3 finally feels like the Disney Plus series is coming into its own, pulling further away from Fett’s post-Sarlacc story and into new, sillier territory for Star Wars. This includes space Vespas, cyborg biker gangs, and a pet Rancor, marking the show’s first true step out of The Mandalorian’s shadow and into something enjoyably sillier.

How The Book of Boba Fett leans into the prequels 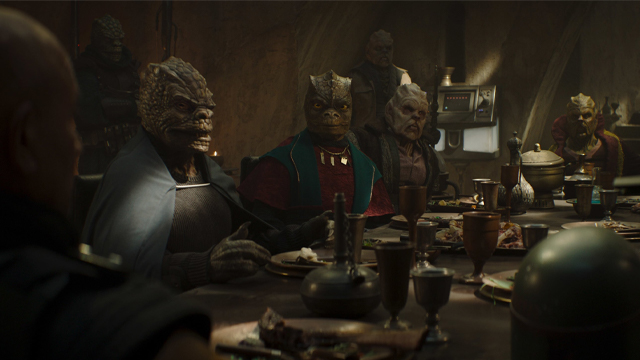 Previously, The Book of Boba Fett has preoccupied itself with the story of Boba Fett’s days after escaping the Sarlacc pit. This included an unlikely bond with his Tusken captors and the introduction of the Pyke Syndicate. Star Wars has an unfortunate habit of unveiling all of its mysteries, and it seemed like its latest series was primarily focused on doing just that. Fortunately, episode 3 leaves the flashbacks in the background, now expanding on the much more interesting story of Boba’s struggles as Tatooine’s Daimyo.

The Hutt twins have established their presence, Mayor of Mos Espa Mok Shaiz remains an untrustworthy figure in the background, and news of a biker gang with cybernetic enhancements makes its way to Boba. On top of this, the realities of life on Tatooine start hitting closer to home for the ex-bounty hunter; the struggles of the people on the sand planet continue regardless of the Empire’s downfall.

Clear parallels are made to real-world politics — regardless of who’s in power the working class struggle, and the cost of living increases while the cost of labor doesn’t. At the center of this is Boba, a crime lord by title but one who clearly wishes to do good by Tatooine’s citizens. Unfortunately, those citizens don’t respect him, with him appearing timid compared to Jabba’s reign of fear.

And so The Book of Boba Fett finally begins to make good on its central premise — that Boba Fett wants to rule with respect, not fear. Episode 3 finally begins to show the complications of such an arrangement, even if some of the outcomes are incredibly fortuitous — the young cyborg gang is incredibly eager to tie themselves up in Boba’s affairs — but it’s a far more interesting angle than Boba’s friendship with the Tuskens.

In the prequels, we were given a broad look at the politics of that galaxy far, far away from the perspective of those in control of the outcomes. In The Book of Boba Fett, we get to see those politics played out on a smaller scale. If the prequels are about the United Nations, then this series is about local government, struggling for influence within their own small population following a war they were bystanders to. For long-suffering fans of the prequels such as myself, this is a welcome step back into some of the themes of Episodes I–III that have been overlooked in the Disney era thus far.

However, some of the issues that have thus far plagued its characters remain present. Boba Fett continues to feel like an RPG video game character who routinely chooses the “good” option, with there being no character arc to explain his move away from ruthless bounty hunter. Fennec Shand exists to enforce everything he says, with there being no compelling relationship between the duo. Then there are the new cybernetically-enhanced youths they’ve enlisted, nameless and indistinct aside from them looking cool. Hopefully, the series fleshes out this herd of new characters in future episodes.

The Book of Boba Fett Episode 3 Review: The final verdict

Still, The Book of Boba Fett episode 3 leans into the show’s more interesting characteristics, even if it struggles with its characters. As close in theme to the prequels as Disney’s Star Wars has been so far, this will be off-putting for some, but for those of us who enjoyed George Lucas’ flawed trilogy it’s refreshing to see it being acknowledged again.

Disney Disney Plus The Book of Boba Fett

I am no Jedi.
News 1 month ago

That's one way to deal with conflict.
News 4 months ago
9

What to Watch Before the Kenobi Release Date on Disney Plus

Hello there.
Originals 8 months ago