The Wii U was no fiscal success, but without Mario Kart 8 it would have been a money-bleeding liability. The game that brought us Luigi’s Death Stare, MKTV, and single-handedly revitalized its host console (sporting crazy high attach rates) was a reinvention for Mario Kart, and despite its success deserved to be played and owned by at least twice as many people as it actually was.

Mario Kart 8 has returned on Nintendo Switch as Mario Kart 8 Deluxe, awarded the second chance it rightfully earned and sporting a fancy new Battle Mode among a smattering of other frills, enhancements, and a boatload of included DLC. The package is compelling on paper, but is it really worth revisiting for a full $60? Read on to find out.

An immediate perk of porting a game just three years after its release is that the game itself ages quite well. At its core, Mario Kart 8 is still a cutting-edge kart racer, the best and prettiest Mario Kart, and a monster of a party game, just like it was on Wii U. What’s changed this time around (beyond Battle, which I’ll get to later) is essentially a visual upgrade and extras, the former delivering subtle but appreciated aesthetic gains and the latter appeasing stickler, detail-oriented fans, particularly those of the Double Dash!!-adoring persuasion. There are also optional features designed to make Mario Kart more accessible, including smart steering and auto-acceleration.

Regarding graphics, the upgrades are simple – Mario Kart 8 Deluxe runs at a full, native 1080p, a substantial upgrade from the original’s 720p, and retains the 60fps found on Wii U as well. In short, the end result is gorgeous; at the moment, this is the prettiest Nintendo game there is. Somehow thwarting its complete lack of anti-aliasing, Deluxe in motion is like the pre-rendered concept art in Nintendo game manuals finally come to life, its Battle stages in particular flaunting Nintendo EPD’s considerable visual chops. Locales like the new Lunar Colony and Sweet Sweet Kingdom are the best examples of this, and need to be seen in motion to be truly appreciated. For a racer that probably doesn’t need to look as nice as it does, Mario Kart 8 Deluxe goes the distance. 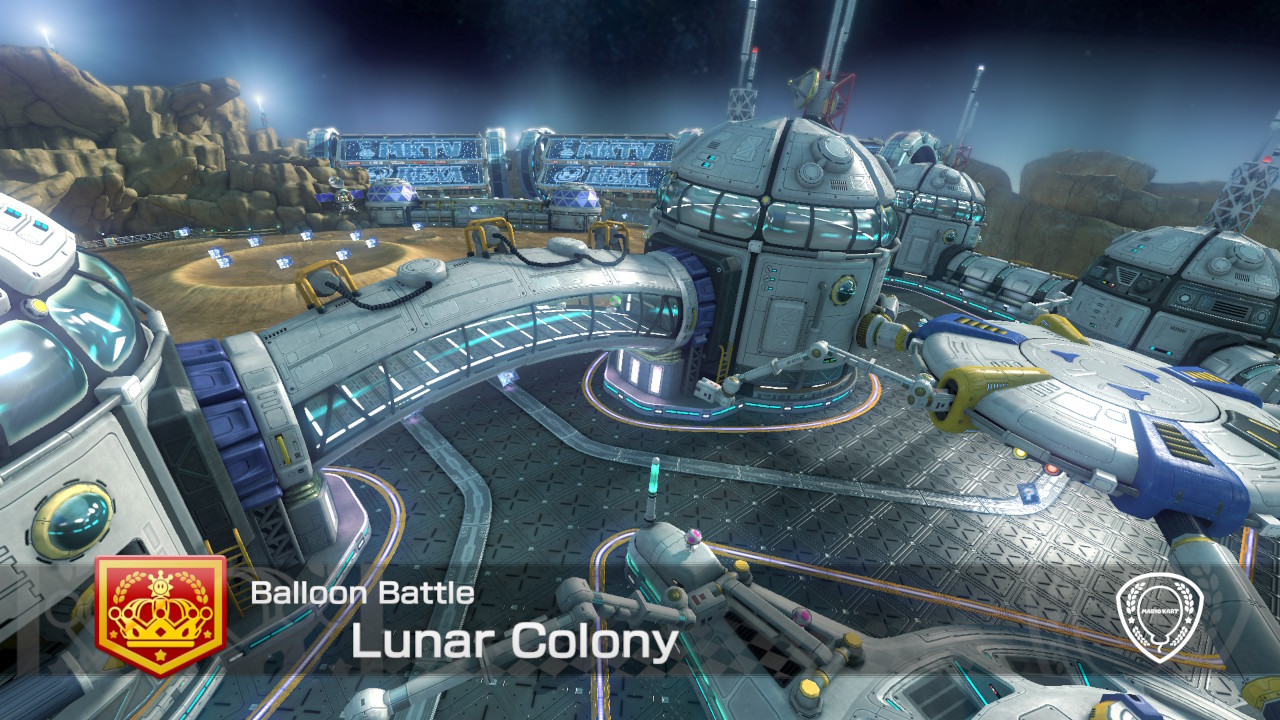 With logistics covered it's on to gameplay, and the major add here is a Battle Mode that finally mimics the classic, balloon-oriented mechanics found in previous versions. Foremost is standard Balloon Battle, where players zag across clever arenas and use items to rupture each other’s balloons. You can now hold two items at a time, which adds to the chaos, and inserts a layer of strategy to the proceedings that is definitely welcome. Outside of Balloon Battle there’s also Renegade Roundup, Bob-omb Blast, Coin Runners, and Shine Thief, most of which have appeared in other Mario Karts, rendering Renegade Roundup the resident newcomer.

It’s no spoiler to state off the bat that all of these modes are fun, and unlike Grand Prix, Mario Kart’s battles have never been about winning. Instead, it’s about embracing frenetic, shout-laden multiplayer, preferably of the local variety. 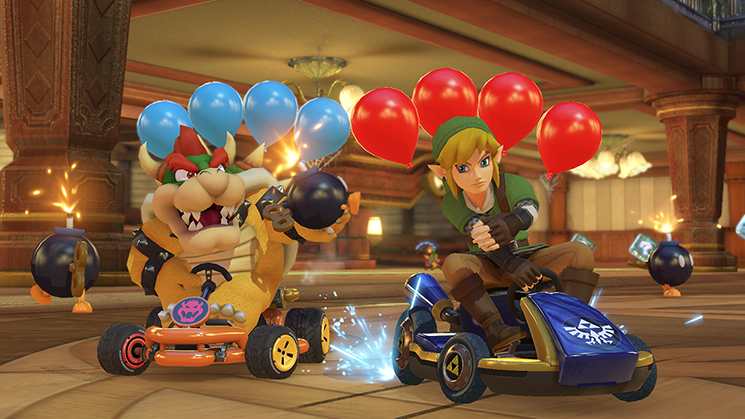 Coin Runners involves collecting the most coins before time runs out, Bob-omb blast sees contestants hurling only Bob-ombs when hitting item blocks, and Shine Thief returns from Double Dash!! largely unchanged. This requires the winner to secure a Shine Sprite in order to end a match that will otherwise continue, as the Sprite is bandied between racers continuously ramming each other, hurtling shells, dropping bombs, and generally unleashing fury that would probably be quite hellish were this not an overwhelmingly endearing cartoon. Thankfully it is, and thankfully Battle is still overwhelmingly fun.

The new mode, Renegade Roundup, earns bonus points for creativity, but is also probably my least favorite. Roundup assigns players to either the “Renegade” or “Authorities” team, essentially a cops and robbers scenario that places Renages in jail when damaged. If all Renegades are jailed when time sounds, then the Authorities win. If any roam free, then the Renegades reign supreme. I suspect this is a mode that may actually lend itself well to online play (the added strategy seems well-suited), but in real life with non-gamer friends it just seemed a confusing. Still, as a single added mode it's fun and creative, and is hardly an unwelcome addition. 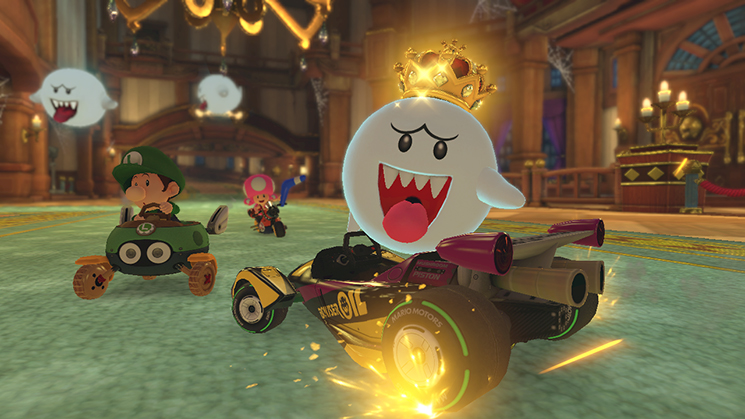 There are Switch-only quirks at play with Mario Kart 8 Deluxe that you’ll want to keep in mind, and many of them boil down to actual hardware differences between Nintendo’s hybrid tablet and the Wii U. For all of its flaws, the Wii U GamePad is one of the more cozy and ergonomic controllers around, and the same can be said of its Pro Controller and Wii Remote options. Sans any of the those, Switch is left with Joy-Cons, grip-docked Joy-Cons, and its own Pro Controller. If you own the latter then great, but otherwise you may be in for a bit of discomfort.

Unlike with Zelda: Breath of the Wild where I found the Joy-Cons to be a pleasure to use, the tension and physical duress of kart racing makes the flimsy, rectangular nature of Nintendo’s detachable plastic ingots readily apparent. I found my fingers and thumbs getting tired consistently, something I’ve never really experienced playing videogames, and the rumble that pervades most of the Mario Kart 8 experience felt chintzy and cheap compared to what I’m used to. The actual function of the remotes is fine, and I’ve never bought into Joy-Con wireless interference hysteria, but the fact remains that these devices do require a clear signal-shot toward the docked Switch to work properly. 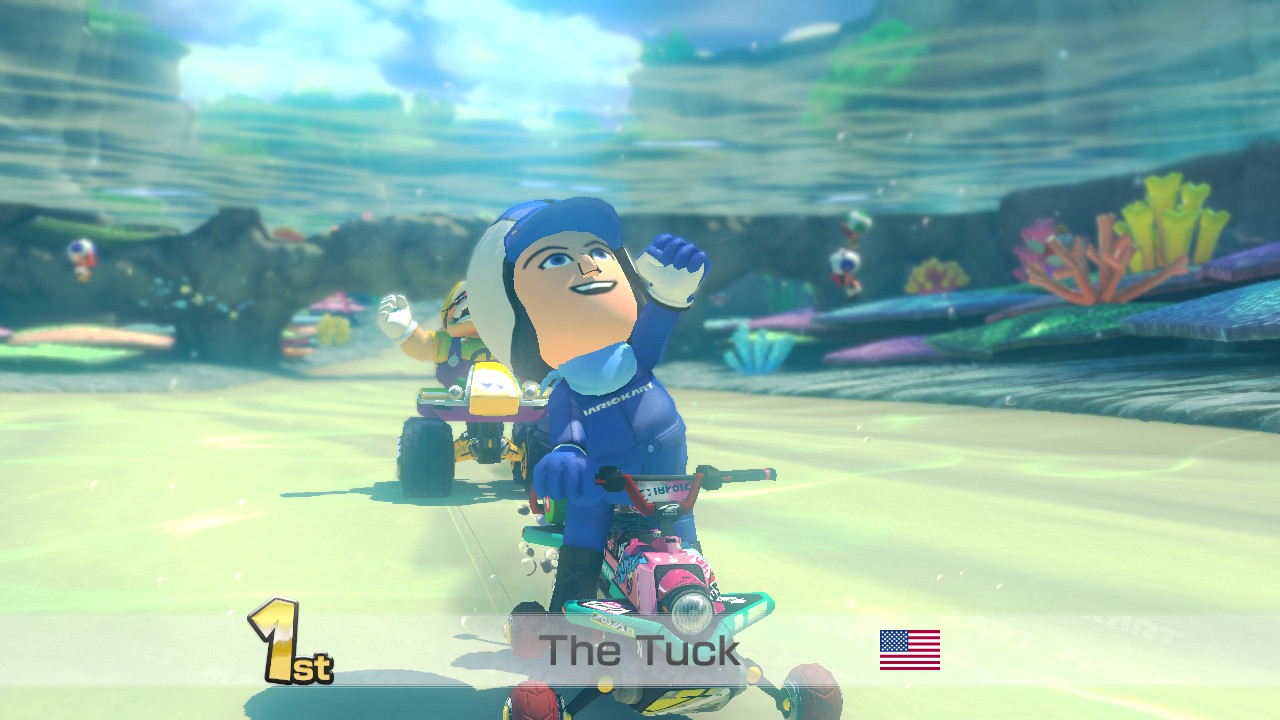 As such, I did have fleeting moments of input lag that sent me careening off of ledges or into walls, and though I’d notice soonafter the Joy-Cons were aimed astray or half toward my leg, this was never a problem with the Wii U GamePad, nor is it an issue with DualShocks or most modern controllers. I don’t hold this against Mario Kart 8 Deluxe too strongly, but it can’t be ignored, and since I feel these issues are specific to the tense nature of racing games (like I said, Zelda was fine), it’s worth mentioning. The easy solution, if you can, is to get a Pro Controller.

More heartening was my experience using each Joy-Con as its own unique remote for multiplayer, and despite the cramped nature of this approach, it is somehow equal parts less tiring and more responsive than wielding both. This is great news for players looking to emulate the seamless, kickstand multiplayer shown in Switch demo videos, and I can confirm that doing so is not only viable, but extremely fun. It takes getting used to, but I adapted to the miniaturized layout over the course of a single race, and as nutty  as it sounds, players experiencing reception or fatigue issues may actually prefer this method. Regardless, the fact that Switch-specific capability such as this delivers is impressive, and the notion of easy-access multiplayer in wake of boxes upon boxes of assorted Wii and Wii U-era plastic remotes, attachments, and GamePads is refreshing indeed.

There’s more to the Mario Kart 8 Deluxe story, including new items (the Feather for jumping and Boo for item-swiping) as well as an additional level of Mini-Turbo (dubbed Ultra Mini-Turbo) denoted by pink sparks, following the orange and blue sparks before them. What you ultimately need to know, though, is that this is still Mario Kart 8, it’s still a superb racer, and it’s now in glorious 1080p. All of its Wii U DLC is included, so while previous MK8 buyers may not by default upgrade if they already invested before, anyone else currently sporting a Switch absolutely should.

Mario Kart 8 Deluxe is the definitive edition of a franchise-defining kart racer, no longer constrained by Wii U’s teensy install base and poised to dish out hours of enjoyment from its new hybrid home. Not everyone will be tempted, but if you missed the original Mario Kart 8, it’s an absolute must-buy.

"Mewtwo has a lot of trauma."
Originals 3 weeks ago
8

Highlights include Pokemon Scarlet and Violet.
News 3 months ago