Being deceived has never been so much fun.


While Battlefield 3 and Modern Warfare 3 duke it out on the FPS field, Uncharted 3: Drake's Deception is here to provide another blockbuster-inspired adventure as an alternate flavor of fun in this season of "3s" that is upon us. Among Thieves was quite an act to follow, so it's no surprise that Drake's Deception may not blow your mind the way that one did, but this is more a testament to just how high a bar Naughty Dog has set in the interactive entertainment field. Nathan's third journey may be aiming to deceive you in a number of ways, but don't be fooled: This is yet another game-of-the-year contender.

Without spoiling the details, Drake's Deception is a layered title with many meanings, and the story definitely has a more serious spin than it has in the past. There are some notable moments that pass into something I would consider expected of a grade-A action film. The team's approach to motion-capture is clearly advantageous, as it lends scenes an extra dash of realism very few games manage to create. It admittedly follows a similar formula in narrative structure as Among Thieves did, but this fine—seeing as that formula worked out very well—especially since the settings are entirely different, and there's a much heavier emphasis on backstory and exploring the characters' motivations.

Unfortunately, the villains don't get as much depth as they could have, and while the curves and twists the tale takes are engaging, the way everything ends feels just a tad rushed in comparison to the second title's climactic scenes. But this is a criticism made only after comparing it to Among Thieves. The yarn that Uncharted 3 spins is wild, entertaining, leaves just enough mystery to let the player theorize, and leaves you wanting more in the best way.

Now, perhaps man-love between Nathan and Sully—and discussions revolving around the latter's nice ass— isn't exactly why you play this series. You enjoy it for the rush, the excitement, the scope of the locations… Drake's Deception definitely kicks things up a notch in this regard. The train scene in the last title was probably its greatest technical achievement, and there are multiple sequences like that here, including a pair of chase scenes that are two of the most entertaining I'd say I've ever played through. But it's not only "run and gun, scale walls, run into the camera away from danger" that goes on. The journey takes a few turns that slow the pace down a bit in smart ways. Pacing, after all, is optimal when there are highs and lows in well-placed interval—and this third installment probably provides the best in that regard.

There are still old, dilapidated buildings to explore, ancient mechanisms that don't seem physically possible to figure out, and a few puzzles that require a different approach than we've seen in past Uncharted titles. Uncharted 3 tries new concepts that the series hasn't done before in its environments, always using these new ideas to shake up the cover-based shooting gameplay. Sometimes this means making things more vertical; other times it means shifting terrains that make enemies—and cover itself—wobble around. 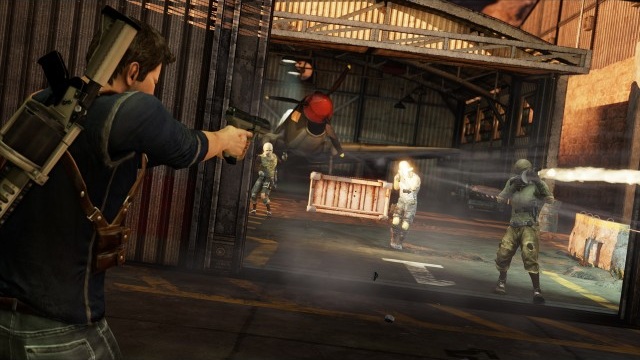 The melee combat has some more detail put into it as well. It's not much compared to combat-oriented games, but you can tell the team poured more effort into it, and context-sensitive attacks seal this fact. Seamlessly slapping an enemy with a fish from a vendor's market table or slamming him against a nearby wall can be hilarious and immersive. Enemy layouts and behaviors seem more challenging than they have been too, ensuring that veteran players will still be forced to approach the high-intensity fights with some thought. Fisticuffs, shootouts, parkour chases, high-speed tomfoolery, philosophical contemplation—all here, all engaging.

The level of visual detail is still striking, even after the way Among Thieves harnessed the Playstation 3's hardware. Drake's Deception is, like its predecessor, one of the best-looking games out there right now. Part of this has to do with the detail in its modeling and textures, the craftsmanship of the design (some of the structural touches are really something), and the sense of magnitude and scale the game manages to produce. Just like God of War 3 before it, the game occasionally pans out wide to show off the massive environments, flexing its graphical biceps. The character animation can't be understated. Nathan's model probably has more frames of animation than any other character I can think of, from his various climbing to the swagger in his step whether in full-on sprint or when weary and dehydrated.

When playing multiplayer or co-op, things lose a layer of polish, but in cut-scenes from the campaign, things look quite fantastic, combining live performance, genuine voice acting, and facial tweaks that sell the experience. Eyes, in particular, are difficult to capture properly without coming across as artificial, but this game pulls them off without difficulty. The voicing is some of the best in the biz, and though the actual sound effects themselves aren't specifically wow-worthy, the music hits all the right notes from what you'd expect of a Lawrence of Arabia-style flick. On a technical and artistic level, the end product of everything the game has to offer is a world that feels full to the brim with detail and variety, taking full advantage of that big HD screen and surround sound setup you have. 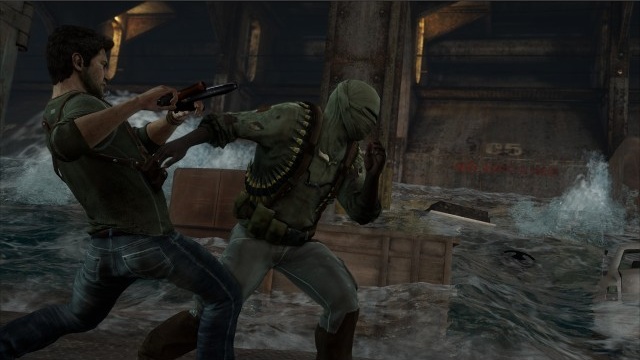 There are a few prices to be paid, however. Texture pop-in can be a problem on numerous occasions, especially in multiplayer, and because of how seamlessly Nathan can maneuver most objects, it can actually become a bit confusing as to what he can and cannot scale in certain environments. There's an “Oops, guess I can't climb that” animation that you will become quite accustomed to in areas where it's not quite as clear how to traverse the environment. When locked into melee combat and under fire, I found it difficult to evade and run and hide, since the face buttons perform different actions in this context than they do normally.

There's also a trade-off in that the game doesn't have as much humor as the last game did, since it focuses more on emotional impact. Really, though, these are all criticisms for the sake of nitpicking given the size and breadth of all the game's campaign manages to accomplish—which is a lot more than most games do. The better something is, the more noticeable its few flaws become, like fingerprint smudges on that shiny new device.

After the campaign is done (which took me, an Uncharted veteran, about 8 hours on Normal), there's still a lot to keep you busy. Co-op has its own separate story of sorts this time, taking the concept used in the second title, refining it and expanding it with some new ideas. It can even be played two-player in local split-screen, if you like (though I oddly couldn't use my actual account info that I use to play online). Likewise, split-screen can be used for LAN party modes and online for competitive multiplayer action. 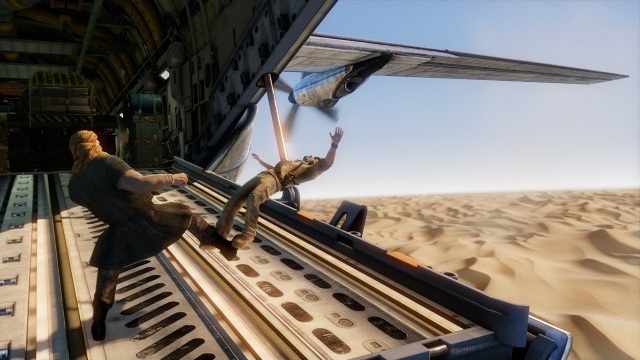 While it will probably be debated for some while to come whether or not Among Thieves or Drake's Deception offers the better overall campaign experience, the multiplayer has been extremely improved. More modes, options, and goals abound. Character customization is more detailed, though still oddly a bit lacking for the main heroes themselves, something that may change via patches and DLC, as it has been altered quite a bit even since the beta this summer. Loadouts can be swapped mid-match, and there's a lot more options to be found, such as weapon modifications and the new medal kickbacks, which are special abilities that can be activated when enough in-game achievements are earned during the course of a match.

There are even some multiplayer environments that borrow ideas from epic scenes in the campaign to create competitive maps unlike anything you'll find in most shooters out there—not to mention the parkour-based gunplay that already differentiates it from a lot of other multiplayer experiences to be had. Even the few maps that have been brought back from the last game have been revamped with a few tweaks and big visual overhauls so they still feel fresh.

There's so much more to do in multiplayer on a metagame level, and it all contributes to expanding your characters' abilities, that even losing feels like progress. Missions award extra cash to buy upgrades, treasures unlock customized weapons and clothing, and your boosters (or perks) can be leveled up by performing actions that reinforce their advantages.

Uncharted 3: Drake's Deception provides one of the most technically impressive adventures you can find, matched with a detailed and unique multiplayer, all while making it easy for a newcomer to pick up and enjoy. Drake's Deception is why most gamers play video games—experiences that keep us awed and engaged, and extra content to keep us coming back for more. It's definitely one of the most well-produced games you'll find available this year. It's hard to say whether it concretely surpasses its predecessor as an overall campaign, but with a much-improved multiplayer and more ambitious settings in its single-player, you'll be hard-pressed to find many games this generation that can match its scope and prowess.

Watch out, Annabelle.
News 3 weeks ago

Here are all of the bug fixes and new additions.
News 1 month ago
8