Way of the Samurai 4 Preview

The way of the samurai is ka-ray-zeh.

The first cut-scene I saw of The Way of the Samurai 4: A man stripped of all clothing except for a fundoshi while tied to a spinning, red torture wheel and interrogated by a trio of three boxum Japanese ladies in pink kimonos. Another man in a jail cell nearby cries out to the three women begging to be the next victim.

After taking a three-minute bathroom break, I return to watch another person demoing the game and this is what I see:  A woman, also stripped of all clothing except for a fundoshi, leaping into the air and jump-kicking a British royal musketeer with the brunt of her right foot.

When not being completely wackadoo, Way of the Samurai 4 explores the arrival of Commander Perry in his "Black Ships in Uraga" that ended Japan's isolation from the world in the early 19th century. This naturally creates tension between the British who wish to establish silk trade and the temple disciples who see this as a taint on the purity of their culture. At the same time, the police and the yakuza have their own struggles against each other on the street. Of course as the lone samurai, you can choose which side gets the edge through missions, or by simply killing specific flunkies on the road like yakuza underlings, and thereby receive one of ten different endings.

That said, the story isn't really the point; the developer watching over the demo stated that the main storyline, if you were to rush through it, only takes several hours. The real fun lies in all the goofy side quests and ridiculous randomness, like slapping a British lady so hard that her umbrella flies into the air and then, after she's feinted on the ground, lifting her skirt for a hidden item. Or you can try romancing the lady and playing a, cough, mini-game. 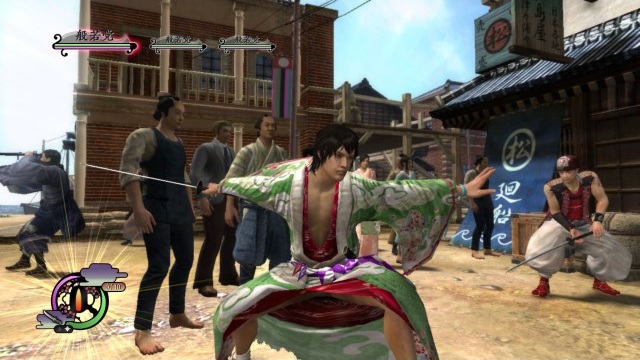 If you're looking for a less raunchy mode of expression, you can also gamble, craft new weapons by collecting scrap metal and looted swords, and erect new buildings in the city of Amihama. This includes a dojo where getting additional followers nets extra skill points and additional techniques which will expand combat possibilities, and a language learning school where the player character can learn English to understand the "????!!!?!?!?!" that the British NPCs are saying. (I need to learn English to understand them too…)

Way of the Samurai 4 is planned for release exclusively on PS3 this Summer 2012.

One powerful lineup.
Originals 3 years ago
8

Judgment Review | Punching your way to a serial killer

Private eyes, they're watching you.
Games 4 years ago

An Xbox One demo is also planned.
News 4 years ago

The young ice maiden joins the fray.
News 4 years ago